The actor reportedly indulged in some authentic Indian cuisine, cocktails and rose champagne at the venue. Hollywood star Johnny Depp - who recently won a high-profile defamation case against his ex-wife, actress Amber Heard - has been in a celebratory mood ever since the verdict was out after weeks of trial. The actor’s impromptu performance with guitarist Jeff Beck in the UK recently got him a lot of attention online. And now he is back making headlines again after dining at an Indian restaurant in Birmingham, where he spent a whopping $62,000 for a lavish Indian meal. The actor reportedly indulged in some authentic Indian cuisine, cocktails and rose champagne at the venue.

According to the ‘Varanasi’ restaurant in Birmingham, Johnny dropped in for dinner on Sunday night along with Jeff, and it looks like the duo had an amazing time there. The restaurant took to Instagram to share the news and posted a couple of pictures of the two with their staff members and management. Take a look: 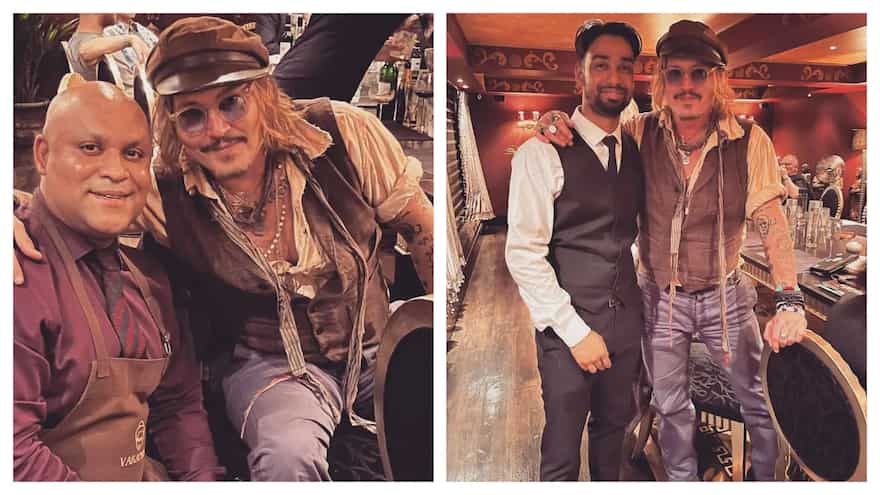 “The most talked about person on the planet right now joined us for dinner last night ! We had the greatest pleasure to be in the presence of Johnny Depp @johnnydepp and Jeff Becks @jeffbeckofficial! What an amazing and humble experience. Only at Varanasi Restaurant!”, read the caption on the post.

The pictures immediately went viral and the news has been creating a buzz on the internet since then. Why? The massive amount of money that the 58-year-old actor paid at the Indian restaurant. The Pirates of the Caribbean star spent more than $62,000 for the special, celebratory dinner with his friends, a report in The New York Post stated.

While speaking with the Post, Mohammed Hussain - operations director at the restaurant - revealed how they got to know about the actor’s arrival. “We had a call out of the blue on Sunday afternoon saying that Johnny Depp wanted to come to eat with a group of people,” he said. Johnny’s final bill was reportedly around £50,000 (over ₹48 lakh) in total. He stayed there for nearly three hours, and also met the manager’s friends and family. Wondering what all he could have had at the restaurant? We’ve got deets!

Varanasi, known to be Birmingham’s largest Indian restaurant, offers an elaborate feast. Its menu is a ‘continually evolving one’, which has ‘some classics, some reworking of old favourites plus new dishes for each season’.

From street food of India such as papdi chaat and pani puri to royal treats like tandoori lamb chops and nawabi lamb seekh, the appetisers are as expansive as you could imagine it to be. The main course is no less as it offers everything from Nawabi to Lucknowi biryani, prawns from the malaba to the classics like butter chicken, dal makhani and kadai paneer.

The menu at the restaurant is making us guess that the Hollywood star indeed has a liking for robust Indian delicacies.

Your Guide To Have The Best Chaat In Varanasi

Your Guide To The Best Lassi And Thandai In Varanasi

From Chura Matar To Malpua: Dishes You Must Try If You’re In Varanasi