Janhvi reshared and replied to Arjun Kapoor's story with a demand that only a true foodie can relate with. Actress Janhvi Kapoor who was last seen in the horror-comedy ‘Roohi’ with actor Rajkummar Rao, will soon be pairing up with Varun Dhawan for another comedy. The actress also walked the ramp during the recently concluded Lakme Fashion week, but right before that she polished down some yummy tacos and pasta. The ‘Dhadak’ actress is a big food buff, and her Instagram feed is proof. She also likes to visit new places and explore the local cuisine. The last time she was in Rajasthan for close to two days, she did not forget to try the epic Rajasthani Thali with Ker Sangri Sabzi, Saag, Rice, Dal and Roti. Despite being one of the fittest actors of the generation, it seems like Janhvi almost, always has food on her mind. This is perhaps why, when actor Arjun Kapoor, shared a cute video tagging Janhvi and his other sisters like Sonam Kapoor, Rhea Kapoor, Anshula Kapoor and Shanaya Kapoor. Janhvi reshared and replied with a demand that only a true foodie can relate with.

In the video shared by actor Arjun Kapoor, we share a little girl trying hard to come down the trampoline, so her little boy, supposedly her brother, goes down on his fours, so the girl can mount on his back and climb down easily. “Next Raakhi this is my gift to you guys”, Arjun wrote in his caption tagging Janhvi. Janhvi replied saying, “This and some Tiramisu Plz”. 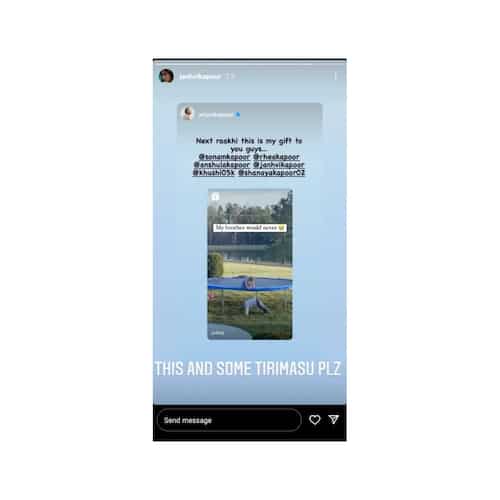 What Is Tiramisu? Can You Make It At Home?

Tiramisu, as we all know, is a popular Italian dessert, which literally means ‘pick me up’. This coffee-flavoured dessert is made of ladyfinger biscuits that are soaked in coffee. It is layered with a whipped and creamy mixture of eggs, sugar, mascarpone cheese. The dessert is dusted off with cocoa powder. The dessert has found fans across the globe, even in India, pastry chefs are building on many Tiramisu-flavoured desserts, we have Tiramisu cakes, puddings and what not. But if you are craving the classic Tiramisu like us, here’s a recipe that is sure to impress. If you manage to source the best quality ingredients, you can make bakery-style Tiramisu at home as it is quite easy to put together.

Try this recipe soon and let us know how you liked it. Do not forget to share the pictures with us.