Move Over Biscuits, Indians Love These 5 Things To Dunk Into Tea

Not just biscuits, Indians love to dunk many other food in their cups of tea. It has been a ritual in many households of the country. It was a rainy Sunday morning; my neighbour served me a cup of steaming hot tea. The wafting aroma of ginger and elaichi arrested all my senses. But suddenly, my joy disappeared into thin air. She served nothing to dunk into my cup of tea. And my inner voice poked me to ask that awkward question: Bas chai? (Only tea). With a bit of embarrassment, she replied, biscuits are over. Would you mind having last night's parathas? My eyes twinkled. It was an instant yes. Next, we enjoyed our cup of tea by dunking leftover parathas. You will love to read this piece if you resonate with me in this scene.

Indians often begin their day with a hot cup of tea. The love for this hot beverage has steadily increased. During the fiscal year 2021, India consumed over 1.1 billion kg of tea. Although black tea is relatively widespread, most Indians enjoy their brewed tea with milk and sugar as a sweetener, which is today known as Chai Latte in cafés worldwide.

Indians and their obsession with tea don't end just at the cup of this hot beverage. Dunking almost everything into their favourite drink is a practice practically passed from generation to generation as an unsaid ritual. Here are 5 non-conventional things that many of us love to dip in our teas.

In many Indian families, breakfast is about freshly made plain parathas and tea. Curries go missing from the scene. Instead, the members bond over chai and chatter while dunking the parathas, often rolled vertically to get an easy grip. On the other side, a few make extra parathas at night and the following morning; the one-night-old parathas keep the biscuits away.

Basi or stale doesn't literally mean rotten or expired, but prepared, not freshly. Usually, the women of the house love to begin their day with a leftover roti by dunking it in the tea, taking a bite and making mental planning of the tasks for the day. Such roti, in fact, tastes better than the fresh ones. Many of us have nostalgic memories around it. Janhavi Prasad once replied to a twitter post by well-known food critic Marryam H Reshi, how her childhood memories are filled with basi roti and chai. And it's fascinating to watch cafes in London having it on the menu.

We know puris as a mainstay for many festive or special food spreads. These deep-fried Indian breads are usually served with curry or bhaji and different savoury dishes. But there are many Indians who love to relish their puris by dunking in tea. Instead of freshly-fried ones, the preferred choice is puris, made the night before.

Though it doesn't have an Indian origin, the natives of this country have made it compatible with tea. A crisply toasted slice of bread, slathered with butter, is often a most-relished accompaniment to dunk in the tea. 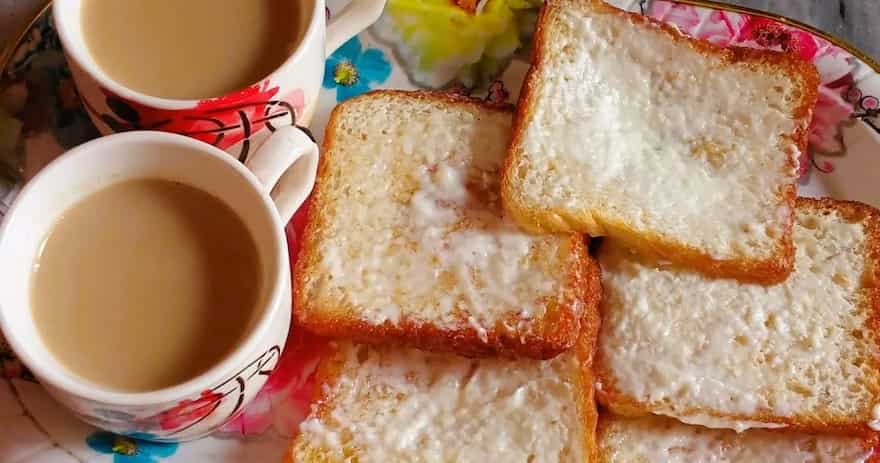 A typical Odia rice-based flat cake, this one share similarities with dosa. The only difference is it isn't crisp like dosa. Made from a fermented batter of rice and black gram and lightly roasted on a pan, these are a staple dish devoured as tea accompaniment. And dunking a chakuli in a cup of tea, is a common scene in almost every Odia household.

Tea And Cha: Ancient Trade Routes Gave These Names To Our Favourite Beverage

Little Joys: The Art Of Dunking Biscuits Into Tea