Telebhaja And Netaji: How A Century-Old Fritter Shop In Kolkata Has Links To Indian Freedom Struggle

When Khedu Shaw opened shop in 1918, he wouldn't have imagined his establishment would one day turn into the seat of India's freedom struggle Bengalis are infamous for their adda sessions that would drag on for hours. And there's only a few things Bengalis need while they're knee-deep in a conversation, chaa and telebhaja. While most Bengalis don't make most of their incessant ramblings, the "patriot of patriots" Netaji Subhash Chandra Bose was not one of them. And his favourite shop to have a bite and a sip while he was busy scheming our motherland's independence with his comrades, was Lakshmi Narayan Shaw and Sons.

Legend has it that after getting expelled from Presidency University for assaulting Professor Oaten for his racist remarks, he joined the Scottish Church College, and soon after he discovered this fritter shop on the same lane. Like every Bengali he had a knack for telebhaja or fritters and would frequent Khedu Shaw's shop after college hours. Soon Khedu Shaw would become his close confidante and would supply evening snacks and tea to Netaji and his band of intellectuals and revolutionaries who would hold meetings across the street from his shop. 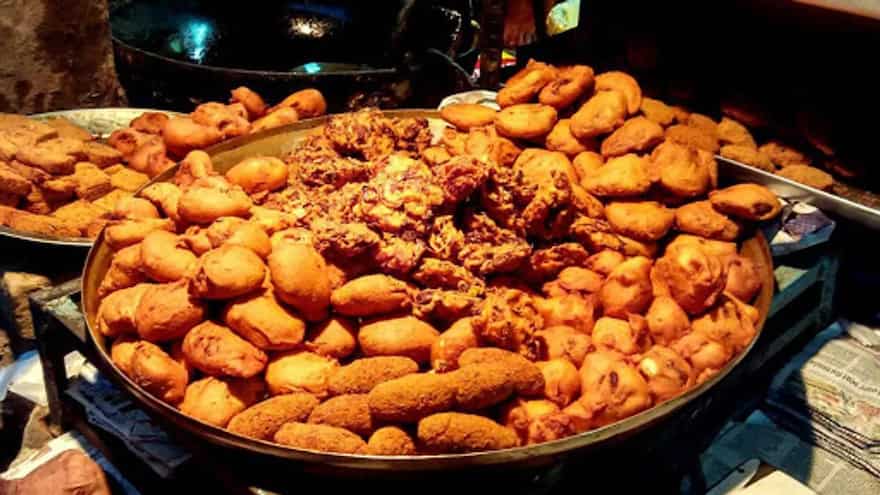 At the height of the freedom struggle, Khedu Shaw would himself carry a kettle of hot tea and telebhaja and muri to secret locations where freedom fighters held meetings. His shop would become the undercover hub where information and sensitive documents would change hands, right under the nose of the British government. On 16 January, 1941 Netaji would flee the country and launch the liberation movement of India. The following year, ever the ardent follower, Khedu Shaw would distribute free telebhaja in the entire neigbourhood on Bose’s birthday on 23rd January. Five years later, when the entire country was freed from the shackles of colonial rule, Khedu announced that his shop would celebrate Netaji’s birthday every year by distributing fritters free of cost to everyone.

Present day, Lakshmi Narayan Shaw and Sons is known to locals and people of Bengal alike, as Netaji'r telebhaja'r dokan, which translates to Netaji's Fritter Shop. Maybe the artwork of Netaji Subhash Chandra Bose on the signboard of this century old establishment on 158, Bidhan Sarani in Sovabazar might give it away to those that are unbeknownst to its larger context. The tradition that was started by Khedu Shaw is still practiced to this day, by the shop's third generation beholders from morning till evening for everyone. The price of these fritters is still very nominal, ranging from 4 to 10 rupees per telebhaja. Every evening, a throng of customers would be lining up to have their fill of piping hot telebhaja straight out of the oil along with muri and tea served in an earthen clay pot.

Bengal has always been the land of revolutionaries, intellectuals and freedom fighters and this humble shop is the reminder of how unremarkable their beginnings were compared to the heights they would go on to achieve and obstacles they would readily encounter and overcome. This shop is a proud heritage of the city, nay, the entire country, where its bravest and boldest children would strategize the motherland’s independence surrounded by insurmountable forces. Under the garb of fast food, this shop is a reminder of the days our heroes spent in constant agony, anxiety and fear but fuelled by humble telebhaja-muri-chaa and their undeterred resolve to one day achieve the impossible, they would soon be immortalized and remembered for the sacrifices they made in doing so. Khedu Shaw was as much a patriot as the innumerable others whose names would be lost in time, but their deeds have enabled countless others to reach that common objective, for the love of this beautiful country they all held so dear in their hearts- Independence or Death!