How fish cooked in tandoor became a delicacy in Yemen It's lunchtime in Djibouti's capital and the restaurant Chez Hamdani is buzzing. Local celebrities, visiting diaspora and nomadic herders: everyone flocks to this decades-old establishment for a taste of Yemeni fish, the only dish on the menu.

Split in two, coated with a red pepper paste and then baked in a traditional oven: its spicy flavour evokes the complex, multicultural history of this tiny coastal nation nestled between Africa and Arabia.

"It's a recipe imported from Yemen that we have adopted and which is part of our eating habits," explains Abubakar Moussa, a former television anchor, as he waits for his order to be prepared.

"All Djiboutians, whether they are young or old, consume it," adds the 63-year-old, a regular at the establishment.

The heavy Djibouti heat -- which the ceiling fans vainly try to dispel -- does little to dampen the enthusiasm of Moussa or his visiting Belgian grandchildren.

"Every time I come to Djibouti, he takes me here and I'm so happy," says Sohane, 16, who discovered the dish with her grandfather.

"When we make it at home in Brussels, it doesn't taste the same, but it reminds me of Djibouti, it's a little memory."

'The chilli is most important'

Several times a day, fishermen deliver sea bream, mullet and other offerings to the many Yemeni fish restaurants or moukbasa dotting the port city, which is separated from Yemen by the Gulf of Aden.

Then, it's time for the chefs to get to work.

The fish is cut lengthwise and salted, before a paste made from mild red peppers -- imported from Ethiopia -- is applied using a paintbrush. 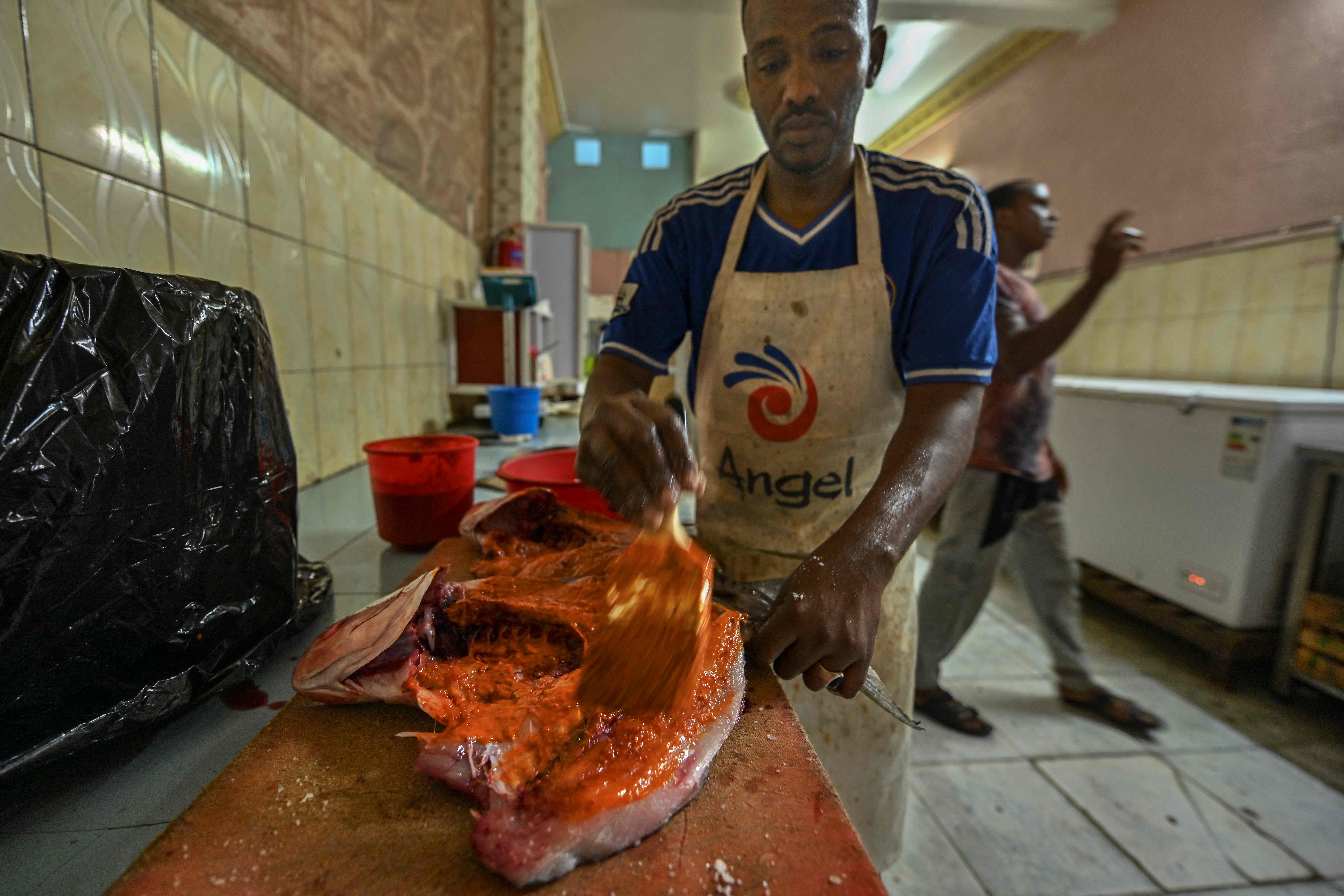 A cook bastes split fish with seasoning before searing it in a traditional open-flame clay oven to make grilled Yemenite fish. (Photo by TONY KARUMBA / AFP)

"The most important thing is the chilli," says one of the cooks, beaded with sweat, as he secures the fish to a long metal rod, before plunging it into a traditional terracotta oven, which resembles an Indian tandoor.

The finished dish -- retrieved 15 minutes later -- owes both its gentle heat and its intense red colour to the peppers.

Across Djibouti City, Yemeni fish is eaten with pancakes and "fata," a paste made from bananas or dates, and usually sold for around 1,000 Djiboutian francs (five euros or $5.60).

Restaurateur Omar Hamdani credits his grandfather's "world-famous" recipe for his establishment's enduring popularity, nearly a century after he emigrated to Djibouti from Yemen.

Not much has changed at "Chez Hamdani" since then, but for the addition of a second floor.

Its walls are still adorned with earthenware and traditional moldings. A small dining room in the back is reserved for women who wish to dine alone. And the recipe remains the same.

"My grandfather brought it back from Yemen, he opened this restaurant, then my father took over from him, and now it's my turn to take the lead," says the bearded entrepreneur, who is in his late 30s. 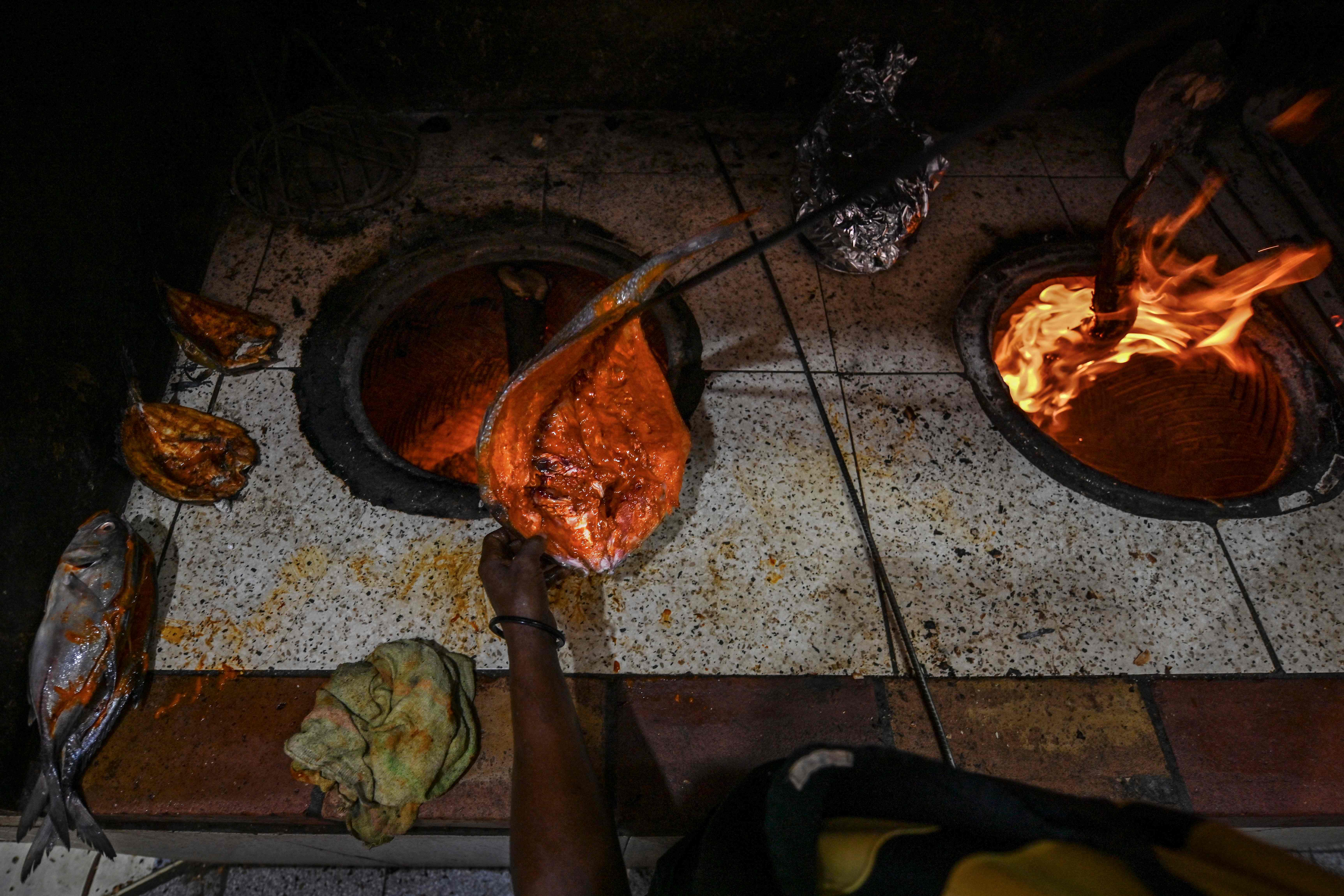 The Yemenis are the third largest ethnic community in Djibouti, behind the Issa and the Afar.

Migration and trade between the two countries have existed for millennia.

But in recent years, their shared history has taken a tragic turn, with thousands of Yemenis crossing the Bab el-Mandeb strait to seek refuge in Djibouti and escape the war that has ravaged their country since 2014.

After fleeing Sanaa for Djibouti, former civil servant Amin Maqtal set up a moukbasa called "Le Kaaboul" with two other immigrants -- a reflection of their desire for a fresh start and their longing for a taste of home.

"As long as I am in this restaurant, I eat here, I am surrounded by my compatriots, I feel good. Because everything I had in Yemen, I have it here," says the soft-spoken 45-year-old.

He is both moved and amused by the local craze for Yemeni fish, which is only one among dozens of delicacies in his home country.

In the end, "demand is stronger in Djibouti than in Yemen," he says with a smile.