Indulge in the goodness of Rajasthani cuisine by trying this Rajasthani thali.

Rajasthani cuisine hails from the rugged area of Rajasthan. It is also well-known for its snacks, including Pyaaj kachori, Mirchi bada, and Bikaneri bhujia. Other well-known delicacies are Dal Baati, Lashun ki Chutney (hot garlic paste), Malaidar Special Lassi, Alwar Ka Mawa, Malpauas from Pushkar, Rasgulla from Bikaner, "paniya" and "gheriya" from Mewar, and Mawa lassi from Jodhpur. The idea of Marwari Bhojnalaya, or vegetarian restaurants, which serve Marwari cuisine, originated in the Marwar district of the state and is now widespread throughout India. The Rajputs mostly chose a non-vegetarian diet, whilst the Brahmin, Jains, and other groups preferred a vegetarian diet. This shows how history also has an impact on eating. As a result, both kinds of delicacies are abundant throughout the state. A typical Rajasthani thali showcases a masterful performance of gastronomic dishes on a plate of gigantic proportions. Everyone would be delighted by the carefully arranged curries, pickles, speciality bread, and desserts.

Here's what a Rajasthani Thali is made of-

Dal baati is a combination of baati (hard wheat rolls) and daal (lentils). Tuvaar dal, chana daal (made by removing the skin from split chickpeas), mung dal, moth dal, or urad dal are all used to make daal. Aata, or hard bread is also known as baati, is produced from wheat flour. Choorma is a sweet treat made with semolina, bajra (millet) flour, or coarsely ground wheat flour.

Gatte ki sabzi, a delectable curry made using gramme flour as a basic ingredient, is an original dish from Rajasthani cuisine. The term "gatte" refers to cooked gram flour dumplings that are used to prepare this mouthwatering meal. For dinner, it tastes best when paired with roti or another delectable Indian flatbread, dal, and plain rice.

A combination of whole wheat flour, gramme flour, and spices are used to make the savoury and nutty-flavoured flatbreads known as Missi Roti. A gluten-free flatbread made with millet or bajra flour is called a bajra roti or bajra bhakri. Vegan and low in fat. They are really simple to make and go well with lentils or any curry dish made with Indian vegetables.

Moong dal, chana dal, toor dal, masoor dal, and urad dal are just a few of the protein-rich lentils and dals that are combined to make panchmel dal, also known as panchratan dal. This recipe yields a healthful, thick-textured dal with well-balanced spice flavours that goes well with baati and churma. Make your regular dinner into a healthy meal by serving it with chapati or another form of Indian flatbread, curries, and steamed rice.

A speciality from Rajasthan, Ker Sangri is made with dried Ker Berries and Sangri Beans. When items are cooked in oil and spices, they acquire an earthy, rustic flavour that is simultaneously acidic, sour, and spicy. Ker sangri is enjoyed not only for its distinct flavour but also for its purported health advantages, including the ability to treat cough and colds, diarrhoea, and weakened immune systems. 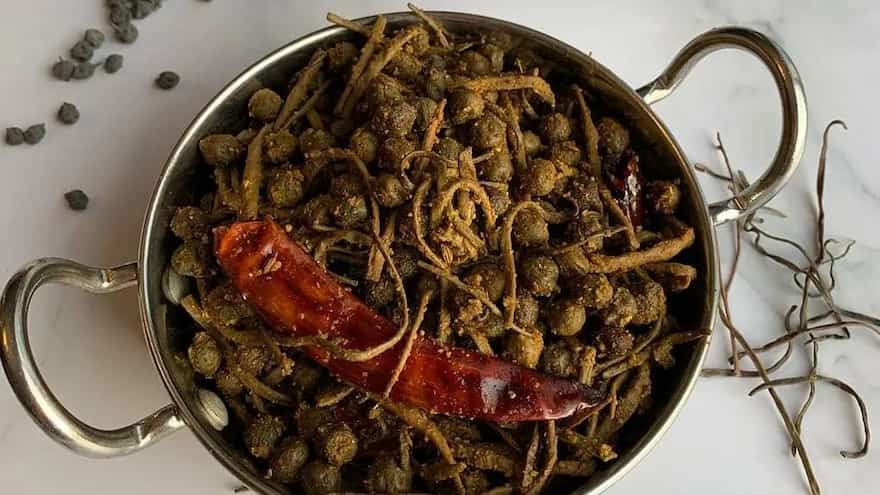 The Indian subcontinent is home to the popular drink chaas, which is made of curd. Using a hand-held device called a madhani, yoghurt (curds/dahi) and cold water are combined in a pot to make chaas. This can be consumed unseasoned or with various spices. Fresh yoghurt can be used to make chaas, and this type of chaas naturally has a pleasantly sweet flavour.

5 Vegetarian Dishes To Add A Rajasthani Twist To Your Lunch

Panchmel Dal: A Dose Of Protein With Rajasthani Tadka