Chartreuse is a French herbal liqueur with the only natural green colour in the world. Chartreuse is a French herbal liqueur with the only natural green colour in the world. Since 1737, French monks have been making it using a secret recipe containing 130 different plants and herbs. The name is derived from the Grande Chartreuse monastery near Grenoble, France.

Chartreuse is a one-of-a-kind liqueur that is difficult to replicate. Thus, it is no surprise that Chartreuse is an expensive liquor. A 750 ml bottle costs approximately $60.

St. Bruno of Cologne founded the Carthusians, an order of silent monks, in 1084 AD. They lived near Voiron in a valley of the Chartreuse Mountains, a region of the French Alps. By 1605, the Carthusians had grown to be a large bunch and it was then King Henri IV's Marshal of Artillery presented them with an ancient alchemical manuscript. It contained a recipe for a life-extension elixir.

Even monks were left baffled after reading the document. The concoction required 130 different plants. Advanced distillation, infusion, and maceration techniques were required. No one could even decipher the recipe until 1737 when the monastery's herbalist created a liqueur based on the ancient text. Even so, it is believed that he took creative liberties while making it.

By mule, a lone monk delivered the first bottles of potent herbal tonic (69 per cent alcohol) to surrounding villages. But it didn't stop there: in 1764, the Carthusians adapted the recipe into Green Chartreuse, a milder liqueur. The updated version, which was still potent at 55% alcohol, is what people drink today. It's been described as a herbaceous, sinus-clearing beverage with an "almost mentholated immediate heat" by some drinkers. The monks recommend serving it cold. 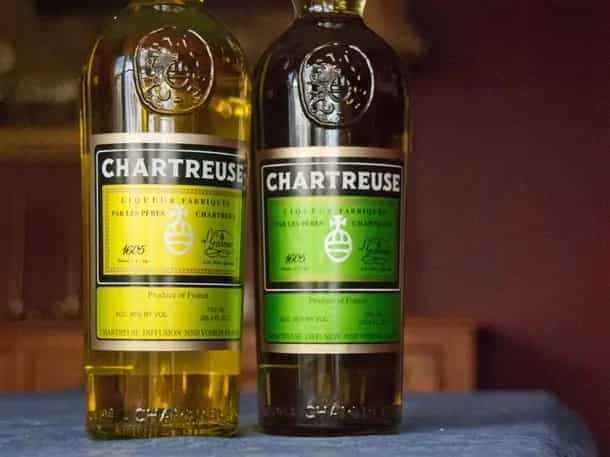 While Chartreuse can be consumed as a shot or as an aperitif, it is most commonly used in cocktails.

The Last Word cocktail is a classic gin cocktail made with gin, Maraschino liqueur, Chartreuse liqueur, and lime juice in equal parts. Its unique flavour is due to the equal parts format and speciality liqueurs. The drink first appeared on menus in 1916, but it wasn't published in a cocktail book until the 1950s. Then it faded into obscurity until a Seattle bartender (Murray Stenson) resurrected it in 2004. It became popular in the Pacific Northwest, then spread throughout the world, and has remained so ever since.

The drink is on the International Bartender Association's official cocktail list, which means it has an official definition.

The Bijou cocktail is a traditional drink made with gin, sweet vermouth, and chartreuse. Harry Johnson, the father of modern bartending, invented the drink in the 1890s. He named it after the colours of jewels that the liquors represented: clear gin for diamond, red for vermouth, and green for chartreuse (bijoux means jewels in French).

An iconic modern drink is the Naked and Famous. This drink has a perfect balance of smoky, citrus, bitter, and sweet flavours. It is a concoction of mezcal, Chartreuse, Aperol, and lime juice. It was invented by bartender Joaquin Simó while working at the New York City bar Death and Co. This cocktail is a great recent addition and it was created just 11 years back in 2011.

Despite rising demand, the order has maintained its tradition of entrusting the entire process to just two monks. Only Dom Benoît and Brother Jean-Jacques are familiar with all of the ingredients and how to transform them into the well-known, moss-coloured liqueur. Once a batch is ready, it is aged in massive oak casks inside the world's longest liqueur cellar. Several years later, the same men evaluate the product and determine whether it is ready for bottling. All subsequent stages of production are handled by other parties, so their work ends there. The liqueur is now sold all over the world, with funds benefiting the monastery. Purchasing alcohol lauded for its longevity and noble cause? It would be a sin not to drink to that.

Four Strong Liquors That Should Never Make It To Your Glass