Guess Who Made Kartik Aaryan Wait Before He Could Gorge On Delish Dilli Ka Khaana? Kartik Aaryan is on a promotional spree for his upcoming film ‘Bhool Bhulaiyya 2. The sequel of the superhit 2007 comedy that originally starred Akshay Kumar and Vidya Balan in the lead is all set to hit the theatres this Friday. Kartik is promoting the film across India, along with his co-star Kiara Advani. This is the first time Kartik and Kiara would be paired opposite each other and fans are already excited about the duo. Incidentally, both Kartik and Kiara identify as foodies. Something that is pretty evident from the Instagram stories that they have been posting lately. They polished off a Gujarati Thali, while on their tour in Ahmedabad. Both Kartik and Kiara were seen relishing the Aamras with full fervour. In Delhi, their spread took a slight Mughlai makeover.

Kartik Aaryan, posted an Instagram story where he gave us a glimpse of all that was there on the menu for them. From Mutton Korma to jeera rice, dal tadka, dahi bhalle and raita, the spread was filled with food that makes almost every Delhhite’s heart skip a beat, but Kartik had to wait. Rather, someone decided to make him wait. Kiara Advani, in one of her older stories from the same day, mentioned how Kartik made her wait for one of the events in the capital. By the time of dinner, the tables had turned. This time, it was Kartik who posted the story with the caption, “Waiting for @kiaraaliaadvani Kiara-1, Kartik-1". Well, revenge is best served cold, but the same cannot be said about that yummy-looking mutton. We just hope Kiara didn’t take too long to arrive. 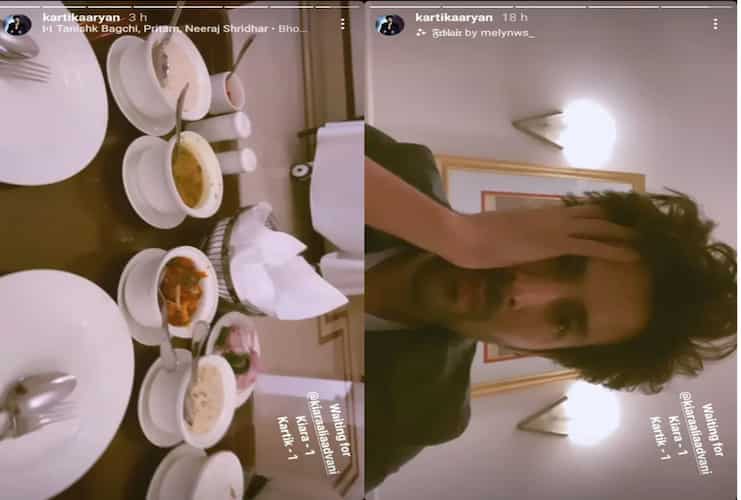 Delhi is renowned for its rich delicacies. The wide and versatile cuisine of Delhi has been influenced by its past rulers, colonisers and communities who found home in the bustling city. Here are 5 Delhi dishes to make you drool.

The lanes of Chandni Chowk in winter are filled with a rather peculiar-looking snack. Daulat ki chaat is a creamy and cloudy snack made with foam collected on milk overnight. It is served with some chunky nuts like pistachios and semolina crumble.

Delhi’s Daryaganj is the birthplace of the now world-renowned Butter Chicken, the tangy, rich chicken curry made with tomatoes and butter. But few know that Delhi is also the birthplace of another butter chicken, where chicken is roasted in spit. And then the charred chicken is tossed in a pool of melted butter and cream. Aslam’s butter chicken is exactly what it claims to be ‘butter’ and ‘chicken’, with of course, oodles and oodles of indulgence.

This legendary Kulfiwala in Old Delhi’s Chandni Chowk is renowned for setting Kulfis inside the fruit. For instance, if you fancy Mango Kulfi. Mango would be scooped out, and blended with milk, sugar and flavouring. This Kulfi would then be set inside mango peels that were left behind. So when you look at the Kulfi from outside, it may appear like a regular mango, it is only when you cut it, do you find the most delicious Kulfi inside.

Melt-in-your-mouth Galouti Kebab may be an Awadhi dish, but the Dilliwalahs swear by it too. Our deep inclination towards Mughlai food could be a reason. Rajinder Da Dhaba is an eatery in Safdarjung known best for its North Indian and Mughlai fare, but its Gulati Kebabs paired with Rumali roti, chutney and sliced onions are truly out of this world.

Located on Baba Kharak Singh Rd, near CP. The temple premises of this old temple is always bustling with small merchants, mehendi artists and a certain food vendor who is known to sell one of the capital’s best Kachoris. Kachori is a deep-fried, round pastry filled with spicy lentil mixture, This Kachori is served with a fiery potato curry and topped with chopped onions. Drooling much?