Guess What Is Karishma Kapoor Having For Breakfast; 3 Recipes Inside

Karishma Kapoor was seen relishing a special toast for breakfast with a view and we liked it. Mornings are meant for re-energising yourself and getting your act together. It is like fresh and new beginnings taking shape. To kickstart your day and your imagination, what could be a better idea than a delicious breakfast? Breakfast of champions, like they say is what you need to have to be able to conquer the new day and make a mark. If you have a yummy breakfast plate on the table and a beautiful view along with that, we doubt anything can stop you from making your mornings brighter. This breakfast picture of Karishma Kapoor just livened up our Sunday.

Recently, Karishma Kapoor took to her Instagram to share a story of her breakfast. Do you know what it is? It is French toast. The actor put up an image of a plate of two circular French toasts on a plate along with giving us a sneak-peek into the view. The blue skies complement the breakfast plate really well. Well, we can’t wait for you to look at it so here it goes. 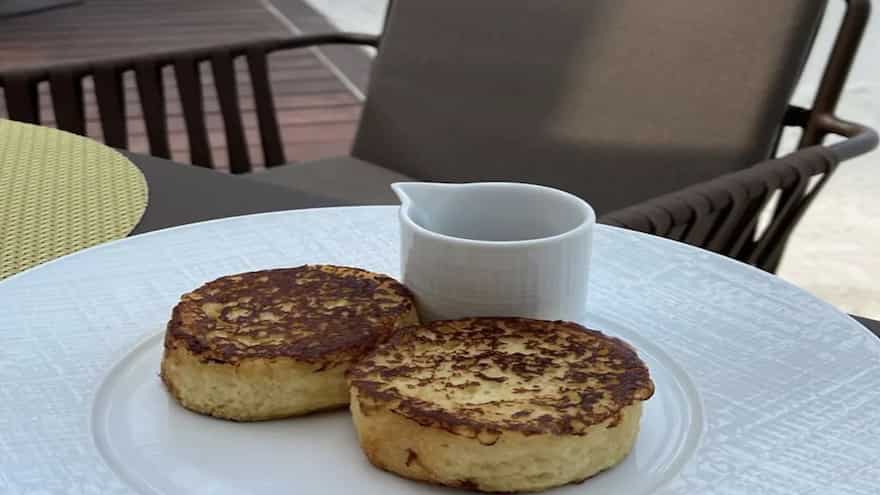 Along with that, she even put up a poll, asking her followers about the French toast with a yes or no option. Well, if you ask us, it is definitely going to be a yes. But before that, do you know about the history of French toast? This toast, which boasts of being French, is actually so. This dish originated in the courts of the Roman empire, back in 5th century A.D. when milk and butter were mixed together and bread was dipped in it to be fried and served a warm dessert.

The French took up the idea and transformed it into Pain perdu, as it is called in their native language. The concept behind this dish was to repurpose the old and stale bread which had become hard and was difficult to eat otherwise. In order to avoid wastage, a concoction of milk, butter and eggs was prepared and the bread was coated with this and fried. This fried toast came to be known as French toast as it spread elsewhere from here.

Now that you know so much about French toast, how about you make one too? Here are three recipes that you can try at home.

Made with the sweetness and goodness of banana, this toast is crunchy and fruity.

A poached egg is sandwiched between two French toasts and savoured.

Dunk the French toast mixture in muffin moulds and bake it until crisp.

Kiara Advani Is Having A Strawberry-Loaded Breakfast; 4 Fruity Recipes Inside