Textile revivalist and designer Gaurang Shah, after wowing Bollywood stars with his hand-crafted saris, has food design on his mind now, with the launch of Gaurang’s Kitchen in Hyderabad Designer Gaurang Shah’s forefathers might hail from Patri, a small village in the arid district of Kutch, Gujarat but for all practical purposes, he considers himself a Hyderabadi at heart, having lived here all his life, and a global Indian, by his tastebuds! After having dazzled the ramp in India and overseas, with his trademark kalamkari, Patola and Kanjivaram saris, the designer is now on a mission to explore his food-design journey. And being a true-blue Hyderabadi, what better place to launch his dreams than Hyderabad?

Gaurang’s Kitchen, his sprawling 300-seater restaurant which opened in a quiet lane of plush Jubilee Hills this summer, is an ode to his other creative muse, namely food. Spread over 7,000 sq ft the restaurant has an al fresco sit out, and indoor seating over two floors, and is housed in an erstwhile bungalow.

The gates of the restaurant lead to a sprawling Indigo Verandah, named after the indigo swatches swaying in the breeze, which is the al fresco, outdoor seating. It has both regular tables, as well as low floor seating, baithak style on gaddas, and has a very pleasant ambience, thanks to the lush green foliage around. There is a Tree of Life drawn by his textile designer on the walls, with a cheetah perched royally on a tree branch. Indoors, the predominant shade is madder, contrasting with the pristine-white kota chikankari curtains, the antique Paithanis and Kanjivarams framed on the walls, down to the vegetable-dyed upholstery. The resulting visually pleasant ambience, bears testimony to Gaurang’s intrinsic design aesthetics. “I worked on the concept, right from the menu to sourcing utensils and the right crockery, the right upholstery for the furniture, for about six months after getting the lease to this property last October. Our chef Prakash Lobo is sourced from Mumbai and is a specialist at Indian ethnic food. We are a work in progress, as our food is researched and experimented upon daily,” shares the designer who is quite upbeat about the feedback he has received so far. 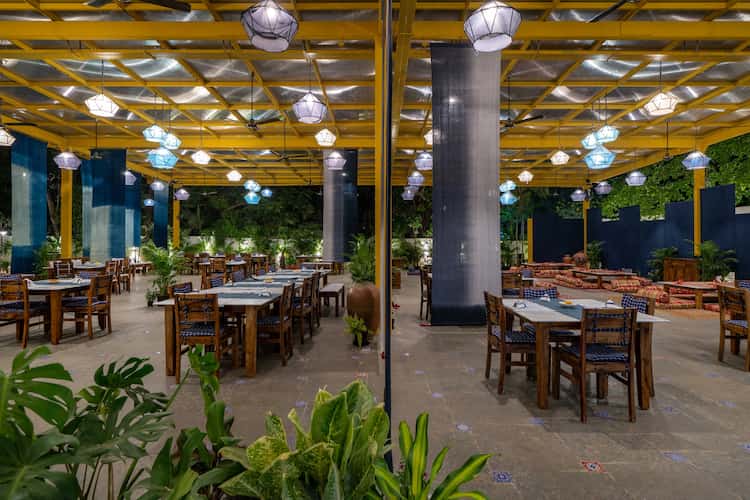 How did he get interested in the food space, I ask. “Frankly, I have been toying with the idea of opening my own signature vegetarian restaurant for the last 12 years but somehow had not been able to clue in on an ideal space, which would carry my design aesthetics, and be a place where families would spend hours, feeling relaxed and at home. I was very sure that my restaurant would be serving diners all the food that I am fond of, and which I have sampled across my journeys. However, with all the travel which my shows entail, I just could not find enough time to pause and plan my F&B space. The pandemic of course, gave me the time and space to think up the project. As providence would have it, I landed with this space in October 2021, “shares the chubby designer, who has always been known among his close circles of friends, family and colleagues as a keen foodie.

Who are the people who have inspired him on this food journey I venture to ask. “My mother who is a wonderful cook, was my first-ever introduction to the world of perfect culinary skills. Even though she cooks homely Gujarati food, daal-shaak, kadhi, roti-chaawal etc, whatever she brings out of her kitchen is hot, fresh and super tasty!,” answers the designer. He recounts how he always makes it a point to stop by at the chaat and bhel vendors in the Kalba Devi textiles market in Mumbai, while scouting for fabrics as a designer. “There is no comparison to the flavour profile which street foods in India bring to our palates, they have perfected the masala factor, and their client turnout is phenomenal, “asserts Gaurang. 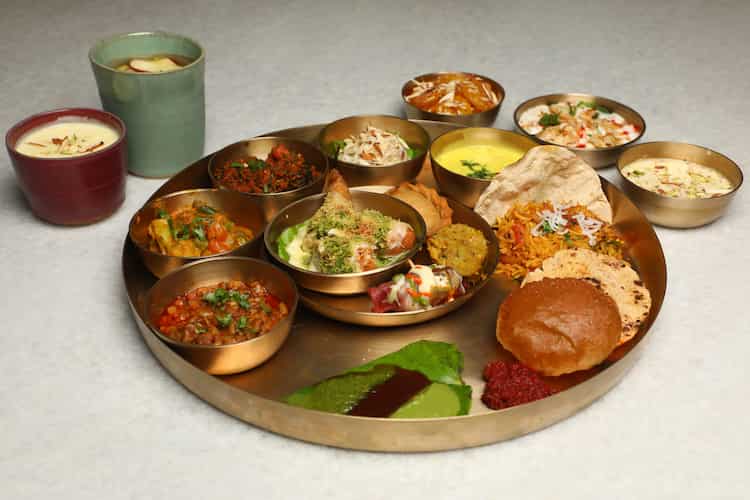 Laughing heartily on being asked if he indulges in cooking, he says,” I know how to make a few of my favourite foods, like dal dhokla or mixing up a bhel puri at home. In fact, I love to experiment with different kinds of bhel, not just murmura, but sabudana bhel, which is my own innovation and which we have added to our menu. The other day I even rustled up a murukku bhel, which my staffers loved! So cooking for my restaurant is certainly part of my retirement plans,” he guffaws.

Interestingly, the thalis at Gaurang’s Kitchen present a mini-India on one’s palate, with not just a taste of the typical Gujarat-Rajasthan thali, as one would conjecture, ging by his Gujarati roots. For example, on the day I visited, the thali had for starters, Sabudana Bhel (the designer’s innovation), Kothimbir Wadi (Maharashtrian), Aaku or Ribbon Pakodi (a common south Indian snack) and Paneer Pahadi Tikka (North Indian). For mains, there was Rajwadi Rajma (north Indian), Chettinad Paneer Kari, (Tamilian special), Parwal Tamatar (made in a simple Gujarati Jain no-onion, no-garlic way but delicious, nevertheless!) and a mixed veg curry, of a North Indian connotation.

The breads basket bore the uniqueness of India again, there was the Maharashtrian Puran Poli (wafer thin and with generous filling of the chana dal-jaggery mix), biscuit bhakris (commonly seen in Gujarat, Rajasthan and the rest), north Indian phulkas and tawa paratha and I got lucky with some Baati which I paired with the daal tadka on the thali and the Churma which was also part of the desserts platter.

There was also Gujarati Kadhi (with a sweet, creamy aftertaste) to be paired with Fada (broken wheat) Khichdi and Rice. In desserts, there was Kulfi with Rabdi (delicious to the last drop), Lemon Barfi and the Dry fruit Choora or Choorma.

“Just like I don’t differentiate between my weaves, I don’t discriminate between regions when it comes to food, for isn’t food universal?” he questions. Also, no two thalis are ever the same, so there is always improvisation around the clock to serve something new. He mentions an instance of how his junior sous chefs turned out some Tandoor Aloo, made in an Afghan style and spices. It turned out delicious, so that was also added to the menu. 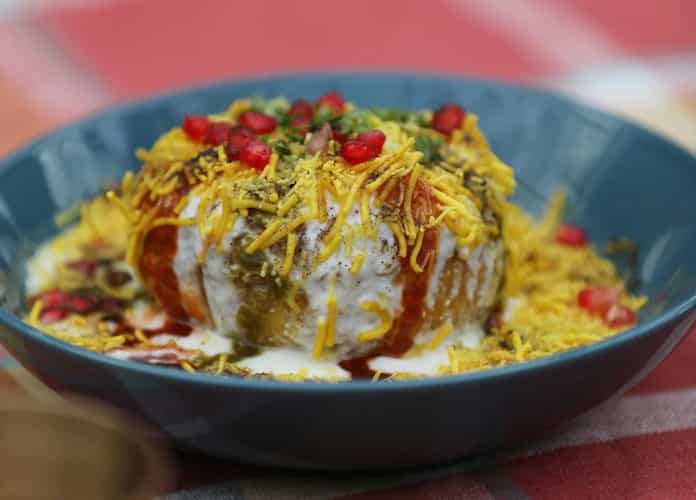 He is happy to find a good number of Telugu families frequenting the restaurant and not just Gujarati and Marwari patrons from his circle, as he considers himself a local Hyderabadi by heart. Being a Hyderabadi, how could biryani be far behind?  So, he designed a Gujarati biryani recipe, basmati rice spiked with, besides the spices, some dhokla, fafda, patra and muthiya, howzzatt for innovation?

Since the creator has a sweet tooth, desserts are a focus area at Gaurang’s and there is a desserts counter, selling ghewar, rasgullas and fruit kulfis. The latter has become quite the trending thing to order and consists of fresh fruits scooped out and filled with kesar kulfi.

“Our eastern India part of the menu is still lacking and we intend to address the gap soon, especially by adding its wonderful desserts repertoire, I am currently looking for a mishti karigar to make rasgullas, cham cham and all of that. I remember having this sweet they make out of parwal in Kolkata. It is these kind of sweets which we want to recreate here,” says Gaurang.

Did he feel jittery before opening the restaurant? I would be lying if I said I didn’t, answers the designer. It is not an easy job to be in the F&B space, and my greatest challenge in running a restaurant now is managing staffers and retaining them. This is a service industry and we can’t afford to take it easy with service, “ signs off Gaurav.

I learn that he and his team are soon planning a pan Asian food promotion soon, to be served perhaps on the same Kaansa crockery he uses for serving his Gujarati-Rajasthani-Maharashtrian-Punjabi-Andhra-Telangana thali.

No frills here, the man means business and is here to stay!