From Mirchi To Pineapple: 8 Unusual Types Of Halwa

While aata, sooji and gajar are popular halwa varieties, there are some other types of halwa that are more unusual. A serving of piping hot halwa has the potential to soothe, comfort and alleviate the stress of the day. While aata, sooji and gajar are popular halwa varieties, there are some other types of halwa that are more unusual. Ingredients normally used to prepare savoury food—like chillies and eggs—are also used to make halwa. Fruits like mangoes and pineapples also make their way into some halwa recipes. If you’re intrigued, here are some unusual types of halwa you must try:

Popular in Rajasthan, mirchi ka halwa is made by cooking green chilli paste with khoya and semolina. The sweet and spicy treat is a testament to the fact that even opposing flavours can complement each other.

Made with cornflour, ghee, water and sugar, Karachi halwa originated in the city of Karachi in Pakistan. The chewy dessert is also decorative and is garnished with almonds, pistachios and other dried fruits. It is a go-to celebratory sweet, especially for festivals like Diwali. Aloo halwa is well-known in Uttar Pradesh and is an appropriate delicacy for a country like India that loves its potatoes. Eaten mainly during Navratri, it’s a tasty dish made with an ingredient that is otherwise used to prepare savoury food. Also called ande ka meetha, ande ka halwa is very popular in Pakistan. It is a rich sweet made with eggs, ghee, sugar and milk. It may be spiced with cardamom powder, which adds to its flavour. Ande ka halwa is often garnished with dried fruits and nuts.

Bread is probably one of the most versatile ingredients. If the West has bread and butter pudding, India has bread halwa. It is made by frying slices of bread in ghee and then cooking the fried bread with milk and sugar.

Regular sooji halwa can be jazzed up by adding pineapple to it. The pineapple used may be fresh or canned, as both work equally well. Pineapple halwa is especially popular as a dessert in South India and also uses saffron to give it colour. 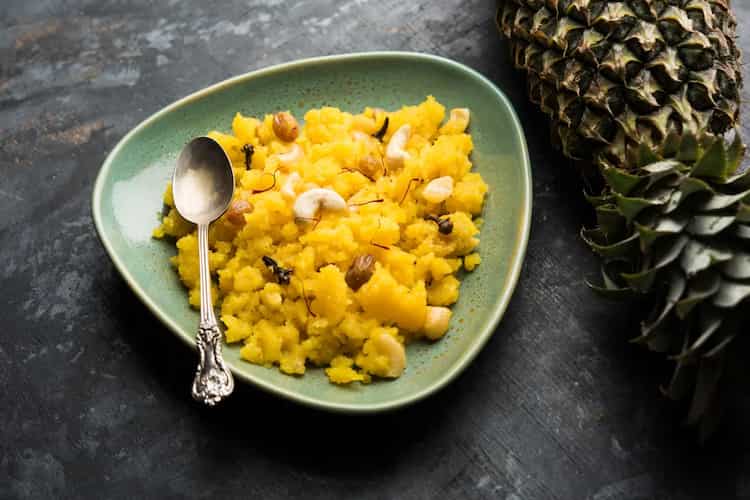 Eaten mainly during Navrati as it is vrat-friendly, singhade ke aate ka halwa is quick and easy to make, like most other halwas. Singhade ka aata is essentially water chestnut flour, which adds a pleasant flavour to the dish. This halwa is also very nutritious.

A favourite fruit with most people, mango can be used to add a fruity flavour to halwa. Particularly a hit with children for its taste and bright colour, mango halwa uses fresh mango puree along with other ingredients like cornflour and milk.