Whether it’s appam and stew or misal pav, Indian breakfast is usually a combination of a curry-like dish and some type of bread. Different regions in India have different ideas of what a filling breakfast is. While places in the North tend to favour fried food, those in the south steam a lot of their food. This makes breakfast across the country an affair that has a lot of variety. A lot of breakfast buffets are a nod to this, with regional Indian breakfast combinations being a part of them. Whether it’s appam and stew or misal pav, Indian breakfast is usually a combination of a curry-like dish and some type of bread. We list some popular breakfast combinations from around India:

Aloo and puri is a popular breakfast combination in North Indian cities like Delhi. Sometimes, bedmi is served in place of puri. Dough that has been rolled into circles is dropped in hot oil and puffs up to result in puris. The aloo that goes with the puris is a kind of spicy curry, which uses spices like cumin, fenugreek, coriander power and red chilli powder. It is an especially comforting breakfast on winter mornings. 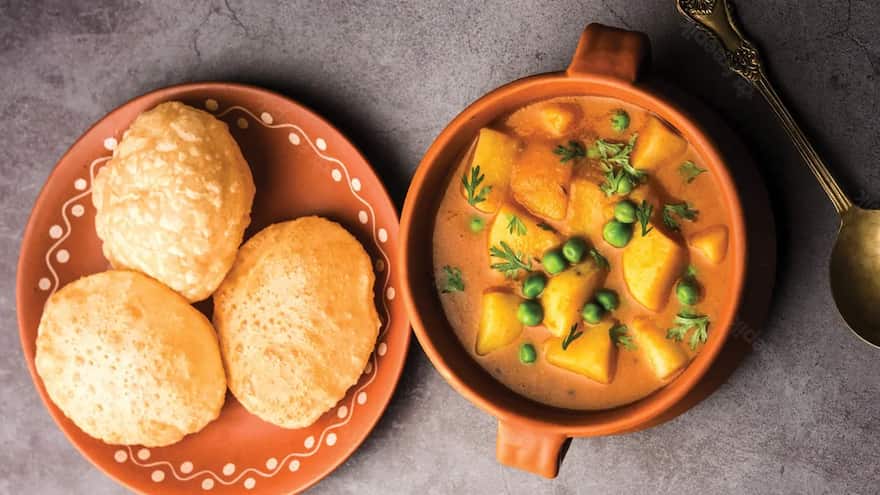 A fermented rice pancake, appam is soft and spongy and shaped like a bowl. Appams may be plain or made with egg, and pair well with stew, which is fondly also called ‘ishtew’. Traditionally, the batter for appams is fermented using toddy. Stew can be made with vegetables, chicken or mutton and uses coconut milk as its base. Appam and stew makes a filling and wholesome breakfast that is popular across Kerala. Medu vada is a well-known South Indian breakfast snack made with urad dal batter. It looks like a doughnut but is actually savoury and pairs well with hot sambar. With a crispy exterior and soft interior, medu vada is a tasty dish that was popularised outside of South India by Mumbai’s Udupi restaurants. Besides being a breakfast snack, medu vada may also be eaten as a starter with lunch or dinner. A breakfast staple in Maharashtrian cities like Mumbai, Pune, Nashik and Kolhapur, misal is a spicy preparation made with sprouted lentils. It is served topped with onions, farsan or sev, coriander and a wedge of lime. Fluffy pav, which has been lightly toasted with butter, accompanies misal. Misal can be quite spicy so many people have yogurt to go with it. Kachori-sabzi and jalebi is a classic breakfast combination found in Varanasi. Small shops in the narrow lanes of the city are known for selling the combination, which is tasty and filling. The ‘sabzi’ usually consists of aloo but may sometimes also include other ingredients. Kachori-sabzi and jalebi is an important part of Subah-e-Banaras, the religious celebration that is held in the morning.

In Tamil and Malayalam, puttu means ‘portioned’. Puttu are steamed cylinders made with ground rice. They are layered with grated coconut, and sometimes include a sweet or savory filling. Kadala curry is a spicy curry made with black chickpeas, coconut and spices. People in Kerala often enjoy steaming hot puttu and kadala curry for breakfast. It’s considered a nutritious breakfast combination.

Puttu And Egg Curry: Indulging In A Traditional Breakfast