Freddy Birdy’s Latest Post Made Us Dig Out Fascinating History Of Frankie, Mumbai’s Own Wrap

Mumbai is the birthplace of Fankie. Let not the ‘western-sounding’ name make you think otherwise. Mumbai’s vivid street food fare makes it a foodie’s dream come true. From local delicacies such as Vada Pav to momos and dosas, Mumbai’s streets never disappoint in terms of variety, making the city a truly cosmopolitan one. Frankie is one of Mumbai’s most beloved snack. It is essentially a roll or a wrap, made with chapati. The stuffing includes a variety of sautéed veggies and chutneys. This saucy, wholesome snack that is barely 50-60 years old is rather special to Mumbaikars and all those who have had it in Mumbai. Copywriter and social media influencer Freddy Birdie penned down a very sweet note in honour of the snack recently that was dipped in nostalgia. Calling “Tibb’s Frankie” his favourite, he started off by commenting on the “iconic name” of the dish. He wrote, “Not Rahul, not Harkesh or Deepak. Only a Frankie can be called a Frankie. It just wouldn’t taste the same with any other name”. And guess we agree completely, Bard=0, Frankie=1.

The legend behind the name is actually very fascinating. So, this is what apparently happened. Mumbai is the birthplace of Fankie. Let not the ‘western-sounding’ name make you think otherwise. A gentleman named Amarjit Singh Tibb, went to Beirut for a trip where he took quite a liking for the Lebanese Pita Roll. Somewhere around 1960, he thought of recreating the roll, but with an Indian twist. Pita, hummus et all were replaced by standard chapati, butter and veggies. A thin layer of egg helped bulk up the roll. The strategic location of Tibb’s restaurant, helped him serve this interesting grab and go snack to hungry commuters, travelers and loyal patrons. Amarjit Tibb happened to be a great cricket fan and an evern greater fan of the West Indian cricket icon Frank Worrell. It must be recalled that in that era, West Indies was a big name in the cricketing world, Tibb chose to call his Chapati roll ‘Frankie’ after Frank Worrell and the rest they say in history.

So what is a Frankie, Freddie explains it in his signature tongue-in-cheek style  style, “a crispy paratha quickly tossed in a light, frilly egg batter and then warmed to a crisp on a griddle.”

While Frankie can be both veg and non-veg, Freddie seems to be drawn towards the mutton variant, where the Frankie is topped with "mutton curryish topping”. A Veg Frankie provides only half the pleasure, argues Freddy. 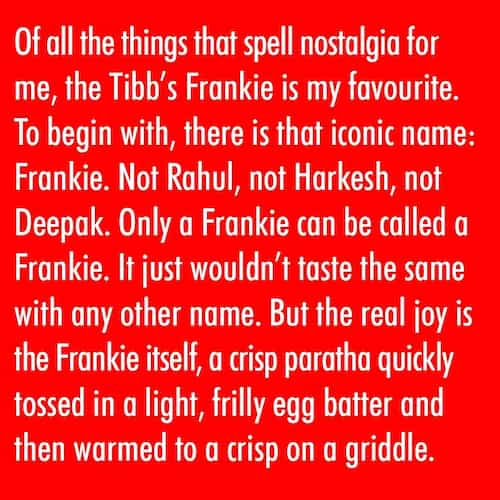 “This is then clothed stylishly, like Karan Johar off to yet another film wedding in a chic, red and black striped covering”, he writes about the wrapper in which these Frankies are sold. Further he goes on to explain the flavour and texture of this roll, “Crispy, soggy, dry, juicy, tasty, heavenly. It must, at first bite, be crisp. Then soft. On further interrogation it must reveal a beautifully spicy mutton curry interior”. Drooling much, so are we. Frankie is quite different from the roll of the east, the Kolkata Kathi roll, because of the saucy almost curry-like fillings. Here’s a recipe that you should try soon.