Feasting, Game of Thrones-Style: The History Of The Food Featured In The Fantasy Epic

Several of the specific dishes featured in Game of Thrones, from the pigeon pie at the Purple Wedding to the lampreys served by Cersei to Tyrion, have real-life medieval versions. A return to Westeros is imminent as HBO’s Game of Thrones prequel, House of the Dragon, premieres in India on Monday, August 22. While this chronicle of House Targaryen will introduce us to many-a-new character and plot, it will also reprise plenty of the old and familiar: King’s Landing, jousting knights, courtroom intrigues, dragons. And if we’re lucky, it will further replicate a rich and detailed aspect of author George RR Martin’s world: the royal feasts.

Descriptions of food abound in the Ice and Fire books, and although Game of Thrones couldn’t devote quite as much screen space and time to their depiction, the show does have some memorable sequences that foreground the act of eating.

Banquets of state, or even ‘casual’ meals, are juxtaposed with several critical moments in the narrative:

* The dinner hosted by Ned and Catelyn Stark for Robert Baratheon and Cersei when they make their royal visit to Winterfell.

* The infamous Red Wedding feast headed by Lord Walder Frey, which ends in the unforeseen slaughter of his guests.

* The Purple Wedding, marked by 77 courses, as befitting the joining of houses Lannister and Highgarden — the latter especially known for their bountiful harvests and fine wines such as the Arbor Red and Gold. Joffrey Baratheon hacking into a large pigeon pie, causing live doves to fly out. Minutes later, Joffrey choking on a piece of that same pie, and suffering an agonising death.

* Over in Essos, Daenerys being put off by the roasted horsemeat served at her wedding to Khal Drogo: flies buzzing around platters piled high with haunches, as the Dothraki drink, copulate and fight to mark the special occasion.

* In Dorne, snake is grilled and served with a sauce that incorporates a drop of its venom, along with the fiery peppers the Dornish are so fond of.

* Cersei “treating” Tyrion to a fine dinner that includes lamprey pie, before reminding her little brother just how much she despises him. 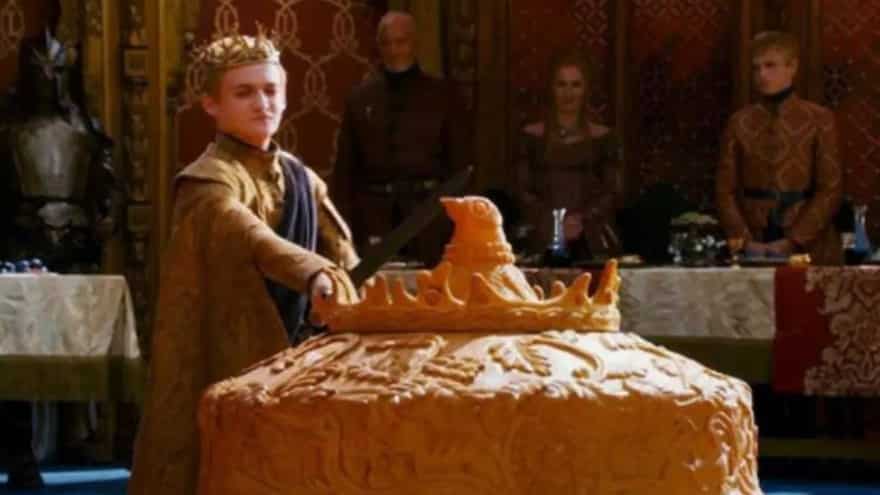 The infamous pigeon pie served at Joffrey Baratheon's wedding to Margaery Tyrell. Still from Game of Thrones, via HBO.

Many (if not all) of these feasts are grounded in the reality of medieval European banquets. Certain specific Ice and Fire dishes even make appearances in history. Joffrey’s wedding pie, for instance, has its echoes in the 16th century practice of placing live birds within a baked crust: chefs would carve out a hole at the bottom of the pie and push the birds inside. When the guest of honour would cut into the upper crust, the birds would be released.

As the tastes and lifestyles of the aristocracy had evolved and refined, so too had their amusements become increasingly elaborate. An offshoot was this sort of live entertainment at dinner — where the food served had to offer delights beyond its taste — known as ‘entremet’, or ‘subtlety’. (Joffrey’s wedding also features a whole roasted and stuffed peacock, which in the medieval era would have been categorised under entremet as a type of ‘illusion food’: the bird would be plucked and dressed before being cooked, then its feathers placed over it once again before being transported to the banquet hall.)

Medieval aristocrats had access to imported wines. To improve the shelf life of wine, it was often mulled with spices. Olenna Tyrell's house is known for the Arbor Gold and Arbor Red wines produced in their fief. Still from Game of Thrones, via HBO.

At Henry IV’s wedding with Marie de' Medici in 1600, songbirds were folded into their guests’ napkins. When they sat down to the royal meal, the birds flew out as the serviettes were unfolded. In the 17th century, the Duke of Buckingham’s banquet for Charles I and Queen Henrietta featured a pie with an actual human being contained within it: a celebrity dwarf known as Jeffrey Hudson. The first incident is believed to have inspired the children’s rhyme “Sing A Song of Sixpence”, but in Game of Thrones, we see the pie (and an iteration of the lyrics) making an even more sinister appearance: Arya bakes one for Walder Frey; the filling comprises two of his (murdered) sons. Sansa Stark is shown to love sweet treats like lemon cakes. Still from Game of Thrones, via HBO.

The lamprey pie that Tyrion is served by Cersei also has real-life historical allusions. Lampreys are a type of eel and were much prized by medieval royalty, especially when baked in a pie crust with spices and wine. Richard I is famously believed to have died after eating “a surfeit” of lampreys. The city of Gloucester had a tradition of sending a lamprey pie to the English monarch every year at Christmas from 1200 onwards; when they missed a year, King John imposed a fine as punishment.

But pies weren’t only reserved for the rich. Just as Arya’s friend Hot Pie bakes them at an inn for its wayfaring clientele, the poor in medieval times prepared meats into a variety of pies. Pies helped in keeping the meat edible for longer, in days of no refrigeration. Access to fresh meat was a sign of one’s wealth: on the days that the church allowed meat to be consumed, salted and boiled versions (of beef, mutton and pork, as well as fish) were likely to be served. The diets of the poor would end at this, but for the rich, a second course of more delicate meats would follow, including venison, poultry, fish etc. 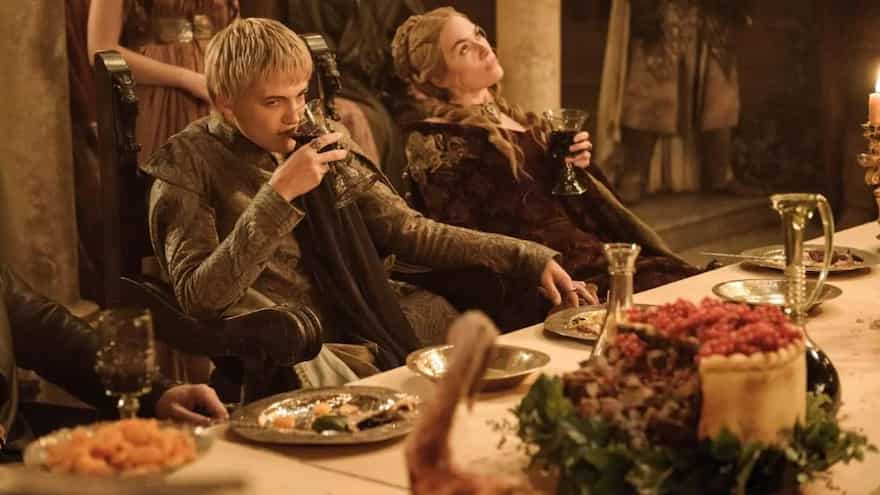 Yet another interminable feast, how dull. Still from Game of Thrones, via HBO.
For both poor and rich though, “pottage” was a staple at mealtimes: a thick soup or stew with meat (when allowed and available) and some vegetables, all served in a “trencher” — a hollowed out piece of hard bread. For the Lannisters, pottage may have taken the form of creamed leeks; for the men of the Night’s Watch, something hardier and warming; and for the poorest of the poor in King’s Landing, the very unappetising sounding “bowl of brown”: indeterminate sludge that had simmered in the pots of Flea Bottom’s shops for years, and to which you could add your own protein (a bird or a piece of meat, sometimes a rat) in exchange for a serving with a hunk of stale bread. Now that’s a Game of Thrones dish we’d be more than happy to never encounter again.

House of the Dragon airs on Disney+ Hotstar in India, every Monday at 6.30 am, starting from August 22