The Fiery Trail Of Green Chillies And Indian Dishes To Try

Try these Indian dishes that are made with green chillies. Chillies are believed to have originated in Mexico around 7000 B.C. Chillies have been cultivated and grown since 3500 BC. It was used to spice up Mexican cuisine. Christopher Columbus, who found America in 1493, introduced chilli to the rest of the world. Christopher left Spain to travel to India to bring spices such as pepper back to his homeland. He mistook not just America for India, but also chile for black pepper. The chilli was given the name 'chile pepper' because of this. He returned to Spain with chile pepper, which became a well-known spice. Another theory for the spread of chilli pepper is that the Portuguese imported the pepper from Spain and cultivated it in India.  The chilli pepper plays an important role in the cuisine of Goa, India, which was once a Portuguese territory. Chilli peppers made their way from India to Hungary via Central Asia and Turkey, where paprika became the national spice.

Although there isn't much information about how the chiles got from South Asia to China and Southeast Asia, local, Arab, and European traders likely transported them via ancient trade routes along the coasts and big waterways like the Ganges.

Chillies play an important role in Indian cuisine. The Indian gravies and curries are rich in flavours and spices that are derived from chillies. Some believe that chillies are only used to add flavour but cannot be consumed as it is. Well, that's incorrect. You can cook green chillies in different ways and fulfil your fiery cravings.

Here are the dishes that you can prepare with green chillies.

Paranthas are every north India's favourite breakfast. Sometimes, we do get bored of the usual namkeen parantha and crave something exotic. Mirchi parantha is the perfect solution to this. Finely chop some green chillies and use them as a stuffing for the parantha. Shallow fry the parantha well with some butter. Serve the hot fiery parantha with some plain curd and enjoy breakfast. 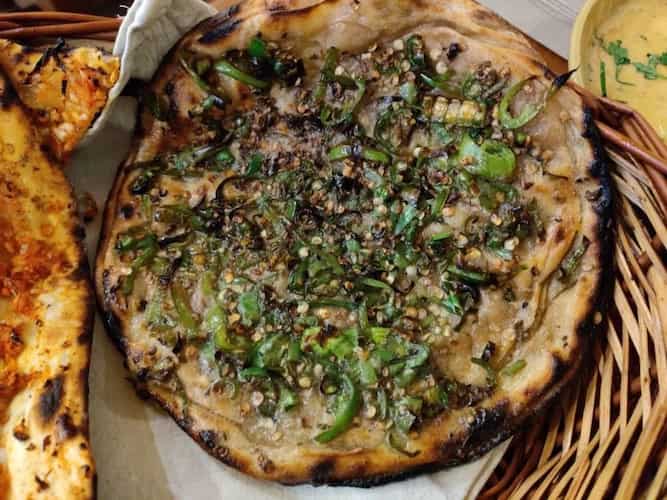 Thinking of rain, one cannot miss pakode. It is a popular snack in Indian households. Hot spicy pakodas with chai is a soothing combination. Mirchi pakoda is one such variant of pakodas that is spicy yet delicious. It is made by coating green chilli peppers with besan and deep-frying them. The fieriness of the chilli pepper is balanced by the fried besan coating. It is a perfect snack to be enjoyed with evening tea. Mirchi ki sabzi is a popular dish in Rajasthan. It is usually eaten with a bhakri or missi roti. All you have to do is cut the green chilli peppers into small dice. In a pan, add some oil and saute the chilli peppers well. Add the desired spices, besan and peanut powder. Cook till the rawness of the besan is gone. Add some water and simmer for a few minutes. Try this Rajasthani delicacy with Missi roti and enjoy the traditional homely dining experience.