In the mist-laden town of Kalimpong, West Bengal, a unique mountain cheese movement is fermenting. At the heart of it are two young farmers, Samuel Yonzon and Khushnarayan Sharma. One came across their stories recently in a video by Medium & Rare, a commercial food photography and knowledge-sharing platform started by photographer Assad Dadan.

The trajectories of Sharma and Yonzon are uncannily similar. Both left their jobs in the city—Yonzon as a sound engineer and Sharma as a 3D graphics designer—to get back to their roots. Around this time, in 2013, some other youth from the region had started quitting their jobs in the metros to come back to Kalimpong and Darjeeling. They started cafes, adventure biking ventures, and more. “Now they tease me as the captain of the quitters club,” laughs Yonzon, who came back to his ancestral village of Soreng, a picturesque mountain village located 25 kilometres from both Darjeeling and Kalimpong. He headed back after a decade of working in cities like Delhi, Chennai, Bengaluru, Kathmandu and Mumbai to be with his aged father, now 82. “My mother is no more. Although options in my line of work are better in the cities, I returned for good with my son and wife, who also quit her job as a lawyer,” he says.

Starting from the scratch, Yonzon set up his meat shop, thereafter turning to manual milk pasteurization. Hailing from a farming family, dairy was in his blood, having been brought up on milk, honey and local eggs. “It was my basic instinct. I started experimenting with manual pasteurization, having no money to invest in heavy machinery worth ₹50 lakhs to a crore,” he says.

The dairy enterprise started with two packets of milk from the cows present in his ancestral farm in Soreng. However, Yonzon and his family had to make another shift, this time to the main town of Kalimpong for his son’s education. “At that point, quality dairy stuff wasn’t available in the town. There were products with great packaging but low quality,” says Yonzon. “That just spurred us to grow faster to offer a better experience.” 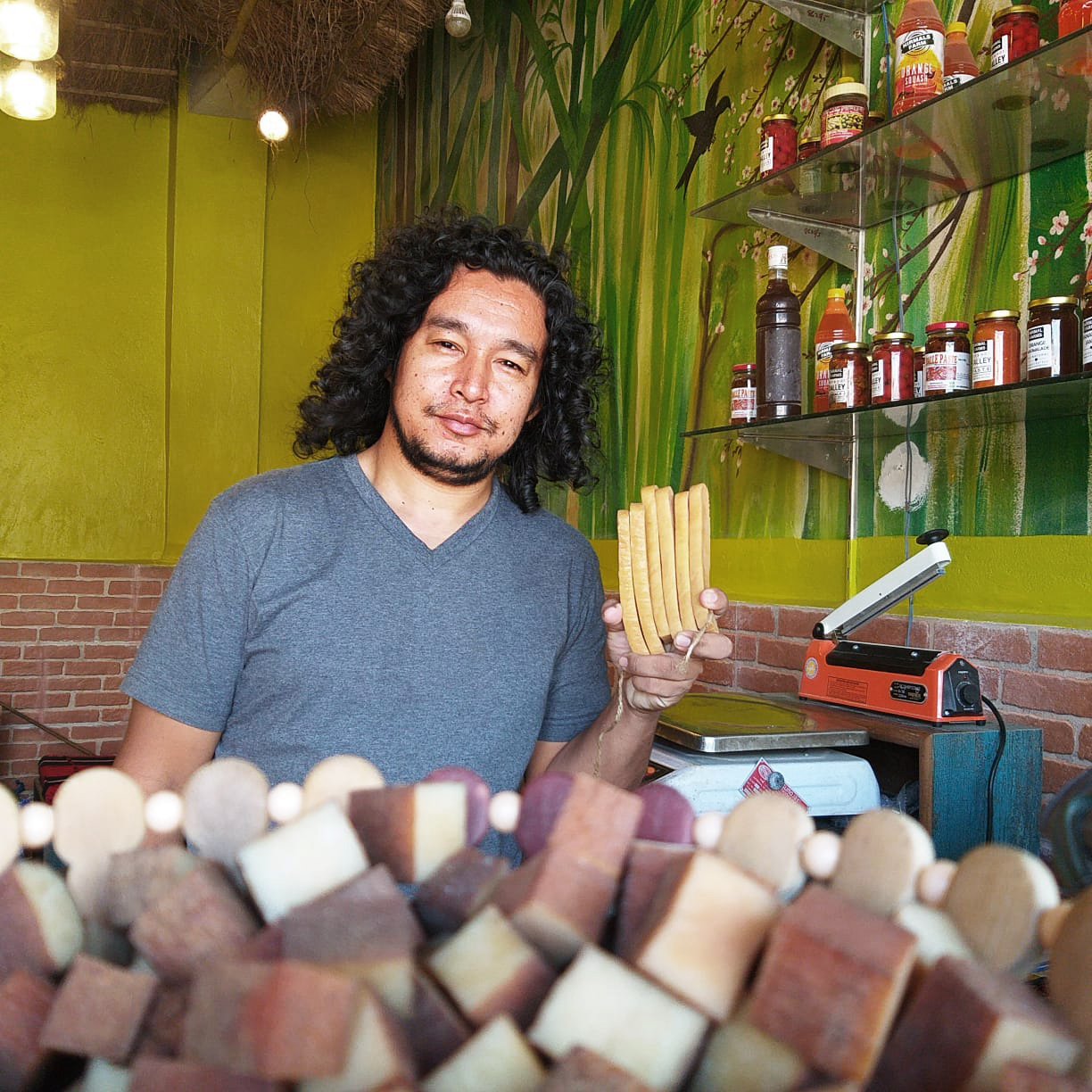 Samuel Yonzon stocks sun-dried and smoke-dried varieties of the chhurpi, or hard cheese which has its origin from the Tibetan and high-altitude Himalayan civilisation. Photo: courtesy Samuel Yonzon

His childhood observations of his family raising cows coupled with later experiences of seeing small enterprises thrive in Kathmandu kept playing in his subconscious. He started speaking to small dairy farmers in the neighbouring villages to get milk for his enterprise. With deep respect for Yonzon’s father, who was a pioneer in agriculture in the area, they trusted him with their produce. Today, Yonzon’s dairy enterprise produces 300 to 400 packets of half-litre milk, paneer, butter, greek yogurt and chhurpi daily. Also in the past five years, he has helped raise the price offered to a dairy farmer from a paltry ₹15 a litre to ₹35.

It was serendipity that led him to Khushnarayan Sharma on Facebook. Both were seeking to connect with experts in the field of dairy and cheese making. “We built up a good chemistry and started to share our learnings. Today, we have our respective businesses, but are associates on the cheese project,” says Yonzon.

Together they want to revive the long lost art of Himalayan cheese making, using milk of the local grass-fed cows. This includes the Kalimpong cheese which was introduced by Swiss missionaries in the 19th century by bringing in Swiss Brown cows and machinery from back home in Europe. This Swiss Dairy, started under a charitable trust, had employed a lot of locals from the 7th Mile area in Kalimpong. “Later, mismanagement and staff carelessness led to the downfall of Swiss Dairy,” says Yonzon. Also, back then the rennet, an enzymatic coagulant used to be made by killing animals, particularly the one taken from a newborn calf's fourth stomach, which caused Hindu extremists to agitate. Today, however, plant-based rennets are available, so that’s no longer a hurdle. “The Swiss Dairy also used to produce the famous milk lollipops, which are being revived by a friend who runs Dahal Dairy. There are other people who do it too, but they use powdered milk, desi ghee (non-Himalayan) and sugar. He does it the proper way,” says Yonzon.

Both he and Sharma started by visiting local cheese factories. While researching the cheese made by the Swiss Dairy, they also ended up collecting oral histories of Yonzon’s father and uncle of their visits to the Swiss farm, which almost seemed like stories from another time. “The Swiss Dairy would make a semi-hard Emmental style of cheese with rind using propionic bacteria. This rind would be scraped, washed daily and turned upside down,” he adds.

Yonzon does sell this kind of cheese at his store, but it comes from Pashupati Nagar in Nepal, which is at higher altitude and hence cooler than either Darjeeling or Kalimpong. The border town that connects the two is Mirik in Darjeeling. Yonzon also stocks sun-dried and smoke-dried varieties of the chhurpi, or hard cheese which has its origin from the Tibetan and high-altitude Himalayan civilisation. The smoked kind is being manufactured in Darjeeling by Tej Dairy, owned by his friends Nitin and Pankaj, and sundried by Khushnarayan. It is a hard milk cheese coagulated through natural lactic acid, and is a great source of Omega 3 fatty acids and antioxidants, besides the essential vitamins and minerals.

Sharma and he are yet to make cheese on a commercial scale. “We will only do it once we have a proper market in cities like Mumbai, Kolkata and Delhi, where there is a lot of potential. There is no market for cheese in the local area,” he says. Sending the products from Kalimpong to the cities is a challenge. The refrigerated vehicles that come ferrying ice creams and other cold products to Kalimpong turn off their cooling system on the way back. They demand for a truckload of consignment to be carried back in return for switching the refrigerator back on. “We are looking at other ways of sending stuff through the cold chain. Cheese requires a certain kind of capital, which remains stuck until the produce is sold. There are no loans or funding available at the moment, which is required to purchase vats and steam boilers. Secondly, factories that make Himalayan cheese in Nepal are very guarded about their systems. They don’t want to train you,” says Yonzon. There were plans to start a cheese cellar this year as well, which are currently on hold due to the pandemic.

But the duo is positive that someday they will be successful in their efforts to revive Swiss-style Kalimpong Himalayan cheese.. “Assad will be representing us in cities in western and northern India. Anyone who wants good quality cheese can pay upfront and we will send a sample,” he says. The future, it seems, holds a ray of hope for Himalayan cheese.