Ever Wondered Where The Earthen Vessel For Mahaprasad Come From?

The Mahaprasad sees fifty-six varieties of dishes that gets cooked in the ancient historic temple kitchen in Puri.

Think Puri, think Jagannath Temple and no visit to the temple is complete without getting yourself some Mahaprasad, the holy food. The most scared Prasad that’s sees fifty-six varieties of dishes being cooked in the ancient historic temple kitchen which believed to be the largest in the world. Then it is offered to the Deities temple. The Mahaprasad sees rice, dal and other selected vegetables is cooked in accordance to method that has bene followed since time immemorial. The prasad is first offered to the Lord and then to Goddess Bimala post which is gets into the stature of Mahaprasad(Abadha).

This the holy food, can be relished by one and all. Packed in terracotta vessels people carry the this Mahaprasad far and wide to different places. But have you ever wondered where does these clay vessels come from? These potteries are linked to the small place called Kumbharpada (potters’ settlement) in Puri. Supposedly these traditional potteries from Kumbharpada dates back to 12th Century, the same time when Adi Shankaracharya started the ritual of Mahaprasad at the temple. Shri Vedveer Arya in his book "Chronology of India” has highlighted some points which further confirms the fact that these potteries must have been in use from more than 2000 years. Laxiprasad one of the potters from the villages says “We have doing this for generations and we all believe that this is literally our privilege. Right from getting the right kind of soil that is free from any stones or anything we make the clay mixture, make the vessels/pots and then lay it to bake till it’s fully and finally done”. Not to miss the fact that baking big utensils like big clay utensils like kudua and handi takes at least a weeks’ time and it’s a long process. These vessels are covered with broken and unusable other clay utensils, hay which makes sure that the heat doesn’t come out.

One of the main reasons why the Mahaprasad is cooked in these earthen vessels is soil is considered pure and sacred. Also scientifically seen food cooked in earthen clay pot helps to retain most of its micronutrients and other benefits. Being a non-toxic type and environment friendly these vessels makes for a best choice.

These potter families who are supposed to have settled around Kumbharpada around 12th Century. It’s said the Lord Jagannath, Lord Balabhadra, and Maa Subhadra are till date offered Mahaprasad in ‘handi’, kuduas’, ‘olis’ and several other earthenware that are crafted by these potters. There are three other localities in Puri that boast of potter’s settlement - are Nua Sahi, Tikarpara village near Indradyumna pond and Gopalpur on the outskirts of Puri. 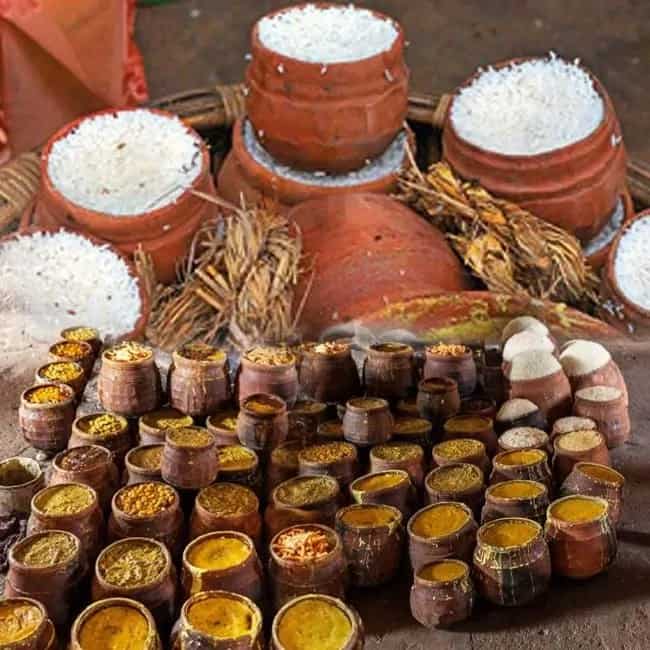 The clay used to make these potteries are brought by the woman of the house. Currently the settlement of Kumbharpada only sees 50-70 families who are engaged in making these vessels. They are the only ones who are carrying forward their ancestral profession. While making these pots they have also to maintain hygiene and follow food restrictions.

This locality sets a great example of equity of labour as men and women from each household the work is well divided. While the woman are involved in making olis’ fin which besara, Mitha Dali, Saga Bhaja and other offerings are served; the men make the larger one the ‘handi’ and ‘kudua’. These clay pots supposedly have lotus petals etched on them.

Next time you have a chance to taste some Mahaprasad, say a little thank you to these potters.