Choosing the correct kind of meals is critical for getting back on track. Dealing with fever is a difficult task because it fully depletes your body's vitality, leaving you weak and vulnerable. In such a case, your body requires food that is easy to digest while still providing energy. Choosing the correct kind of meals is critical for getting back on track. Avoid greasy, creamy, and sugary foods during this period and instead, stick to the foods listed below. They will not only make you feel better but will also energise your body, allowing it to combat the fever.

It is critical to stay hydrated when suffering from cold or flu symptoms. Herbal teas are relaxing, and inhaling their steam might aid in the removal of mucus from the sinuses. A cup of hot water with ground turmeric in it may help to soothe a sore throat. According to research, turmeric contains anti-inflammatory and antibacterial effects. Tea leaves have a high concentration of natural plant chemicals such as polyphenols, flavonoids, and catechins. These boost the immune system. Catechins, in particular, may offer protection against specific influenza viruses.

Citrus fruits including oranges, lemons, and grapefruits are high in flavonoids and vitamin C. These strengthen immunity and lessen inflammation, which could help in the resistance to a fever. Some research suggests that quercetin, a flavonoid found in berries, may help treat rhinovirus infections. The majority of common colds are caused by this virus. Fruit juices that have been frozen and mushy can often aid to relieve a sore throat.

When the stomach lining gets irritated, it causes an upset stomach. Tannins, which are included in coconut water, may aid to relieve inflammation. Coconut water also contains a lot of minerals including sodium and potassium. They can assist the body in promptly rehydrating after diarrhoea or vomiting. According to one study, coconut water can deliver the same degree of hydration as a sports drink. It is also healthier because it contains no added sugar.

A single cup of oatmeal prepared with water contains about 4 grams of fibre, which is about 16% of an adult's daily fibre need. While oatmeal just contains the oat germ, oat bran also contains the fibrous husk. As a result, it has 5.7 grams of fibre per cup, making bran even better for digestion. Raw oats have more fibre per serving than cooked oats and are great in smoothies. When consumed raw, rolled oats digest more easily than steel-cut oats. When eating dry oats, it is critical to stay hydrated. The extra fibre from blended fruits will also aid with constipation relief. 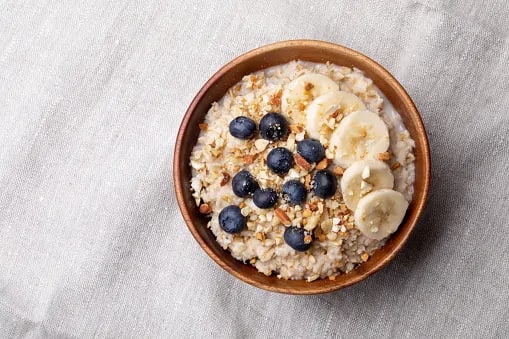 Flaxseed is particularly beneficial for maintaining regular bowel motions due to its high soluble fibre content. It's also high in omega-3 fatty acids, which are needed for good health. There is some evidence that omega-3 fatty acids can prevent intestinal inflammation, which can occur after long periods of constipation. Because the seed's outer shell cannot be digested, people should consume pre-ground flax. This will allow the beneficial nutrients to be absorbed by the body. Ground flaxseed can be mixed into cereal, smoothies, and baked.

Ginger Candy; Natural And Home-Made Cure For Flu And Fever

Try These Healthy Recipes To Boost Your Immunity During Monsoon