Dishes You Can Make With Wasabi

Try these dishes that you can make with Wasabi and add a fiery kick to your meals. Wasabi, often known as Japanese horseradish, is a plant in the Brassicaceae family, which also includes horseradish and mustard. An aromatic sauce produced from its ground rhizomes is used on sushi and other meals. It has a flavour that is more akin to hot mustard or horseradish than chilli peppers, and it excites the nose rather than the tongue. However, most commercial wasabi flavouring is ersatz, made from horseradish and food colouring. Although a metal oroshigane is commonly used to grate wasabi, some people prefer to use a more traditional tool made of dried sharkskin. You can also use a hand-made grater with uneven shark teeth. If you don't have access to a shark-skin grater, a ceramic cheese grater will suffice. Wasabi has long been a part of our daily lives, growing naturally in the cold, clear flowing streams of deep mountain places around Japan. It has also been utilised for medical purposes dating back to the Nara period (710-793 AD). Around the year 786, the Japanese Buddhist monk Kohbou-Daishi transported wild-growing wasabi from Mount Koya to the Chuzen-ji Temple area in Mie Prefecture. The fleeing Heike warriors defeated at the battle of Dannoura (1185) are reported to have taken wild-growing wasabi from the Kidani-kyo Gorge, used the roots to garnish sashimi of yamame (landlocked salmon) and deer, and pickled and ate the plant's stems and leaves. 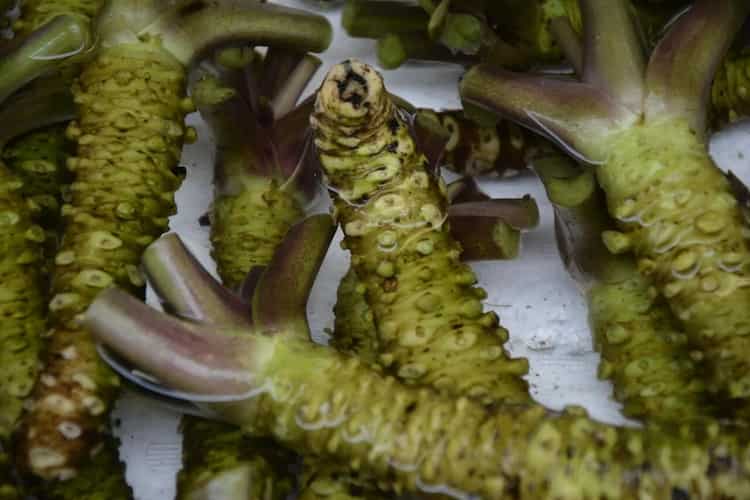 Here are some dishes you can prepare with Wasabi

Guacamole is traditionally prepared by crushing peeled, ripe avocados with salt in a molcajete and tejolote (mortar and pestle). Lime juice, cilantro, onions, and jalapenos are frequently used in recipes. Sour cream, tomatoes, basil, or peas may be used in several non-traditional dishes. All you have to do is add wasabi powder to the usual recipe. It will add an enhanced flavour to the guacamole and will make it even more interesting.

Cucumber and avocado make the salad refreshing and add a cooling touch to it. Wasabi is added to give it a little fiery kick. The combination of cucumber and wasabi adds a balanced flavour to the salad. You may also use wasabi ranch dressing for an enhanced flavour.

Nowadays, icecreams come in different and unusual flavours but have you tried Wasabi ice cream yet? Wasabi adds a hot and pungent flavour to the ice cream. With every bite you take, you will fill that the chilled ice cream is bursting in your mouth with all its sweet flavours and wasabi's added hotness.

For all those who like having different types of egg dishes, this one is sure to win your hearts. Wasabi devilled eggs is an easy recipe to make. Cut the boiled eggs in half. Take out the yolk from each egg and break them into crumbs. Add some mayo, wasabi, salt and pepper to the crumbs and mix well. Now, fill the eggs with this yolk and wasabi stuffing and enjoy your fiery meal!

Watch Johny Lever's Tryst With Wasabi And Its Origins