He also remarks how it was a “choti si gal (a small feat)”, but he found it to be worth a “shabashi”, We love genius hacks, and if we manage to figure it ourself, our joy knows no bounds. Looks like actor and singer Diljit Dosanjh is no different. Dosanjh, who will soon be performing his concert in Gurgaon is quite inarguably one of the most entertaining stars to follow on Instagram, especially when is up to cooking something. After flaunting his paneer and banana cake, this time Dosanjh took to Instagram to give us a peek into his morning ritual of drinking Ajwain and Fennel tea. It appears like he had already soaked ajwain (carom) seeds and saunf (fennel) seeds in water, but when it was the time to strain the liquid, he couldn’t find a strainer or channi. This prompted him to use cheesecloth as a strainer. As he poured the tea into his cup, the liquid remains were collected in the cup while the ajwain and saunf mixture was collected on the top of the cloth.

“Here we go guys, waah I am proud of myself”, he could be heard saying in his Instagram story. Further, he also says how it was a “choti si gal (a small feat)”, but he found it to be worth a “shabashi”, adding that he often commends himself over such small achievements as self-love is important too. In his later stories, he pans the camera towards the mirror and says, “I am proud of you my brother, very good” and encouraged his fans to never feel lonely, even when alone. “I love my company”, Dosanjh remarked. 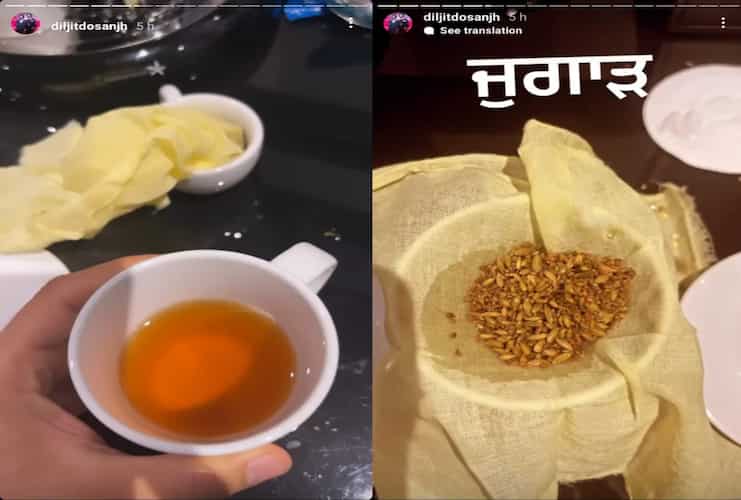 Diljit’s morning ritual of drinking ‘Ajwain-Saunf Ka Paani’ is actually something that many experts recommend for healthy detox, weight loss, and glowing skin. Both ajwain and saunf are replete with anti-inflammatory and antioxidant properties. Further, it helps cleanse your system, and facilitates weight loss, while building your immunity.

It is fairly easy to make it. All you have to do is take one tablespoon of carom seeds and one tablespoon of fennel seeds, add it to a bottle of water and leave it overnight. Strain and drink, Alternatively, you can also make a herbal tea with it. Take a pot, add a cup of water, followed by 1 tsp of ajwain and 1 tsp of fennel seeds. Bring the water to boil. Let it steep for 5 minutes. Strain the tea and drink hot.

“Like A Homecoming”, Mira Kapoor Dines At Her Favourite Asian Place, Guess What She Had