The model-turned-actor is a foodie, who has confessed about her first love on Instagram several times. She has often talked about how she doesn’t like to share her food and enjoys trying out new dishes. While it may be hard for some to believe that she satiates her cravings given her great physique, it is a fact that food is one thing that can lift her mood One of the fittest actors in Bollywood, Diana Penty loves eating burgers, pizzas, noodles, and more. Still known for her debut film, Cocktail, Diana stunned everyone with her performance in her subsequent movies too. However, when fans turned to her social media profile, they realised that she’s a big-time foodie too. This made her even more relatable.

Also Read: What Makes This Oats Dosa Ideal For Weight-Loss?

Constantly posting about her daily nibbles, this time we caught Diana having a Masala Dosa. With immense love for South Indian food, you’ll often find her eating dosas and idlis for breakfast. Sitting in her hotel room, the actor posted a video of herself eating Masala Dosa on her Instagram feed. What was interesting was that she actually revealed her favourite way to eat the Masala Dosa. Moreover, she even did a poll, asking her followers to tell her if they liked their “masala on the inside or on the side”. 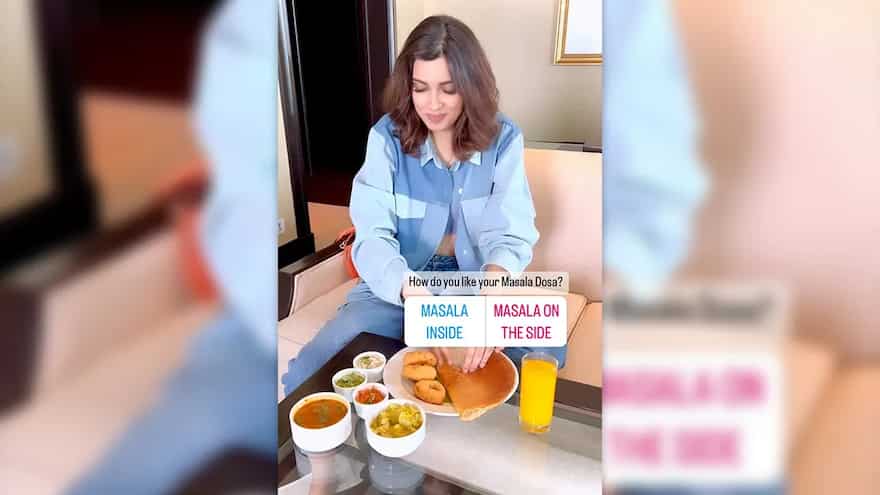 She was seen taking a bite of her dosa, while saying, “Anybody else like masala on the side rather than in the dosa? Hands up”, and she raises her hand to show her approval of this way of eating the dosa. Interestingly, in the comments, one could find several users commenting about what they thought of this idea. One of them was quick to say, “This is the most honest you’ve been on reels”, while several others agreed in unison that the masala should be kept on the side.

One of them even highlighted the fact that, “Obviously on the side so that the dosa remains crispy”, which is actually quite true. Earlier too, Diana has shared glimpses of her breakfast, where she posted a picture of dosa, vada and coconut chutney and called it her “breakfast of champions”.

Schezwan Dosa: This Indo-Chinese Fusion Will Make You Slurp