Decoding The Local Flavours of Uttarakhand The Himalayan belt of Uttarakhand is known for it’s richness in traditional knowledge, flora and fauna. With different type of climate, altitude, river, soil, forests of Uttarakhand is suitable for growth of all kinds of plants, shrubs and bushes that are finding their way to mainstream cuisine. Chef Pawan Bisht Corporate Chef and R&D Executive, One8commune By Virat Kohli had been happily showcasing his Uttarakhand culinary skills over the whole of lockdown. Cooking everything that was locally grown in the wilderness of the hills he brought it to the kitchen and showed how tempting and hearty it can be. Stranded in his hometown, almost whole of 2020 at his native village Chhoi and cooking up a storm he says “The cuisine of Uttarakhand is similar to it's people, simple yet incredible apart from being one of the healthiest cuisine one will ever experience. We people in the hills always have the advantage of using fresh, locally grown ingredients that absolutely play an important role be it in taste or health benefits”. 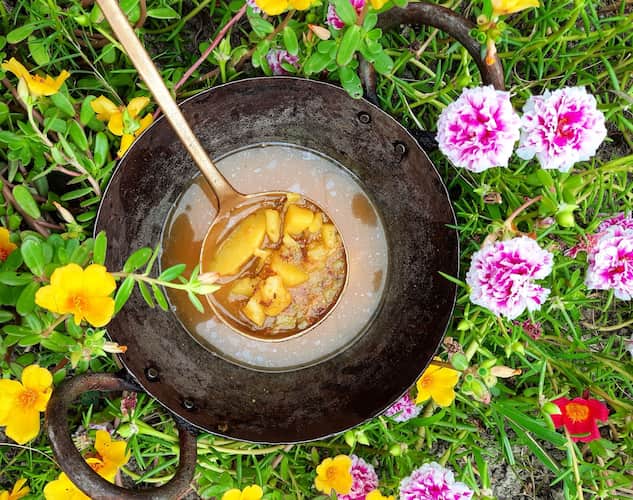 It all started for him when he first uploaded a series of videos demonstrating how to make Bhatt ke Dubke, (Bhatt is a locally grown lentil). While he posting he had no clue that he would wake up being bombarded with number of messages who also expressed their eagerness to see such content more. Adding further he says “Uttarakhand is house to super food and super ingredients like hemp seeds, madua(finger millet), jhangora (barnyard millet), bedu (wild Himalayan figs), bhatt (black soyabean), Jakhiya (wild mustard) etc and the list is almost endless. Not many know this cuisine also gets the name of Ayurvedic cuisine (still never fails to wins hearts through the taste)”. With the limited use of spices and that also helps to retain the foods natural flavours of the food, the use of some age old and unique ingredients have also seen much medicinal value.  For example Rajjada which is a lost Dish now is used to cure Jaundice. Different type of salts made with hemp seeds helps to cure sunstrokes and fever. An IHM, Mumbai graduate, Pawan who had been working in city kitchens for years found this break from usual much refreshing and something g that absolutely worked in his favour.  While he had all modern equipment’s in his restaurant kitchen, back in the village it was literally wilderness as he used to open fields in natural surroundings. “Different cooking techniques like khadd cooking, cooking in desi chula and use of unique cooking vessels also play an important role in cooking and cuisine of Uttarakhand. For example Bhaddu and tauli are two unique vessels which are used for different reasons like they help in cooking at the high rises and the metal they are name of gives a unique taste to the dishes” he confides.

Currently the survey says the agro biodiversity of Uttarakhand has 160-170 plant species belonging to 57 families. There are almost 3000 edible plant species known to mankind while being cultivated or commercially grown. “Seasonal influence of vegetables is much prominent in our cuisine, giving vivid flavours to the inhabitants. Like winter is famous for dried products especially like dried bitter gourd, Kulth ki dal, Gainthi ki sabzi, kakri ki badi and dried meat ‘Suksa’. While spring brings plenty of greens and the famous linguda-a type of fern, leafy vegetables like rai saag and palak (spinach)” confirms the Chef. From perennial herbs to edible tubers one can get one of the most healthiest herbs, spices, fruits, berries, vegetables in the lush green hills of Uttarakhand. This is the right time to preserve these wonderful recipes, ingredients, cooking vessels and cooking techniques before they will be completely lost. Chef strongly believes that this cuisine has much protentional to be in the forefront and get it’s much delayed fame.

Tehri: The Comfort Food That Has A Spot In The Repository Of Awadhi Cuisine

These 6 Spots Are Serving Authentic Bihari Cuisine In Delhi