This sandwich can be easily prepared at home Sandwiches are one of the quickest and easiest breakfast or snack recipes. It hardly takes five minutes to prepare a sandwich. It is said that something which can be made quickly is definitely not healthy, but a sandwich is that dish which could be turned healthy as per people’s liking by adding lots of healthy vegetables or even basic chopped avocados, olives and drops of healthy essential oil. Sandwiches could be found in varieties, starting from nukkad’s street-style sandwiches with lots of butter and cheese in it to Bombay Sandwiches, which are healthy and easy to make at home. Here bringing you a recipe of mayo sandwich stuffed with chicken which is heavenly delicious and juicy because of the tender meat and the creamy mayonnaise.

It is believed that the concept of wrapping vegetables or slices of meat inside flatbreads was started by ancient Jewish sage, Hillel the Elder who wrapped meat and bitter herbs in a soft matzah, a flat unleavened bread. The word sandwich is named after ‘John Montagu, 4th Earl of Sandwich’. who was an 18th Century aristocrat. It is said that he was fond of this kind of food because it helped him to play his game of cards without the cards getting greasy with meat. Sandwiches became popular overnight in Spain and England during the nineteenth century and in the early 20th Century, when breads became staple in America, sandwiches became a trend. 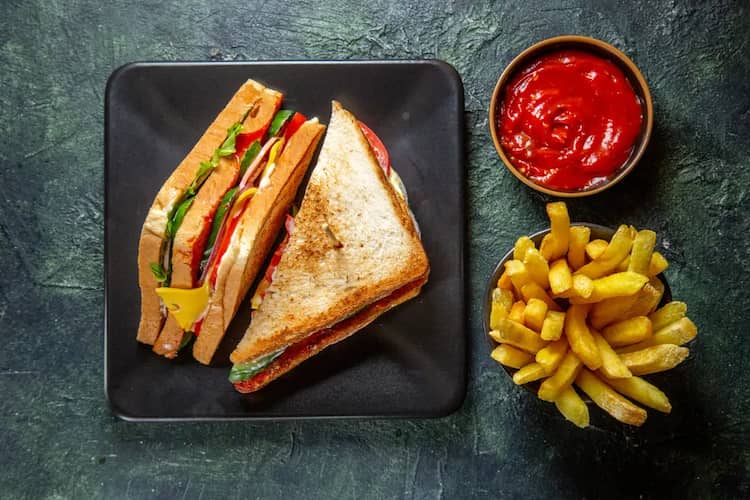 Sandwiches are quick, easy, and convenient. The seasonings in the fillings of meat or vegetables add flavours and enhance the taste. It could be prepared for breakfast or could be packed in tiffin boxes for the kids. Chicken Mayo Sandwich is loved  by children because of the saucy, creamy mayonnaise in it.