To prepare authentic Chinese cuisine and gain knowledge about it, one of the first names that appear is Chef Liang. Starting professional cooking at the young age of 19, he has become an encyclopedia of food, especially of native grubs of China. Winner of several prestigious honours and titles, Liang has won the hearts of international dignitaries, including Bill Gates, Bill Clinton, the Sultan of Brunei, anyone who can't resist the flavours of pan-Asian food Master Chef Liang Xiao Qing is a name aspiring chefs look up to. In his illustrative career spanning over four decades, he has numerous milestones that ethced a benchmark for others. He has been honoured with several awards and distinctions from around the world, including the title of Master of Chinese Cuisine and the most prestigious young chef title in China. Representatives of the Chinese government in India and the Chinese expat community favour him as their go-to Chinese chef.

Liang started his career as a commi at the Great Wall Sheraton Beijing and rose to become their Executive Chinese chef. Cooking skills have been innate to him. Even in the initial years of his career, he mesmerised everyone with his self-taught prowess and techniques at many commercial kitchens of leading hotels. He joined ITC Hotels as Executive Chinese Chef and was a core member of the team that opened the ITC Grand Maratha Sheraton in Mumbai. He launched the hotel's eclectic dining destination Pan Asia putting it onto Mumbai's culinary must-dos. Liang repeated the same for many other outlets of the said brand.

Chef Liang has been featured on the Nestles tabletop calendar, which boasts of China's best culinary talent. He has served his culinary fares to esteemed dignitaries, heads of states and luminaries. The list includes Bill Clinton, Bill Gates, The Crown Prince of Saudi Arabia, and The Sultan of Brunei, to name a few.

Master Chef Liang always has a creative edge and has been a trailblazer. His most outstanding contributions to the F&B industry are his extraordinary skills and mentorship that he imparts to his team and his ever-expanding clan of chefs. Having spent an extensive tenure in this business, Liang's prodigies are numerous, as are his fans. In an exclusive interview the veteran culinary maestro spoke about many facets of his life, Chinese food and Chinese New Year.

Q. What made you take up this profession?

I developed an intense passion towards cooking at an early age. I remember how evenings were my most exciting time of the day, as I used to love cooking dinner for my parents. Whilst they returned from work, piping hot dinner prepared in a homely style used to await them on the table. It was a great relief for my parents. The bliss on their faces was my reward. They used to appreciate my efforts. I was barely 10-11 years old then. As I grew up, taking up culinary art as a profession was a natural choice. I entered the professional world at the age of 19.

Q. How many years have you been working as a chef?

It's been almost 40 years as a chef for me. Over these four decades, I have also trained many who are among the finest chefs in the world. And I am just loving what I prepare for my guests.

Q. What have been the major turning points of your career?

At every new transition, I levelled up for my next set of challenges. Nevertheless, one defining moment in my career appeared in 1987. I won the prestigious Super Chef title with great ease and élan. I was barely 26 years old. It was a significant turning point.

Q. What has been your biggest achievement?

Whilst achievements are many, I would like to throw some light back in 1987 when I won the coveted Super Chef. The following year I silenced the critics by winning the gold medal in the Sichuan-style cooking contest. It gave me celebrity status in China. It opened new avenues for me, and I started doing many cookeries shows on television.

Q. As a seasoned culinary expert, what changes have you observed in the food scene, F&B and overall diners' behaviour?

With the years passing by, the F & B industry is evolving tremendously. One thing which needs to be highlighted is the travel industry. Because of this, many guests have travelled across the globe and tried a variety of cuisines. For example, several patrons understand what they are ordering in the restaurant and how they would like their dish or delicacy to be prepared. Thus, diners have evolved and grown aware. We, as chefs, now love to listen and understand what our guests expect of us.

Q. Which cuisine is your forte?

I am adept in Guangdong, Sichuan and Beijing cooking styles; Chinese cuisine is my favourite and forte.

Q. Chinese New Year is upon us. How is food intertwined with this festival?

Every household cleanses the home and kitchen during the Chinese New Year. Prayers and specialities to the Gods are offered in a religious manner. The Jade Emperor is in charge of Heaven, Earth, and Hell. Just before Chinese New Year, the Jade emperor sends the Kitchen God to inspect every family and determine whether there have been any good or bad deeds. During Chinese New Year, people offer prayers and food to the gods and the emperor. Festive grubs have unique meanings associated with foods like fish, dim sums, noodles, and much more. Thus, it goes without saying that food is closely intertwined with this festival.

Q. Is there any dish which considered to be a good luck fetcher on Chinese New Year?

During the Chinese New Year, every food served has a particular significance. There is an array of dishes that are considered to be good luck fetchers. Fruits are signature elements of the Chinese New Year. A few picks used in garnishing or dishes are usually oranges, tangerines, and pomelos, as they are round and "golden" colours that symbolise fullness, luck, and abundance. The Chinese name for orange is 'cheng', which sounds akin to the Chinese word for success. Likewise, pomelos are believed to bring steady prosperity. Spring rolls and dumplings denote riches, whereas sweet rice balls signify unity within the family.

Q. Can you name a few dishes and ingredients integral to Chinese New Year?

There are plenty! Noodles represent the longevity of life. The variants used for the festivities are typically extremely thin ones made of wheat. These noodles are longer than regular ones, which are often boiled and served in bowls with broth rather than fried and placed on a plate. A whole chicken is another staple chosen for 'Luck' and 'Wholeness'. It is mainly during festive occasions, family gatherings, and brunches. Often, chicken is prepared full- head and feet included during family gatherings. It marks a good start to the year and the event. Similarly, fish symbolises prosperity and is often relished as the last dish in the main course. Hence, preparing these dishes at home and indulging in them during this festive season is a good start.

Q. Can diners sample them during this festival season?

Yes, of course! If you enjoy authentic Chinese cuisine, try it at Shanghai Club, ITC Grand Central, Parel. From January 15–22, 2023, we are presenting the finest regional cuisines of China. 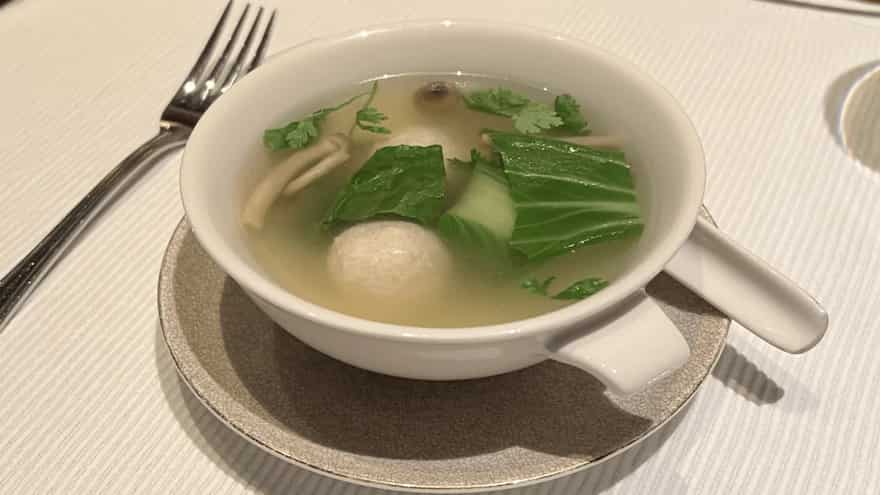 A dizzying array of handcrafted specialities is available to diners, including Pomfret with Bamboo Shoots and Garlic, Lotus Roots with Golden Garlic, and Chongqing Spicy Noodles with Chicken and Chicken Meat Balls in Clear Broth among many other dishes.

Meanwhile, I am sharing a recipe one can prepare at home effortlessly. I wish you all a happy and flavourful Chinese New Year!

Chinese New Year 2023: 8 Spots In Mumbai For An Asian Feast

Look What Kolkata Has On Table For Chinese New Year