Their tiny chonmage (topknots) and scanty mawashi (loincloth) are probably the first things that come to our mind when we think of the heavy and haggard sumo wrestlers. But it’s actually a special bowl of Japanese stew that delineates this antique sport. Called Chankonabe, this pot of bubbling broth comprises tonnes of vegetables and meat, and is traditionally eaten by sumo wrestlers in the form of a well-balanced meal.

Call it versatile or customised, there is no fixed recipe for this robust, high-protein dish that sumo wrestlers religiously consume almost all day. What it usually features include meat or fish, vegetables, tofu, and huge chunks of calorie-rich mochi - a starchy cake made from rice. Chankonabe is, of course, a hearty meal, but not necessarily fattening. Chicken, miso, soy sauce, salt or kimchi is often used as a base for this soup. Most sumo stables in Japan, where wrestlers train and live, serve their own signature Chanko. One may find similarities between this soup and Shabu Shabu or other hotpot dishes that the country is famous for. The popular choices of vegetables for this stew include carrot, daikon, green onion, napa cabbage, gobo, mizuna and chives. In terms of mushrooms, they usually pick shiitake, enoki, maitake, and shimeji, among others. 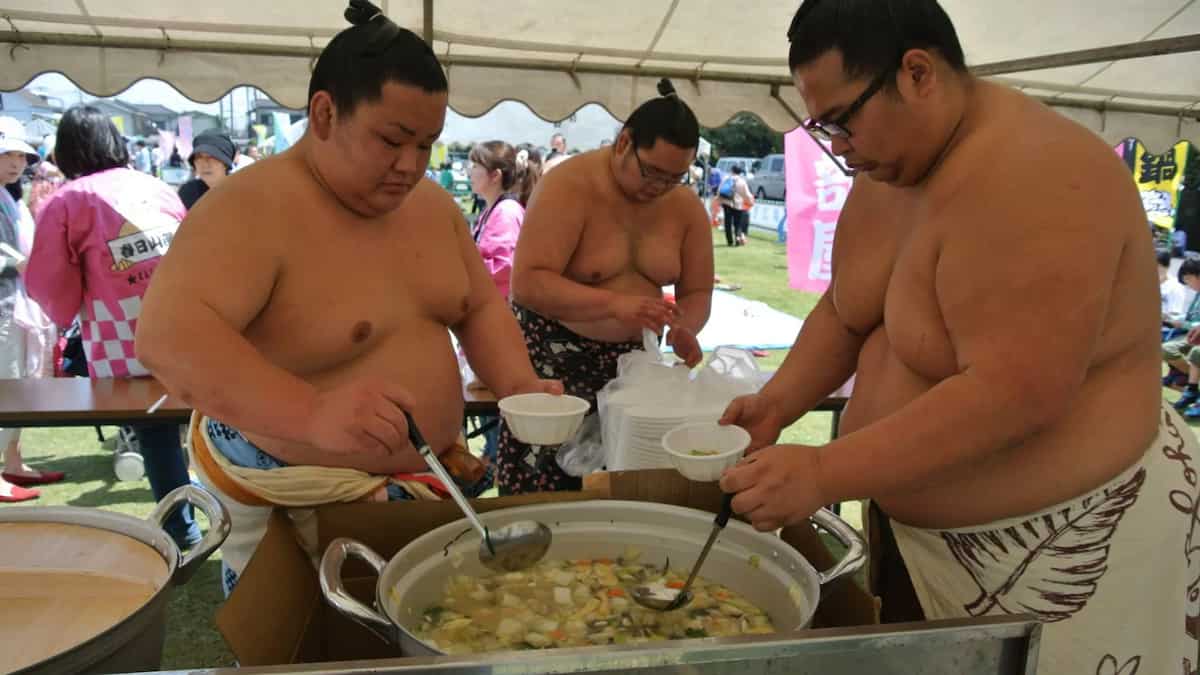 Easily the mainstay of sumo dining, wrestlers often skip their breakfast in order to build up an appetite and then consume copious amounts of the Chanko stew - as much as 10 bowls in one go - along with rice and plenty of beer. The leftover soup is later eaten as broth with sōmen or udon or chuka noodles. In his book, titled ‘Sumo: A Thinking Fan’s Guide to Japan’s National Sport’, author David Benjamin wrote: “You’re encouraged to eat all you want and have ‘thirds’ on dessert. You nap all afternoon, and drink beer all night.” There is a quirky trivia regarding the choice of meat for the Chankonabe that is served during sumo tournaments. It’s almost always cooked with chicken. Why? It is said that ‘a wrestler should always be on two legs like a chicken, and not all four’.

Churning out massive quantities of the coveted stew every day is no cake walk. Hence, ‘Chanko chores’ are divided in every sumo stable. In fact, to be given the responsibility of running the Chankocho (the kitchen) is considered a respectable position. Typically, duties include planning the menu and budgeting, buying groceries, chopping meat and vegetables, cutting matchbox-sized chunks of mochi, and setting up the dining area. These duties are usually fulfilled by entry-level wrestlers, while the seniors are tasked with entertaining guests and patrons. Seniority comes into play while serving Chankonabe. Traditionally, senior wrestlers are served the first bowls of the stew, followed by any guests at the heya (training house), and then the junior wrestlers get their bowls. Call it the love for the national sport or simply the irresistible flavours of this aromatic dish, Chankonabe is no longer just a niche affair. This traditional meal is enjoyed just as much in Japanese households as well as restaurants. It’s a popular delicacy served at restaurants that are typically run by former sumo wrestlers. Established in 1937 in Tokyo’s Ryōgoku district, Kawasaki Chanko is the first among such eateries. You’ll also find chanko-flavoured instant ramen at supermarkets now.