Camel Drool For Dessert? What Is Portuguese Baba De Camelo

We can assure you that no camels have been drooling over this 2-ingredient dessert, but you might be! For children growing up in Portugal, a big, chilled bowl of ‘camel drool’ (or Baba De Camelo, as the true Portuguese name goes) is a favourite end to a meal. And for their parents, it’s a mercifully simple recipe for even the busiest days. The rich caramel gooiness makes Baba De Camelo not just easy to make but easy to eat, and the playful name is thought to be a nod to the dessert’s consistency and light brown colour.

The main components of Baba De Camelo are sweetened condensed milk - slow-cooked until it becomes a thick dulce de leche. Egg yolks -  a popular staple in many traditional Portuguese desserts and whipped egg whites. As the condensed milk cooks, it takes on a rich, almost nutty flavour that contrasts well with the fluffy texture of the egg whites which are folded into the caramel before the dessert is chilled. Many people prefer to leave it there, letting simplicity shine through but it’s also a common choice to top the dessert off with ground nuts or a crunchy biscuit crumb. 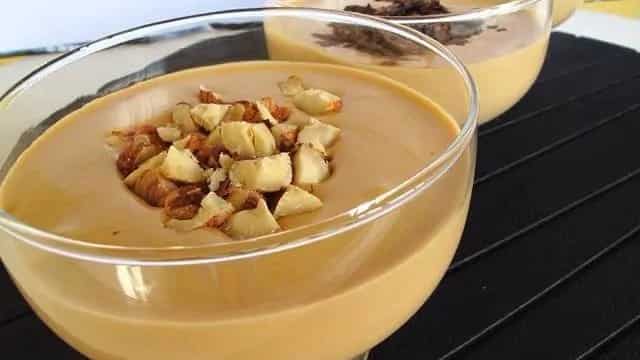 According to urban legend, this simple recipe was conceived in the early 20th century when a lady heard a knock on her door and found she had been cursed with unexpected visitors. Not wanting to seem like an ungracious host, she improvised and whipped up her take on caramel custard with the few ingredients she had in her kitchen, giving it an evocative name and hoping to draw attention away from its simplicity. Her invention caught on, and today, it can be found on tables around the country, both in restaurants and homes as quintessential comfort food that celebrates tradition.

•    Heat the can of condensed milk in a pressure cooker for 45 minutes or over a double boiler for 1-2 hours until it’s thickened and dark brown (dulce de leche). Let it cool to room temperature.

•    Separate the egg yolks from the whites in two bowls.

•    Whisk the egg yolks and dulce de leche together.

•    Beat the egg whites into stiff peaks with an electric mixer.

•    Add the whipped egg whites to the egg yolk and dulce de leche mix. Gently fold them together until combined.

•    Pour the mixture into a large serving bowl or individual ramekins and refrigerate for 3-4 hours.

•    Before serving, top with chopped nuts or biscuits.

The Goan Streets Have A Lip-Smacking Fare To Offer