Five delectable snacks that have earned a reputation worldwide One may argue about how to enjoy a bowl of fries while watching a nail-biting match, sitting on the edge of your seat. But a foodie can give a hundred reasons, and we bet all of them will be valid! The charm of tucking into food while watching a sporting event is something that people have enjoyed for ages. Whether you are sitting at a stadium or in your living room, a variety of small eats are preferred, so much so that we now refer to them as traditions that over time have evolved and become more intrinsic to particular sports. With the IPL fever slowly gripping the nation, we have put together a list of iconic sports foods that enthusiasts call their favourite. The Wimbledon Championships are also a delectable affair. Freshly picked strawberries served with dollops of smooth cream - this yummy English summertime dessert has all the reasons to be a Wimbledon favourite. The tradition of serving strawberries at the tennis tournament began in 1953, while the cream toppings came in during the 1970s. Sports lovers tuck into these red, ripe berries that are especially brought in from the county of Kent. Interestingly, the cream used for this dessert is not whipped or sweetened. Instead, the thick cream is poured over the sweet strawberries and eaten like that. 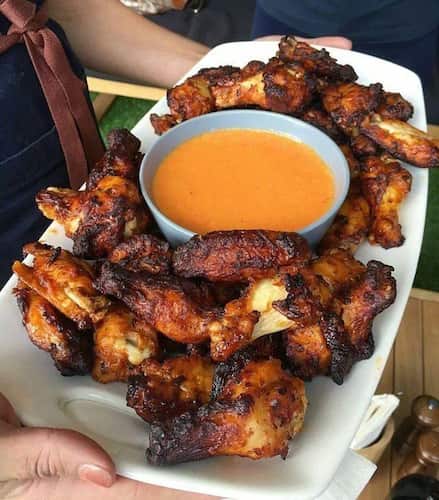 Considered one of the most iconic sports foods ever, a game day without buffalo wings - hot, crispy or baked - is unthinkable for Super Bowl aficionados. The origin of Buffalo Wings can be traced back to Anchor Bar Restaurant in Buffalo, New York, where in 1964 Teressa Bellissimo had whipped up a plate of chicken wings for his son Dominic’s friends. Little did she know that she was creating a global phenomenon. She had deep-fried the wings and added a secret sauce to the dish. This classic recipe still enjoys the reputation of the ‘best wings in the world’. It’s a regular on the menu of almost every Super Bowl party and barbecue night in the US. Crispy and fragrant, Gilroy Garlic Fries are often referred to as the much-awaited things during the baseball season in San Francisco. The AT&T Park is famous for this iconic stadium food. Made with a generous dose of freshly minced garlic, parsley and olive oil, these fries are usually served with a complimentary mint sachet. It is said that Gordon Biersch Brewery and Restaurants’s Dan Gordon invented this garlic and fry combination, which now enjoys a global reputation. It was first made as a late-night snack during his school days. Did you know that Gilroy is also known as “the garlic capital of the world”?! When it comes to cricket, nobody can beat the India assortment of small eats. Cricket matches exude enthusiasm and a mixed bag of emotions - from joy and laughter to anxiety and distress. Thus, you also need a platter of snacks that go with the different moods while watching your favourite teams play on the ground. To celebrate the spirit of the game - test or one-day matches - Indians love munching on Bhel Puri, Aloo Chaat, Vada Pav, onion rings, pakoras, samosas and potato wedges. Needless to say, Maggi noodles, popcorn and chai are also cricket staples. Also popular as shaved ice, ice lolly, ice pop or the desi gola ganda or chuski, snow cones are simple crushed ice topped with flavoured sugar syrup. Vending trucks selling ice cones often line outside sports events during summers in the US. Samuel Bert is credited with inventing the snow cone ice machine in 1919. Among the most favourite flavours of this summer delight are Strawberry, green apple, red cherry and blue raspberry.