Among the many deep-fried savoury delicacies eaten in India, stuffed pakoras are immensely loved for their outer puri-like crispness making way into saporous fillings of various kinds. Each region has its style and tradition of stuffed Pakora. Udupi Style Biscuit Pakora are however a class apart characterised by simplicity of cooking, ingredients and tongue tickling and experience-worthy taste. And what makes them different? The outer crust of the pakoras is made of maida, rava and salt, making them so crunchy and crispy befitting of a biscuit, and that's why they are called such. However, the real fun lies in the roasted and dry rava fillings seasoned mildly with powdered spices, curry leaves and sugar.

The Biscuit Pakoras are famously called Biscuit Rotis and are a traditional tea time snack of Mangalore and Udupi. These are crispy and puffy puris stuffed with spicy and delicious rava stuffing and can be made and stored for at least 2-3 days. They may get soft but taste delicious. These are similar to Kachoris, where the outer crust is made and tastes similar to making Pooris.

Other varieties of kachori made in Karnataka include Hesaru Bele Kachori or Moong Dal Kachori, Namma Adige or Green Peas Khasta Kachori, and Besan Kachori. Biscuit Pakoras neither consume many ingredients nor time compared to the traditionally made North Indian pakoras filled with a heavy stuffing of veggies or lentils. The usage of rava in both pakoras and filling makes them thoroughly crispy. 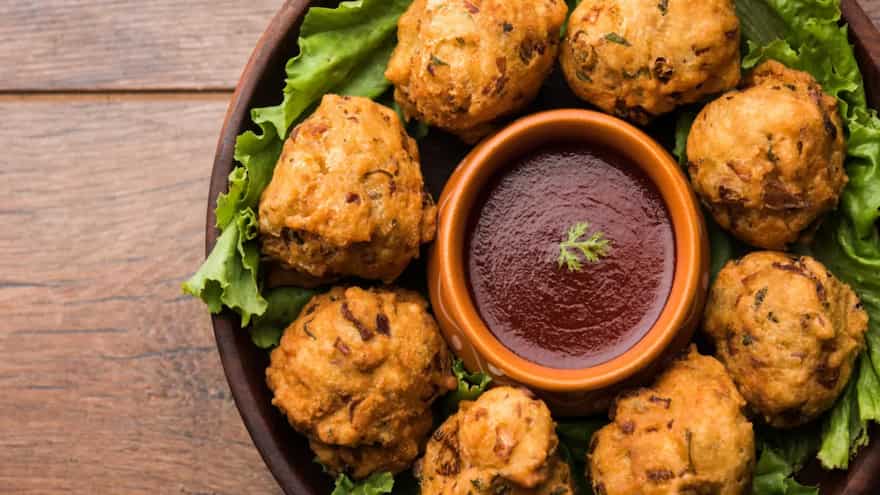 Pakoras are so embedded in our food culture that they seem to naturally belong to us. But the word Pakora has an interesting origin and meaning. The word is derived from the Sanskrit word pakvavata, made of two words pakava meaning cooked and Vata meaning a small lump. The snack is commonplace in South Asia and known by other names as Pikora, Pakodi, Bhajiya, Bora and Ponako.

For the pakoda dough:

•    For preparing the dough, take refined flour, medium rava and salt in a kneading bowl and mix everything well.

•    Then pour water little by little and knead the dry ingredients into a tight dough. Cover and let it rest for 10-15 minutes.

•    Meanwhile, heat a pan, pour oil and add mustard seeds and curry leaves to it and let it splutter.

•    Add salt, turmeric, chilli, coriander and cumin powder to it.

•    Mix everything well, roast for a minute and switch off the flame.

•    Then add the sugar and mix everything again.

•    Then take small balls out of the dough and roll them small and slightly thick.

•    Then place a spoon of rava filling at the centre of it, bring the edges of the rolled pakora together and seal it at the centre.

•    Then roll it again carefully, small and thick and deep fry in hot oil.

•    Fry until both sides puff up and are golden brown.

It’s Snack Time! Get Ready To Indulge Yourself In Rajasthani Chawla Dal Pakoras

4 types of pakoras to try making this monsoon