Watercress, water spinach, wild rice and other aquatic plants and vegetables are just a few examples of the many edible varieties you can find You probably don't give the plants you see in and around the water much thought when you're out for a stroll, crossing a bridge, or just enjoying a walk by the river. But there are lots of other water vegetables and wetland plants that can be eaten, some of which are even good! Of course, not all aquatic plants are edible. Always be sure to seek the help of an expert when recognising wild edible aquatic plants to make sure you don't consume anything potentially harmful. Some aquatic plants that we eat naturally grow in the water. Watercress, water spinach, wild rice and other aquatic plants and vegetables are just a few examples of the many edible varieties you can find. For your convenience, we have sorted a list.

Also read: Kamal-Kakdi: How To Cut And Clean The Nutritious Lotus Stem

One of the earliest known leaf vegetables ingested by humans, watercresses, are fast-growing, aquatic/semi-aquatic perennial plants endemic to central Asia from Europe. The plants have a spicy, acidic flavour and are part of the Family Brassicaceae, also known as the cabbage family. They are botanically related to garden cress and mustard. Like many plants in this family, watercress develops a bitter taste in its leaves once it starts to bloom. In addition to vitamins A and C, watercress also includes sizeable amounts of calcium, folic acid, and iron. It is seen as a weed in some places and an aquatic vegetable or herb in others. It is said that eating watercress has a variety of health benefits, such as functioning as a diuretic, an expectorant, a digestive aid, and a source of phytochemicals and antioxidants. It also appears to have anti-cancer effects and is widely thought to help prevent lung cancer.

A member of the Polygonaceae plant family, water-pepper or water pepper is indigenous to the temperate regions of the Northern hemisphere and grows in wet areas with shallow water. Because of its strong flavour, it has some utility as a spice. The leaves are consumed as a vegetable in Japan, however, it should be noted that these come from the cultivar and not the wild plant, which has a much stronger flavour. Wasabi is made with water-pepper seeds. In wasabi, the water-pepper seeds are utilised. 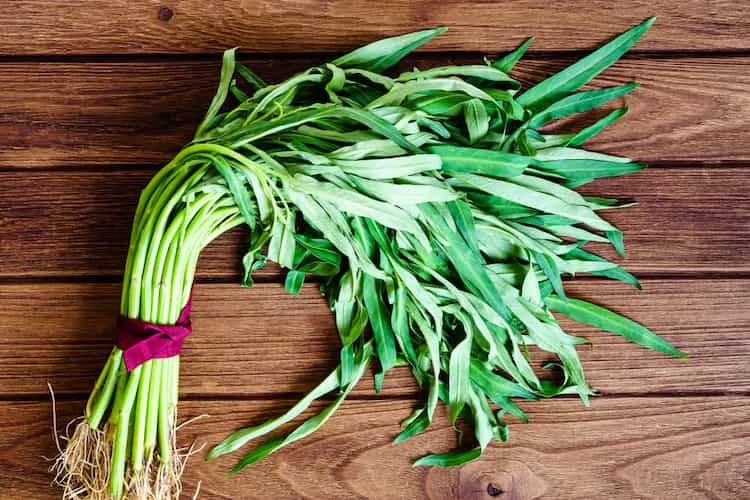 Tropical semi-aquatic plant Ipomoea aquatica is farmed for its leaves as a vegetable. Due to intensive cultivation, the species' exact native distribution is uncertain, however it can be found all throughout the tropical and subtropical parts of the world. Swamp cabbage, water convolvulus, water morning glory, kangkung, kangkong, eng chai, tangkong, kang kung, rau mung, kongxincai, home sum choy, and ong choy or tung choi are some of the more common names for this plant. These can grow on damp soil or in water. Its hollow, 2-3 m-long stems are long enough to allow them to float and root at nodes. Most often, it is grown in East and Southeast Asia. It is widely used in Malay and Chinese cuisine, especially in rural regions, due to the fact that it grows naturally in streams and doesn't need much care. Watercress, which frequently grows under comparable conditions, is frequently mistaken for it. The leaves are frequently stir-fried with chile pepper, garlic, ginger, dried shrimp paste, and other spices. The vegetable is a typical element in Southeast Asian recipes. 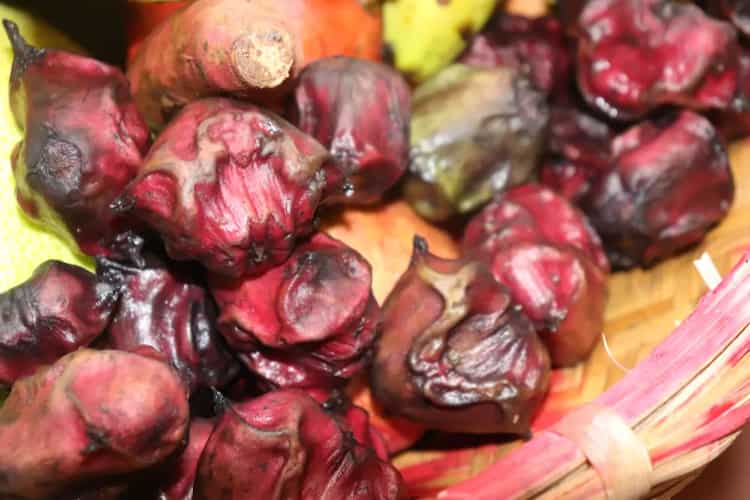 Water caltrops, sometimes known as water chestnuts, are a member of the family Trapaceae and are indigenous to Europe, Asia, and Africa. Their edible nut-like fruits are often referred to as water chestnuts. The most widespread species, the European water chestnut (Trapa natans), has floating leaves that are attached to petioles, or leafstalks, that are 5 to 10 cm (2 to 4 inches) long, as well as submerged leaves that are long, feathery, and rootlike. The fruit, which is also known as a Singhara is widely consumed in India. In the northern part of North America, the plant is regarded as an invasive species. Eleocharis dulcis, a species of the sedge family, is the Chinese water chestnut (Cyperaceae). Because of its edible corms, which continue to be crisp even after cooking, it is commonly farmed in Asia. Many Chinese recipes use it as a defining ingredient.

Wasabi belongs to the Brassicaceae family, along with mustard, horseradish, and cabbage. Its root, which is used as a spice and is referred to as "Japanese horseradish," has a very potent flavour. It produces fumes that irritate the nasal passages more so than the tongue because its heat is more akin to that of a hot mustard than the capsaicin in a chilli pepper. The plant naturally grows next to stream beds in Japan's highland river valleys. Wasabi is typically sold as a paste that is ready to use or as a root (genuine wasabi), which must be very finely grated before use. Wasabi leaves are also edible and include some of the spicy flavour of the roots. They can be quickly boiled with soy sauce to make a wasabi salad, or they can be pickled overnight in a salt-and-vinegar vinaigrette. Additionally, the leaves can be coated and deep-fried to make chips. Wasabi is frequently served with sushi or sashimi and typically has soy sauce on the side. Wasabi includes a natural chemical that can be utilised to combat specific cancer cells, according to recent studies. Oral hygiene and infections can both be treated with this unusual root. Wasabi may aid in the prevention of cardiovascular conditions like hypertension, stroke, and heart attacks. Asthma, arthritis, allergies, osteoporosis, diarrhoea, and other conditions can all be helped by the root.

This well-known decorative plant is edible and well-known for its gorgeous blossoms, which frequently have vibrant hues. You can consume numerous different kinds of water lilies in addition to regular water lilies. The American lotus, along with the yellow and white water lilies, are all edible. Freshly growing leaves and blossoming blooms can be harvested and cooked as aquatic vegetables. The seeds can be fried or baked like sunflower or pumpkin seeds because they are edible as well. The roots, which produce large, flavorful, and carb-rich tubers, can also be consumed. They can be prepared and cooked in the same manner as potatoes

Lotus is a perennial aquatic plant, but if its seeds are stored properly, they can last for a long time. Numerous common names for Nelumbo nucifera exist, such as blue lotus, Indian lotus, sacred lotus, bean of India, and sacred water-lily. All parts of the plant—flowers, seeds, young leaves, and "roots" (rhizomes)—can be eaten. The huge leaves are used as a wrap for food in Asia, whilst the petals are occasionally used as a garnish. In soups and stir-fries, the rhizome is utilised as a vegetable. Although the rhizome, leaves, and petals can all be consumed raw, it is advised that they be boiled first to reduce the danger of parasite transmission (such as Fasciolopsis buski). Chinese people have been consuming lotus roots in this way for millennia and have long recognised that they are a particularly healthful diet. Recent research has revealed that Lotus roots are very low in saturated fat and high in dietary fibre, vitamin C, potassium, thiamin, riboflavin, vitamin B6, phosphorus, copper, and manganese. The petals can be used to perfume tea leaves or dried and made into a fragrant herbal tea. The lotus seeds or nuts can be consumed raw or dried and popped like popcorn, making them highly adaptable. They can also be boiled with dried longans and rock sugar to make a tong sui, or until soft and then turned into a paste (sweet soup). Lotus seed paste transforms into sugar when combined.

How many ways can you cook lotus stem? Ask a Kashmiri

Lotus Root: A Cure To Your Digestive And Skin Problems