Beyond Chaap- Soybean Recipes That Are Worth Trying The soybean, also known as the soybean or soya bean, is a legume native to East Asia that is commonly farmed for its edible bean, which has a variety of uses. Soybeans come in approximately 2,500 different types, ranging in colour from white (the most common) to black, brown, and green. Each kind serves a distinct purpose. Green is used to produce roasted soy flour (kinako) and green tofu and natto, whereas black is boiled and consumed as part of the traditional Japanese New Year dinner. For thousands of years, soybeans have been a staple meal in many parts of the world, and over time, a range of products have been developed using soybeans, allowing them to be enjoyed in a variety of ways. Tofu, soy milk, soy sauce, tempeh, TVP (textured vegetable protein), and soy flour are some of the most common soybean products. Soybeans are used to produce vegetable oils, which are marketed to consumers or used economically in around 85 per cent of the world's soybeans. Soybeans are often sold as snacks, roasted and salted.

In India, most of the population is vegetarian and soybean is one of the richest sources of protein available to them. Soybean can be consumed in different ways be it in a liquid or a powdered form. There are various types of soybean recipes depending upon the region and local spices.

Here are a few recipes that you can try with soybean-

This is a very easy recipe. All you need to do is blend some chopped bananas with chilled soymilk. You may add some orange juice for a dash of tangy flavour. This smoothie is quite filling and tastes amazing too. You may add dry fruits, chia seeds, pumpkin seeds or any other topping to it as per your taste. Bored of the usual paneer tikka? Try the soybean kebabs that go well with evening drinks. All you have to do is substitute soybean with meat. The kebabs taste the same as chicken kebabs. You can use different kebab recipes by substituting meat with soybean and create your own versions of vegetarian galouti kebabs and shami kebabs. Soya stir fry is a smokey soya snack that gives a sweet and fiery flavour with every bite. It is an easy recipe to make. Just marinate the washed soya chunks with yoghourt and spices of your choice. Deep fry the chunks. In another pan, saute some onions and veggies. Add salt, pepper, chilli sauce and a little soy sauce. Saute the ingredients well and add the chunks to it. Stir fry the chunks for 3-4 minutes on high flame to get that smokey flavour. Your soya stir fry is ready to be eaten. Ditch the usual pulao and add some soya chunks to it. The soybean will help keep the rice a little moist and will add a little flavour to it. For all those who don't like soybean, try this recipe and I am sure you will start liking it. 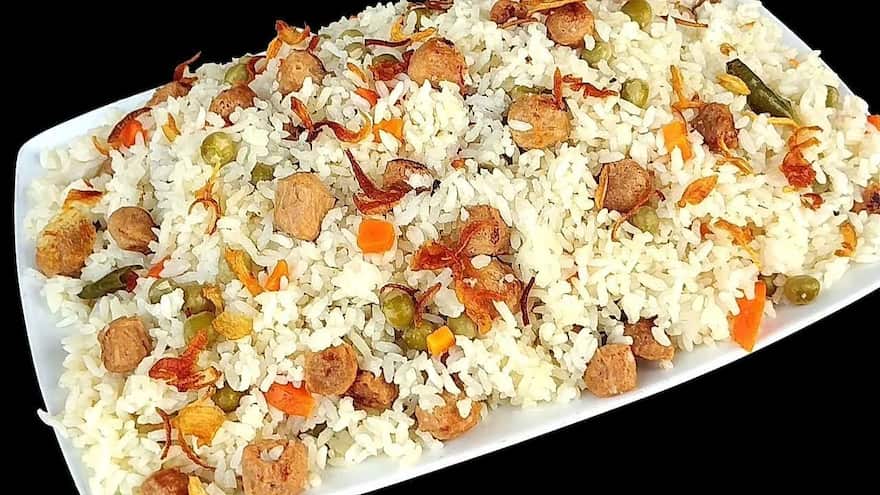 Are you bored of the usual paneer and egg bhurji? Well, try to substitute powdered soya bean with paneer/egg. The combination of onions, tomatoes and different spices mixed with soya bean powder tastes heavenly. Top the bhurji with coriander leaves and serve it with hot rotis. Try this recipe and you will instantly fall in love with this new lunch option. Time To Try These Scrumptious Soya Chunk Cutlets At Home

Soya To Corn: Delectable Kebabs To Serve This New Year

Soya Keema Snacks That Are Too Tasty To Resist