Some are rejoicing, while others fear that a new outlet will risk the heritage eatery's originality Picture this: You manage to find a table at a bustling local eatery in South Bengaluru and the waiter arrives while balancing over a dozen plates of Masala Dosa. He places one plate in front of you and moves on to the other table. Well, this has to be your first impression of the iconic Vidyarthi Bhavan! Anybody in the city would agree that this popular breakfast spot in the city is not just an eatery, it’s an emotion.

Regarded as a culinary institution at the heart of Bengaluru’s food culture, this heritage theendi place, nestled in the old market centre of Gandhi Bazaar, has been serving delicious, traditional South Indian style dosas, idli-vadas, filter kaapi and more to its loyal customers since the early 1940s. What’s making news now, however, is that the popular tiffin room is soon opening a new outlet at Malleswaram - a neighbourhood that blends the old-world charm with modern resources.

The heritage restaurant recently took to its social media pages to announce the news with a teaser-picture and a caption saying, “Stay tuned for further updates shortly!!😉 ” And ever since this update, followers and fans of this iconic restaurant have been reacting to it with ‘comments’ and ‘likes’. 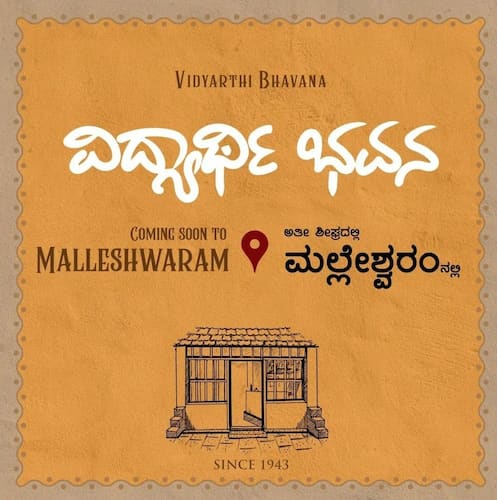 Some of the quirky responses included - “Yesterday KGF 2 and today VB 2! What an excellent week for Bengaluru 🔥😍”, says unboxingbangalore, while vilakudy says, “Finally, legendary Bangalore restaurant Vidyarthi Bhavan to open another branch. At Malleswaram!”, bangaloreepicure comments, “Can’t wait for the date 😁” and “Abba....finally!”, quips bangalore.bhumi. Some, however, also worry that the originality of the eatery will be harmed if it serves anywhere else other than Basavanagudi. “Oh no. The originality will be missed if franchise is given..”, says filmmakernaveendwarakanath, while prajwal1318 retorts,

“😮 Basavanagudi speciality gone 😮” and Suraj_Suresh16 says, “Vidyarthi Bhavan opening in Malleshwaram soon! Why? There should be only one and that's in Basavanagudi. Yaaake one more?”.

Because, Malleswaram is also home to another iconic eatery - Shri Sagar CTR (Central Tiffin Room) - which has a legacy of serving some of the most authentic south Indian breakfast items in town since the 1920s, a new Vidyarthi Bhavan outlet may at the same locality may lead to a tug of war, many fear. “Now waiting for CTR to open a branch in Gandhi bazaar and Dose verse war will be complete 😆🙏🏻” , writes director_in_me, while sameer__joshi__ says, “CTR and VB in the same area?? Yappa this is big news”.

Filled with nostalgia and sentiments, the story of Vidyarthi Bhavan is as endearing as it is intriguing. Way back in 1943, it was established by Venkataramana Ural as a small canteen exclusively for the student community. Those from the nearby National High School and Acharya Patashala often used to eat here. A native of Saligrama near Udupi, Venkataramana later handed over the ownership to his brother Parameshwara Ural. By this time, the restaurant had grown in popularity not just among students but also the general public. Their crispy, golden-brown Butter Masala Dosa is still an all-time favourite among people from all age and income groups.

The management changed again in 1970 when Ramakrishna Adiga - from Shankaranarayana, Kundapur - took over the restaurant. However, the name of the eatery, its style of cooking, the recipes as well as the staff members were retained by the new owners. In the following years, people’s love for the food served here only doubled. From the local people to celebrities and politicians alike, nobody can seem to get over the flavours and taste of Vidyarthi Bhavan’s wholesome, comfort meals. Apart from a few changes to its interiors and seating arrangements, very little has changed at this nostalgia-inducing eatery in the city. The place is currently run by Ramakrishna and his son Arun Kumar Adiga, who left his engineering job in 2005 to join the restaurant business. Up and serving at as early as 6.30 in the morning, the tiffin room is also well-known for its Rava Vada, Khara Bath, Kesari Bath, Uddina Vada, Idli and Poori Sagu among others. Symbolic of Bengaluru’s culinary history, Vidyarthi Bhavan is rightly said to be “a place where time and tradition have stood still, drawing people from all walks of life”. It will be interesting to see what the new outlet in Malleswaram will have in store!

Bengaluru's Iconic MTR Now Has An Outlet In London