Say no to caffeine. Try these amazing caffeine-free coffee and tea which are healthy and tasty. There's much debate and discussion about 'caffeine' and 'caffeine addiction'. Caffeine is a naturally occurring chemical stimulant that excites your brain and nervous system. Apart from being an adjuvant, it increases the rate at which medication is absorbed, it also acts as an antioxidant and has protective effects when consumed in moderation against several chronic diseases such as diabetes, liver diseases and most form of cancers as well as improve immune function.

However, on the downside caffeine is responsible for reducing appetite in children. In adults, it increases the risk of developing some vital nutrient deficiency like Vitamin B, minerals like calcium and iron which in a long run leads to developing osteoporosis, anaemia and gastritis. Caffeine addiction is seriously harmful to the body and one must always consume caffeine to a limit. You might want to check out some of these fantastic beverages if you're looking for a healthy alternative to tea or coffee if you're trying to avoid caffeine or simply want a different hot beverage to enjoy throughout the day. All of the options below are caffeine-free. Some can be obtained in your local grocery shop, while others can be ordered online. As you can see, there are a variety of conventional tea and coffee substitutes available, some of which may appeal to you more than others due to taste, flavour and texture. Barley coffee is a coffee substitute made from roasted, ground barley, as well as other cereal grains on occasion. While it was used by the Greeks and Romans, its more recent history is linked to the lack of actual coffee during wartime and people's need to find a suitable substitute for the thick, warming beverage. It may be especially beneficial for stomach issues. Drink with your favourite milk or milk replacement.

The roasted roots of the chicory plant, which belongs to the dandelion family, are used to make chicory root coffee. For ages, it has been used as a coffee substitute, but it has also been (and continues to be) added to coffee or coffee-alternative blends. Chicory root coffee may help with digestion, has anti-inflammatory qualities, and can help lower blood sugar levels.

The roasted and brewed seeds of the hawthorn bush, which produces vivid red berries as well as thorns, are used to make hawthorn seed coffee (the berries may also be brewed into a tea). Hawthorn is thought to be particularly beneficial to the heart, increasing circulation and lowering blood pressure.

Dandelion root coffee is a coffee replacement made from the roasted and crushed roots of the dandelion plant. Both in ground form and when blended with hot water and your choice of milk, it resembles coffee. Dandelion has long been used in traditional medicine to treat digestive problems and lower blood sugar levels. 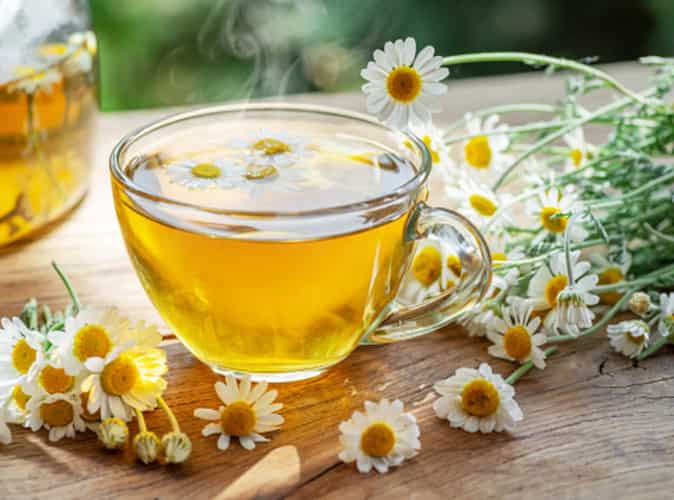 As an alternative to green or black tea, caraway tea has a number of health benefits, including the relief of gastrointestinal distress. You can buy prepared tea with carraway in the ingredient list, or make this healthy tea alternative by steeping a couple of teaspoons of caraway seeds in boiling water for several minutes.

Chamomile, often known as German chamomile, is a plant native to Southern and Eastern Europe that can be purchased in bags of pure, loose flowers that can be soaked in boiling water to extract the oil from the dried blooms. Most people are familiar with chamomile as a soothing hot beverage that can help some people relax and fall asleep, but it can also be used to soothe an upset stomach and has anti-inflammatory qualities. With a smidgeon of honey, this mild-flavoured tea can be enjoyed.

Melissa is a member of the mint family and is also known as lemon balm. Melissa contains antibacterial and anti-inflammatory characteristics, making it useful for a variety of diseases. It may also help to lessen emotional volatility. In any case, this calming herbal tea is frequently consumed when one is attempting to unwind, and a cup of this tea, like chamomile tea, can aid in the preparation of the drinker for bedtime by reducing tension and encouraging a sense of peace.

The Chamaenerion angustifolium plant, often known as fireweed or willowherb, is used to make Ivan Chai. It contains a lot of vitamin C, as well as 16 amino acids and other vitamins and minerals, all of which help with digestion, immunity, and overall well-being.

Coffee Houses To Cafes: The Best Coffee And Food In Dalhousie

The Best Cafes For A Cup Of Coffee In Srinagar