What could have been a better way to start your Monday morning than celebrating the 171st birth anniversary of the man who is regarded as the ‘Godfather Of Espresso Machines’. Google pays a coffee stain art tribute to Italian inventor Angelo Moriondo and coffee lovers around the world are rejoicing. Crafted by animator-illustrator Olivia When, the Google doodle features a GIF of the vintage espresso machine that is said to be the world’s first.

Many accounts claim that the Turin-based businessman kick-started the coffee culture way back in 1884, after he obtained the patent for the espresso machine that relied on a combination of steam and boiling water to brew coffee more efficiently. To be precise, Martina - a mechanic - was the one who developed the espresso machine under the guidance of Angelo. On May 16 that year, he was granted the licence for a ‘new steam machinery for the economic and instantaneous confection of coffee beverage method’. 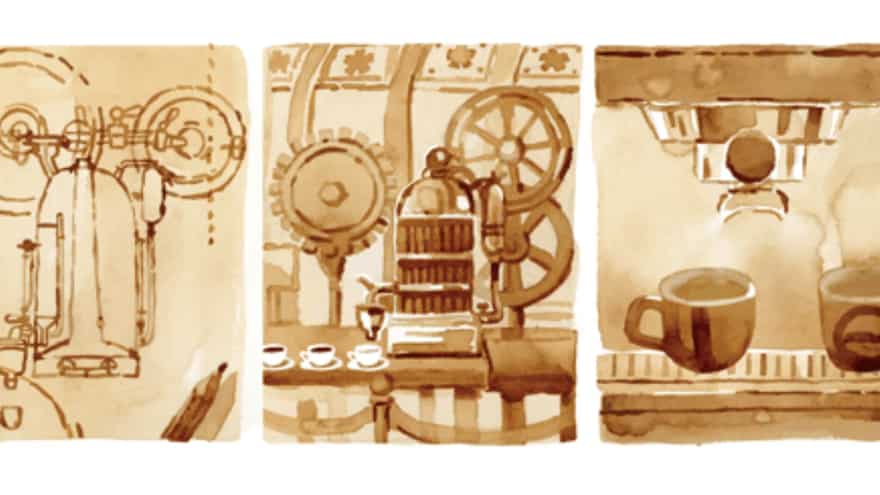 Despite the invention having the potential for a large, industrial-level production, Angelo refrained from doing so. Instead, only a few hand-built machines were created and used at his own establishments. That said, he kept making significant changes to the machine over time, with every upgrade being patented. However, this espresso machine was rather a bulk brewer than the one that could prepare coffee keeping individual choices in mind. Historian Ian Bersten later described the device as “the first Italian bar machine that controlled the supply of steam and water separately through the coffee”. He is also said to be the first historian to have discovered Angelo’s patent.

Despite Angelo’s invention eventually becoming a viral obsession, a little digging up unfolds different opinions on whether or not he should be credited as the first creator of the coffee machine. However, in a 1993 book written by Ian - titled Coffee Floats, Tea Sinks - the historian points out Angelo did invent the ‘express’ coffee machine some 17 years before Luigi Bezzerra and Desiderio Pavoni - who are regarded as important figures in the history of espresso machines.

A mechanic from Milano, Luigi, claimed the rights to an improved espresso machine in 1901, called ‘Tipo Gigante’. It consisted of a boiler and four ‘groups’ with different sized filters that contained the coffee. A family friend, Desiderio Pavoni, acquired the patent from Luigi in 1903. In 1905, he established a new company, named 'La Pavoni', and began producing espresso machines. This company also became the first one to install an espresso machine in the US in 1927. It was set up at Reggio’s in New York. It is said that the first espresso machines used to force steam through the coffee, resulting in a burnt flavour. In 1938, M Cremonesi - a technician at a coffee-grinding unit in Milan - built a piston pump that forced hot, but not boiling, water through the coffee, rendering a more natural taste to the coffee. It also managed to leave a layer of foam on top, which is now a major characteristic feature of every coffee mug. Achille Gaggia’s coffee bar was the first place to install the device. After World War II, Gaggia started commercial production of the piston machines.

It was only in the 1950s that espresso gained steam in the UK. People in the country, mostly the young crowd, favoured cappuccino as well as the standard form. Meanwhile, lattes became popular in the US.

Know Your Coffee: From Cappuccino, Latte To Americano; Here’s The Difference

4 Most Expensive Coffee Around The World

The Origin Of The Popular Dalgona Coffee