Are You Worth Your Posto?

The tiny, white poppy seed - a humble residual of the poppy plant, but an integral ingredient of Bengali and other Indian cuisines - comes with a huge price tag, both physically and metaphorically Every Bengali and, for that matter, every eastern Indian loves his or her ‘posto’ or poppy seed, in its myriad culinary forms. It is their comfort food at its best. Be it the ubiquitous Aloo Posto or its variant Jhinge (ridge gourd) Aloo Posto, (potato cooked in mustard oil and with a seasoning of nigella seeds and poppy seed paste), Kaancha Posto Bata, (poppy seed paste spiked with a dash of mustard oil, green chillies, and onions, etc.), Deem (egg) or Murgi (chicken) Posto, Posto Bora (fritters made using posto paste), give Bengalis their posto and gorom bhat and they are sorted.

Just to give you an idea as to how posto is an inherent part of every Bengali’s DNA, I have two disparate examples across the spectrum. One is, Bengali bombshell Bipasha Basu naming her (late) pet chihuahua Posto, and the second is celebrated author Amitav Ghosh beginning his Ibis trilogy with his book, the Sea of Poppies. The vivid crimson poppy flower (depicted on the cover of Ghosh’s first edition of the book) was also used as a motif in block printing Indian textiles during the Mughal era.

Posto, known as Posta Dana or Khus Khus in Uttar Pradesh (UP), Madhya Pradesh (MP), and Bihar, and Gasagasalu in Telangana, and by similar names across other states, is used in Indian cuisines other than Bengali dishes too. Khus khus was used early enough by the khansaamas (cooks) of Mughal emperors in North India, specifically Lucknow, as a thickening agent in rich Mughlai gravies and curries, the Kormas and Qalias like Mutton Korma, Rezala, Chaap, Raan Musallam and to add to their depth and texture. 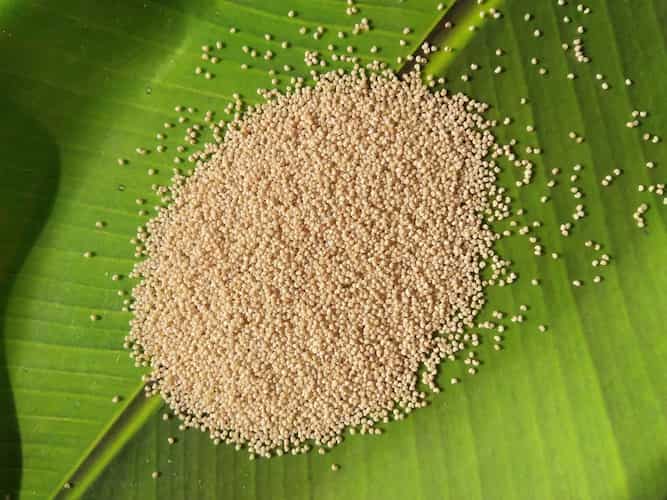 It is also used extensively in Hyderabadi cuisine, where it is used in making a creamy Dum ka Murgh or a Mirchi ka Salan, without which no Hyderabadi Kacche Gosht Biryani is considered a complete meal. Poppy seed is also used in Mediterranean and European cuisines, in the case of the latter, more specifically in Russian and Czech confectioneries.

Makovnik, a traditional cake baked during Easter, uses copious amounts of poppy seed (in fact it is referred to as a poppy seed cake) and Bubliki, a kind of bagel topped liberally with poppy seeds are two unique Russian confectioneries using poppy seeds.

However, it is on the banned list of foods in countries like UAE, Saudi Arabia, Taiwan, and Singapore, as it is considered a drug-like substance despite the known fact that poppy seeds by itself does not contain the drug codeine.  Posto, for those not in the know, is a residual by-product of the opium poppy plant Papaver Somniferum. Once the drug or opium is extracted from the latex of the poppy seed pods, the tiny white non-narcotic seeds left behind, are posto or khus khus seeds. Known for their nutty and neutral taste palate, poppy seeds are high in antioxidants and are an excellent source of minerals like calcium, potassium, magnesium, and even iron. It is also known for its ailing properties for digestive issues and regulating body temperature. Mughal emperors like Humayun chanced upon it being used as a recreational drug in the 16th Century, and the Nawabs were quite smitten with its stupor-inducing abilities. Poppy also finds a reference in the Dhanwantari Nirghanta, revered as one of the oldest Indian medicinal texts.

Poppy seed cultivation for opium was started by the Mughal emperors in western India in the early 15th Century as a trade item with China. Many years later, with the British East India Company having established its presence in eastern India, the Britishers decided to shift opium or poppy cultivation to the more fertile province (which is the current Bengal, Bihar, and Odisha) than Western India and started trading in opium to China from India.

When opium was banned in China, the British started smuggling it into the country at huge profits and when the Chinese Emperor tried to resist it, the British army fought two bloodied and bitter Opium Wars in 1840s and 1850s, which spelt defeat and a huge death toll for China as well as some humiliating trade and treaties. This forms the backdrop of Ghosh’s book, where he outlines through the protagonist Deeti, a woman from Bihar a story of cruel exploitation, by which farmers were oppressed to convert all their land holdings to opium seed cultivation. In his book Opium, co-authored by DJ Triggle, renowned academician Thomas M Santella writes that Bengal was the capital of opium production by the end of the 18th Century. Opium fields covered nearly 5,00,000 acres of prime land, employing 1.5 million small-farmer households across Bengal and Bihar — the main areas under opium cultivation in colonial India. They grew the highly labour-intensive crop on their fields and delivered humongous quantities of opium to the British-controlled processing factories in Patna and Benares.

In fact, posto seed was ignored as a waste by-product of the opium cultivation process until hunger and the lack of any other food crops or vegetables forced resourceful Bengali housewives to use the mounds of unused poppy seeds dumped as trash outside the processing factories, and make a meal out of it. In the rural Bengal of the 18th and 19th Centuries, and the early 20th Century, poppy seeds were eaten as a raw paste with liberal amounts of mustard oil along with panta bhaat or fermented and soaked leftover rice.

Today, ironically, opium poppy is not cultivated in West Bengal, though it is grown under government supervision and with licensing issued by the Central Bureau of Narcotics jurisdiction in MP, Rajasthan, and UP. However, it is on the banned list of foods in countries like UAE, Saudi Arabia, Taiwan, and Singapore as it is considered a drug-like substance.

Of late, however, posto is getting to be a rare sight on a Bengali meal for its exponentially high prices, the reasons of which are not much known, except the infrastructural constraints of imports is how a government official friend explained it. Most of the poppy seed consumed as food (not narcotics or medicinal, that is) is imported from Turkey and the Czech Republic.

The other day I read a media report with a catchy headline about how posto is now quoting at pista prices, and I was struck by its bizarreness, that an erstwhile humble ingredient (albeit, extracting huge human losses in the past) could be as expensive as an exotic dry fruit, which is still largely imported due to the non-suitability of climates.

With posto prices quoting at ₹2,500 to ₹3,000 a kg, even restaurateurs are wondering if their menus should feature Aloo Posto as commonly as before. But they are hesitant to hike prices of the dish, as it is considered such a common dish. It remains to be seen, therefore, if the humble poppy seed continues to hold its own, against inflation.

About Author: Swati Sucharita is a Hyderabad-based journalist, food blogger and independent content consultant. You may write in at swati.sucharita@htmedialabs.com.

Beyond ‘Aloo Posto’: 5 Types Of Bengali 'Posto' You Can Make At Home