Her all-natural platter also featured a host of indulgent curries. Anushka Sharma is one actor who doesn't shy away from showing her unabashed, unfiltered self on social media. And when it comes to food, we definitely know Anushka loves to devour. And not just any particular kind, Anushka is a hardcore foodie who likes to experiment with different cuisines. While on one occasion she noshed upon south Indian treats like podi dosa with coconut chutney, making us hungry, in her latest Instagram story she was spotted enjoying an authentic Maharashtrian thali served in the traditional way, on a banana leaf. On Sunday, Anushka shared a photo on Instagram Stories where we can see varan bhaat (dal and rice) with oodles of of toop (ghee) and masala bhaat (rice dish) cooked in a range of spices and vegetables like green peas. Her all-natural platter also featured a host of indulgent curries , loncha and what looks like arbi ke patte ke pakode. "Time for food” a sticker on the post read. Take a look: 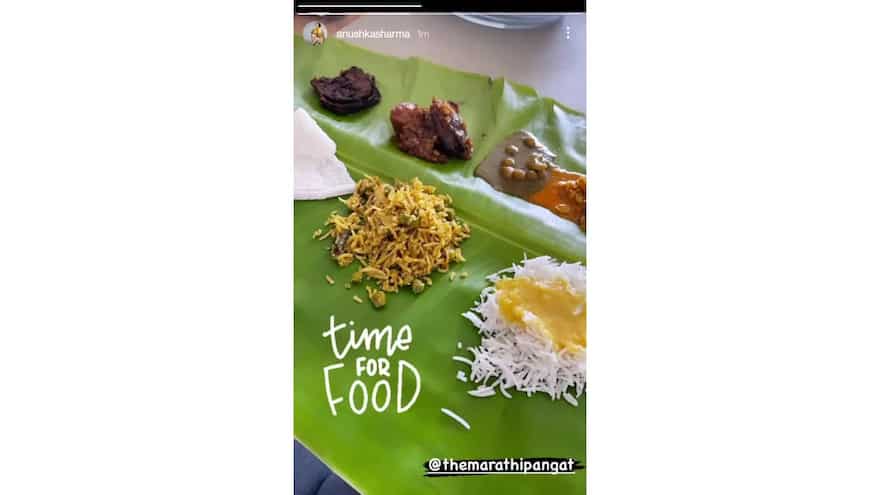 Looks wholesome, doesn’t it? A traditional Maharashtrian thaIi is perhaps a great lunch idea. For those who aren’t known to the regional cuisine, Varan bhaat is a traditional Maharashtrian dish that is served at numerous festive and important events such as Ganesh Chaturthi and Gudi Padwa. You can easily try it at home with this recipe. Another amazing dish from the thali is masala bhaat, a one-pot rice meal that is staple in a Maharashtrian home.

We love Anushka Sharma’s interesting food diaries, as it often promotes regional, simple, natural food. A while ago she had also shared a jam-making video on Instagram, revealing that it was shot during the lockdown in 2020. The video shows Anushka making the jam from scratch. She first goes into her kitchen garden to harvest fresh tomatoes for the jam, she returns with the basket of tomatoes and washes them under a tap. The tomatoes are then sliced, blanched, and placed in ice water. After dicing and peeling the tomatoes, she starts to cook them in a pan. Then she adds sugar, salt, and other spices, as well as lemon juice. In the end, she is seen enjoying the homemade jam on a bread slice with her family. Take a look at the video here:

On another occasion, Anushka Sharma also savoured a full-fledged sadhya-style meal served on a banana leaf. The actress enjoyed a plateful of Thattu dosa along with a delectable banana flower curry. Anushka captioned the image, “Delicious”.

With so much Indian regional delicacies on her list, we can’t wait to see Anushka’s next gastronomic adventure. What about you?

5 Iconic Maharashtrian Desserts You Must Dig Into