Ale and lager are two very popular types of beer. To avoid any confusion, let's take a look at some of the factors that make them different to each other. There are no two words that are flung around as often as "ale" and "lager" when it comes to talking about beer. This isn't surprising because all kinds of beer fall into at least one of these categories, but many of us have been misled when it comes to differentiating the two. When you ask most beer connoisseurs what the difference between ale and lager is, they'll tell you it's all about the yeast. Though this statement appears to be true, it is actually a little more complex than that. Many beer fans are aware that ale uses top-fermenting yeast whereas lager uses a bottom-fermenting yeast. While both of these variations disseminate throughout the fermentation vessel while brewing is in progress, they will be more noticeable at the top or bottom during specific stages of the fermentation process.

Let’s take a further dive into this.

Saccharomyces cerevisiae, a popular yeast used in a variety of applications, including wine and bread manufacturing, is used to ferment ale. It's a resilient cultivar that adapts to changing conditions better. Whether it's a larger temperature range, higher alcohol level, or a variety of other factors. It's the original civilization's yeast, and it's been discovered all across the world, including Antarctica.

Because it rises to the top of the brewing vessel before dropping to the bottom as fermentation occurs, it's called a top-fermenting yeast. This property also makes it very simple to harvest the yeast without interfering with the fermentation process. This would make it simple to employ the extra yeast at the top of the vessel for leavening bread in ancient societies where bread production would happen simultaneously with the brewing business. Because of the rapid action of this yeast species, the ale can be brewed in as little as a week, with yeast products floating to the surface due to enhanced movement within the fermentation vessel. Saccharomyces uvarum, is used to ferment lager. This yeast isn't so much bottom-fermenting as it isn't rising to the top like an ale yeast before sinking to the bottom as the fermentation progresses. Because the yeast didn't appear at the top of the fermentation jar, it was most likely considered that it was bottom-fermenting, as early fermentation containers were composed of materials that made it impossible to view the bottom. It is a lot more delicate yeast than ale yeast, requiring more particular conditions to grow.

Because the yeast is fragile, it cannot sporulate (form a cyst of a few cells with a protective wall) at low temperatures, allowing it to remain active at temperatures below 39°F. It also takes longer for sugars to break, slowing down the brewing process. It has a lower tolerance for alcohol and is capable of fermenting mebilose, a sugar that top-fermenting yeasts cannot. These three traits enable more sugar to remain in the beer, resulting in a smoother, sweeter product. 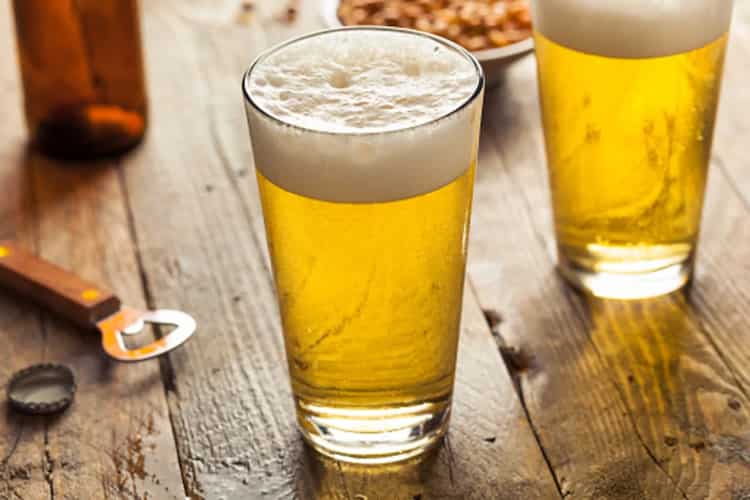 Top-brewing ales are brewed at higher temperatures, usually between 60 and 80 degrees Fahrenheit, with some odd kinds reaching as high as 95 degrees Fahrenheit. As a result of the enhanced chemical activity at higher temperatures, ales are often brewed in these ranges to speed up the fermentation process. However, without filtering, this rapid fermentation process results in a cloudier, harder beer, which some may find unpleasant.

The cold-hardiness of lager, on the other hand, permits it to function at significantly lower temperatures. Winter temperatures in Germany, Bavaria, and other parts of central Europe allowed this type of yeast to develop popularity among brewers, especially after Duke Albrecht V of Bavaria decreed in 1553 that no brewing be done during the summer. At the same time, the reduced temperature causes fermentation to take half as long, slowing the process and resulting in a clearer brew.

Lagers also go through a cold conditioning stage that ales don't, which helps them develop even more clarity. The variety's name comes from the German word lagern, which means "to store." Traditionally made in caves throughout central Europe, the chilly temperatures allowed the beer to be preserved at a cooler temperature for longer periods of time than ale, which is stored at a warmer temperature in other regions of the world. This would have a significant impact on the final product, giving lagers a clearer appearance and finer flavour than ales of the same period.

Though it is thought that this trait was discovered by accident when lager housed in brewing caves was left longer than intended, it is today a nearly mandatory phase in the brewing of lagers, consisting of a four to ten-week period of cold conditioning.

This process allowed more yeast, proteins, and hops to settle out of the lager, greatly enhancing clarity and lowering chill haze, which occurs when an ale that has not gone through the cold treatment phase is cooled for the first time and the additional solids in the brew generate the haze effect.

The yeast, regardless of the style of beer, has a direct impact on the overall alcohol content, which is our second area of concern. Ale yeast is significantly more hardy in higher-alcohol settings, thus it will survive at larger amounts of alcohol, resulting in ales with higher alcohol content in general.

Though hops are found in practically every beer variety, they are used in various amounts in ales and lagers. The finer qualities of the hops are able to come out during the cold treatment process in lagers, creating a more delicate flavour without sacrificing the hops' ability to add to the finished beer.

Hops, on the other hand, are present in considerably higher concentrations in ales, owing to the fact that hops act as a protective ingredient for the beer as it ferments at higher temperatures.

However, because ale is produced faster and at a higher temperature, there may be more bitterness in the finished product, which can be a disadvantage or a benefit depending on your particular preferences and the style being brewed.

Try These Indian Beers For A Refreshing Change