Spiced with curry powder and flavoured with coconut, this dish from Somalia feels close to home The pandemic could have been a time when home cooks grabbed every available chef’s cookbook in an effort to recreate their favorite dishes from dining rooms that were mostly shuttered. Indeed, several knockout chef- and restaurant-driven books have been released over the past year, including Jonathan Waxman’s The Barbuto Cookbook and Chasing Flavor by Dan Kluger.

But clearly, this is a moment that demands comfort, and that kind of cooking is best left to a parent—or better yet, a grandparent. For that, we have In Bibi’s Kitchen: The Recipes and Stories of Grandmother’s from the Eight African Countries that Touch the Indian Ocean, by Hawa Hassan with Julia Turshen (Penguin Random House; $35).

Hassan, who is based in Brooklyn, N.Y., is the owner of Basbaas Foods, which specializes in condiments from her native Somalia. At the age of four, Hassan and her mother were relocated to a refugee camp in Nairobi; she then went alone to Seattle and was separated from her mother for 15 years. She wrote the cookbook as a way to reconnect to her family and identity.

“When I was doing research for the cookbook, I realized that food from Africa was pretty much a blank slate,” says Hassan via phone. “I saw it as an opportunity to talk about the different foods on the continent, which people aren’t aware of.”

Bibi means grandmother in Swahili. Among the 75 recipes in Hassan’s book are 24 from grandmothers, including Ma Jeanne’s braised oxtails from Madagascar and Ma Josefina’s plantains with coconut and shrimp from Mozambique. Each chapter delivers information about the eight African regions, from economy to resources, as well as conversations with the esteemed recipe providers. 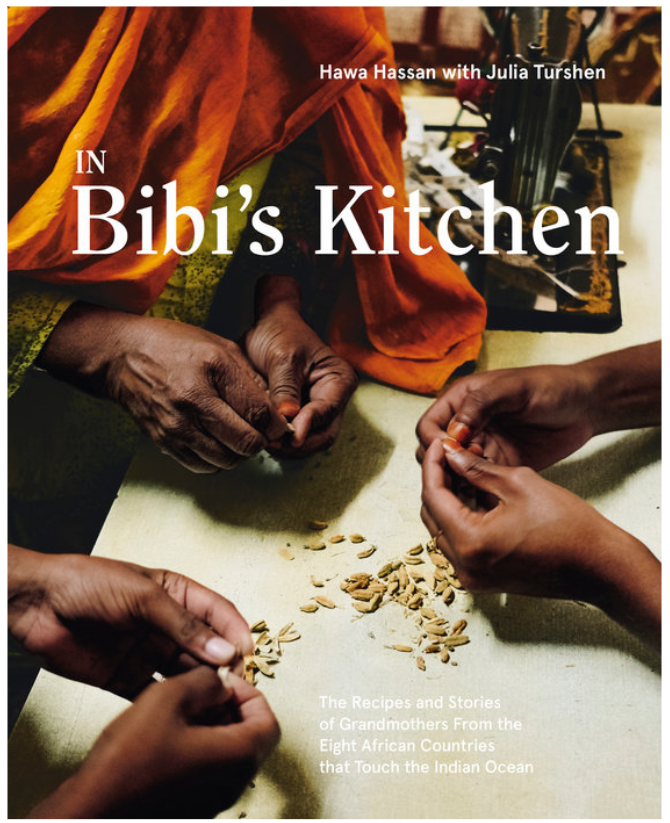 In Bibi’s Kitchen: The Recipes and Stories of Grandmother’s from the Eight African Countries that Touch the Indian Ocean, by Hawa Hassan with Julia Turshen (Penguin Random House).

A remarkable digaag qumbe, or chicken stew with yogurt and coconut, is based on a recipe from Hassan’s family. “All the women in my family make it,” she says. Her mother and siblings are in Oslo, and “sometimes they make it when we’re FaceTiming,” she says. Although everyone applies some personal preferences, Hassan’s mother now uses Hawa’s recipe.

The straightforward-sounding dish offers an incredible depth of flavor, given how easy it is to make. Her hack is to make a puree of tomatoes, yogurt, and fragrant spices that in the pot at the beginning, rather than the end, to make a sauce into which chunks of chicken and potato and carrot are then added to simmer. Warm, generous flavors of ginger and chile, along with creamy coconut milk, suffuse the meat and vegetables. The dish is far more than the sum of its parts.

Hassan serves it with bananas alongside, “for the most authentic Somali experience.” In the book, she writes: “the combination is not well known in the United States, but you can help it become known—it’s great.”

Another, all-important reason to make Hassan’s dish is to get to know a cuisine you almost certainly aren’t familiar with. “It’s warming and earthy and introduces people to new flavor combinations they don’t quite know.” Hassan adds. “This is an easy way to expand pantries—and minds.”

Later this year, Hassan plans to expand Basbaas to include snack foods that highlight African grains. She’s already started to work on her next book, loosely based on civil war, displacement, and cooking. “It’s the time when people are all ears, and one of the good ways to tell your story is through food.”

The following recipe is adapted from In Bibi’s Kitchen, by Hawa Hassan. In the book’s recipe, Hassan uses a “Xawaash Spice Mix” made with freshly toasted and ground spices; this version substitutes store-bought spices.

Cooked rice and bananas, for serving

Warm the oil in a large Dutch oven or other heavy pot set over medium heat. Add the onion, garlic, and ginger, and cook, stirring occasionally, until just beginning to soften, about 5 minutes. Stir in the blended tomato mixture, bring the mixture to a boil, then immediately lower the heat, cover, and cook until very fragrant, about 10 minutes. This initial cooking forms the base of the sauce.

Stir in the potato, carrots, chicken, and coconut milk. Cover the pot and cook, uncovering to stir occasionally, until the vegetables are tender and the chicken is cooked through, about 30 minutes.

Season the stew to taste with salt. Serve hot, sprinkled with the cilantro, over cooked rice, and with bananas alongside. (Don’t slice the bananas; just serve them whole and take bites as you devour the stew).