5 Must Try Maharashtrian Dishes For Dinner

Maharashtrian cuisine is an interesting fusion of regional culinary techniques and Desi masalas, using some of the most basic ingredients. Maharashtrian or Marathi cuisine hails from the state of Maharashtra. Despite having many similarities to other Indian cuisines, it has unique characteristics. Maharashtrians have traditionally regarded their cuisine as being more austere than others. There are both mild and spicy dishes in Maharashtrian cuisine. Dietary staples include wheat, rice, jowar, bajri, vegetables, lentils, and fruit. Vegetables are frequently served with peanuts and cashews. Each one of them, from misal pav to aamti to bhelpuri, is a gem. Maharashtrian cuisine is an interesting fusion of regional culinary techniques and Desi masalas, using some of the most basic ingredients. It's intriguing to watch how different parts of the state prepare their own distinctive takes on classic dishes. Kolhapur region is famous for authentic white and red mutton curries and its unique green chile chutney. Rice, mangoes, cashew nuts, and coconut milk are all frequently used in Konkani cuisine. Another common ingredient found in the majority of Maharashtrian dishes is kokum, which is frequently substituted for tamarind. You may enjoy a combination of traditional Maharashtrian cuisine and Mughlai flavours in Aurangabad.

Here are some Maharashtrian dishes that you may try for dinner-

Let's start with Puran Poli, a type of sweet flatbread that is a staple of Maharashtra cuisine. It is made by stuffing a flatbread made of wheat flour with chana, desiccated coconut, jaggery or cane sugar, and nutmeg powder.  Puran Poli is made especially for Ganesh Chaturthi and other festive festivals like Diwali, enhancing the festive atmosphere.

Bombil fry is Maharashtra's shallow fried seafood dish. Semolina and rice flour are used to shallow fry this fish, giving it a crisp exterior and a soft, buttery interior. One of the most popular dishes on the menu of any seafood restaurant is the flavorful Bombil Fry. Due to its presence in and around the waterways of Bombay, Bombil is also known as Bombay Duck. Kolhapuri food is famous for being spicy and flavorful. The freshly ground spices and grated coconut give the dish its distinctive flavour.  Kolhapuri chicken is made by marinating and frying the chicken with bay leaf, cinnamon, cloves, black pepper, and crushed paste. Kolhapuri masala is the key ingredient in this dish that gives it a unique fiery flavour.

Misal pav is one of the most well-known Maharashtrian dishes, sometimes referred to as the state's "lord of street food." It is made of Pav, an Indian bread roll, and Misal, a hot dish cooked with mutton beans. The dish is topped with various Indian snacks, like farsan, sev, and aloo laccha. In addition to these, it is garnished with lemon and coriander leaves and offered with a glass of buttermilk.

Malvani style chicken curry is a spicy and flavorful chicken dish from the Malvan district of coastal Maharashtra. A spicy, fragrant handmade Malvani masala and a lot of coconuts are used to make an authentic malvani chicken curry. The Malvani masala is made with mace, nutmeg, a dash of hing, desiccated coconut, and a tonne of dried red chillies. 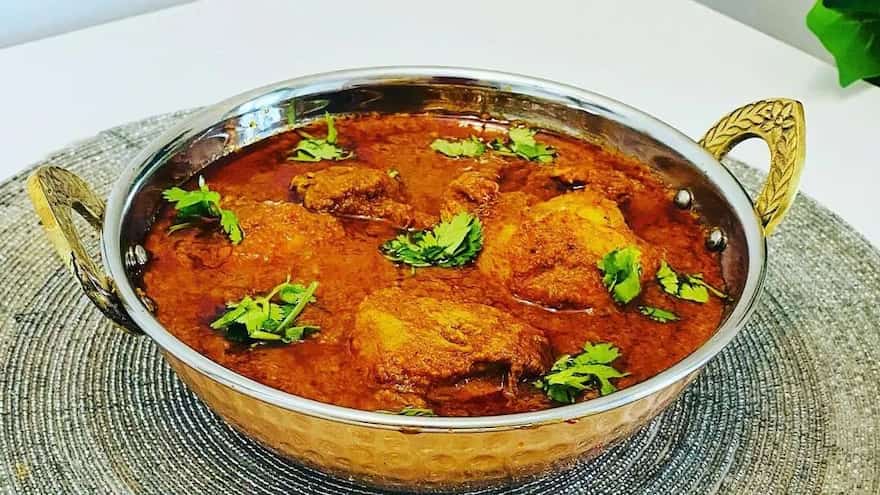 Comfort Foods Of India: How To Make Maharashtrian Masala Bhaat

Kharvas: You Can't Guess What This Maharashtrian Dessert Is Made Of

Roopa Nabar On Her Cookbook, Maharashtrian Kitchens And More