Gujarat is a dry state and most of the people in the region are vegetarian. Only those belonging to the coastal Kharwa, Koli, and Macchiayara communities along with Gujarati Muslims, and the Catholic population indulge in non-vegetarian foods. Bollywood has portrayed a much-screwed picture of what Gujarati cuisine looks like. Well, it is not only limited to khakhra, thepla, dhokla, and khichdi, as they say. There is a lot more to this, which is difficult to see through the glamour-tinted glasses of Indian films. Here, we will take you on the journey of the Gujarati culinary world that’s known for its delectable dishes. Like other cuisines, the Gujarati style of food preparation is also quite influenced by the state’s history, culture, and geography. Gujarat has a rich history that dates back to the Indus Valley Civilisation. It is nestled on the west coast of India near the Arabian Sea. Gujarat has had under the rules of various rulers from Mughal, Maratha, Rajput, and Islamic dynasties. That’s why you would witness an influence of these dynasty’s culinary habits in Gujarati cuisine. It is an amalgamation of distinct flavours of all the regions (like Surat, Kathiyawad, Amdavad etc.) that come under the state of Gujarat.

Gujarat is a dry state and most of the people in the region are vegetarian. Only those belonging to the coastal Kharwa, Koli, and Macchiayara communities along with Gujarati Muslims, and the Catholic population indulge in non-vegetarian foods. That’s why anything that comes under non-vegetarian food is not typically included in Gujarati cuisine. There are basically four pillars of Gujarati food culture. Let’s explore them one by one. 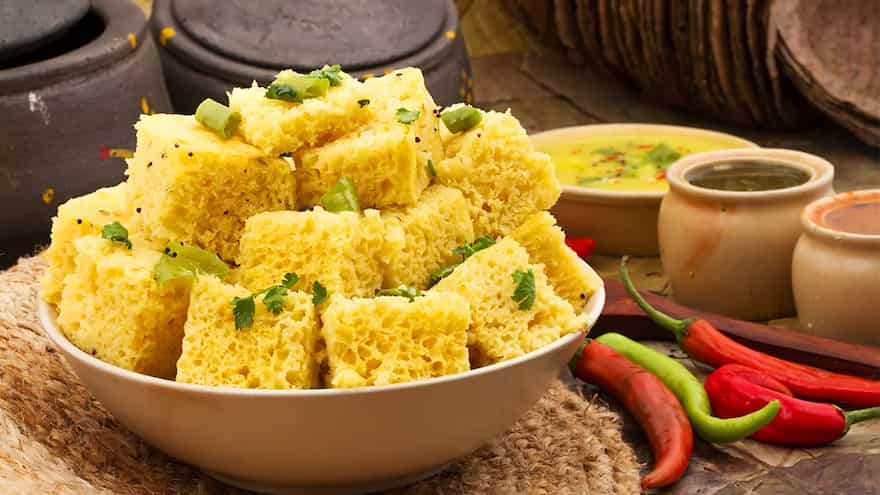 Major cities including Bhavnagar, Rajkot, Porbandar, Jamnagar and Junagadh fall under the Kathiyawadi region where people prefer spicy over sweet. Nestled in close proximity to Rajasthan, Kathiyawadi cuisine is deeply influenced by Rajasthani cooking. Highlights of this region’s cuisine include sev tameta nu shaak (a curry dish made of tomatoes, chilli, and sev), ringna no oroh (roasted eggplant), etc. The latter is similar to what we north Indians call baingan ka bharta.

One of the most prominent Surti dishes is undhiyu ( amixed vegetable dish). The word 'undhiyu' means 'upside-down.' Thinking what’s the point or purpose of this name? Well, the dish got its name owing to the way it is prepared. To make undhiyu, you basically need to toss the ingredients (Indian flat beans, pigeon peas, eggplant, potatoes, bananas, purple yam etc.) along with spices in an earthen pot. It is then covered and buried in the muddy ground surrounded by coal. Slow cooking is what brings such delectable flavor to this seasonal dish.

Another Surti specialty is locho, which is a street food made by mixing steamed gram-flour-based cake with garlic, chilli, and ginger and then served with chutneys. While talking about Surti cuisine, how can we miss dessert? One of the most popular sweet dishes in this region is ghaari which requires oodles of dry fruits, mawa and sugar. In the end, the dish is submerged completely in ghee. It is a massive hit in Surat.

People in Ahmedabad are big foodies. The city is the hotspot of delightful street foods. Stroll through the roads of Ahmedabad and you will see multiple street food stalls selling mouth-watering snacks. If you happen to come to the place during summers, you will easily find people relishing snow cones dipped in syrups almost everywhere. Jalebi is one of the most favourite delicacies of Ahmedabad. A rice-based dish called Amdavadi pulao, a light snack called dhokla, and a similar food called khandvi are also popular amongst the people of Ahmedabad.

The dry and arid region of Kutch is known for its delicious street food known as dabeli. A traditionally made dabeli is relished with garlic-based chutney. The dish is prepared by stuffing a mix of mashed potatoes, jaggery, masala, date, and tamarind in a bread roll and then pan-roasting it. In the end, the food is topped with spicy peanuts, onion, sev, and pomegranate seeds.

Bajra na rotla made with pearl millets and served with curd or garlic chutney is another popular dish of Kutchi cuisine. Khaja, a sweet dish that can be easily found in Bihar and some parts of UP is also a favourite of people living in the Kutch region. Cooking in the Kutch region basically demonstrates what creating out of nothing means.

4 Gujarati Curry Recipes To Try For Your Next Meal