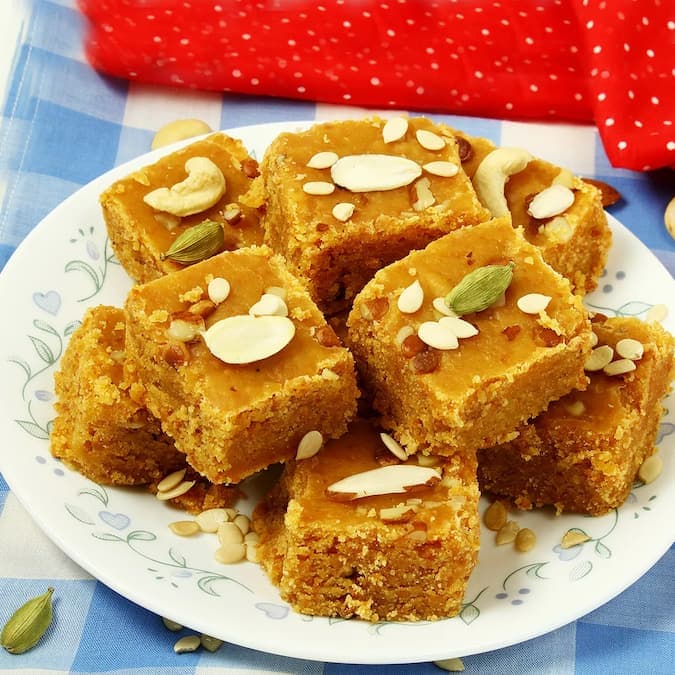 A traditional rich Gujarati sweet made from besan (gram flour) cooked in ghee, sugar and milk flavoured with cardamom and nuts and set. a exotic gram flour fudge or dessert from the traditional ancient gujarati and rajasthani cuisine. this besan and ghee based indian sweet dessert is popularly known as mohanthal, but it is known with other names like, mohanthar or mohan thal too. yet another traditional indian sweet recipe with the combination of besan flour, ghee and sugar. it has a significance resemblance to the south indian mysore pak and also besan burfi, but still differs with the way it is prepared and texture.

Once the flour has absorbed all the ghee, add ¼ cup milk . Continue to mix with fingers till the gram flour absorbs all the milk and the texture is wet but still has a big crumb-like.

The mixture should not be kneaded to form a dough, it should be mixed with fingers. Once all the milk is absorbed , rest the mixture for 15 to 30 minutes.

In a heavy bottom pan add the remaining ½ cup of ghee and allow it to melt completely.

After approximately 10 minutes of stirring on medium heat, the gram flour mixture will have absorbed all the ghee and will have a crumble texture.

Next pour in the sugar syrup. Stir continuously till the mixture thickens and is slightly dry. The gram flour will absorb all the sugar syrup and thicken. When scooped in the ladle it sticks to the ladle and will not fall back or pour into the pan.

The mohanthal is ready to be set. Take a large square glass bowl and empty the mohanthal from the saucepan into the dish. Spread it out evenly and tap it down so that it is compact.