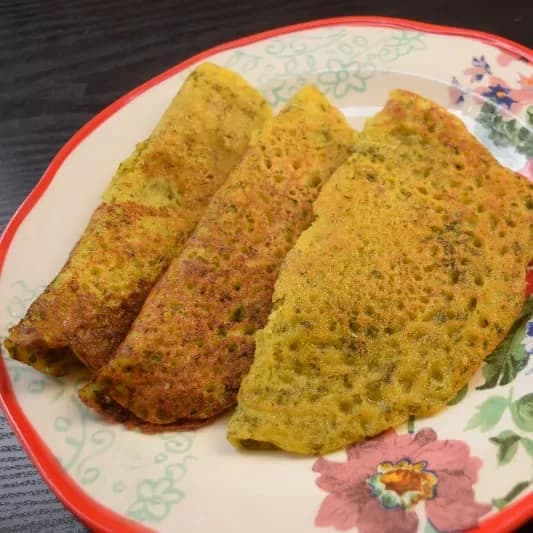 Rava dosa is a popular south indian snacks. Unlike many other south indian dosas like masala dosa and plain dosa, the rava dosa does not require any fermentation and can be prepared in under 30 minutes . Rava dosa is generally made from rava (semolina), onions, chopped vegetables like carrot, capsicum, ginger and little amount of spices . There are many variations to rava dosa. Here i have tried to recreate the traditional south indian snack and used coriander leaves as the dominant ingredient in the rava dosa. I have named this dish as instant kothimbir dosa. Kothimbir means coriander in maharashtra and north karnataka regions. I have used equal proportion of rava and coriander leaves. The combination of spices like black pepper, garam masala, red chilly powder, turmeric and black salt with the freshness of coriander leaves makes this dish delectable. This is a pure veg satvik dish and can be had in fast. There is no onion and garlic in this dish. You can cook this dosa both sided thoroughly or cook only one side by covering the pan with the lid. In this recipe, i have used lid to cook since it speeds up the cooking process and reduces the cooking time.