Chinese dumplings are a universe unto themselves, and it can be difficult for Westerners to navigate because so many different types of dumplings have different names—Szechuan, Cantonese, and pinyin or romanized. Chinese dumplings are a universe unto themselves, and it can be difficult for Westerners to navigate because so many different types of dumplings have different names—Szechuan, Cantonese, and pinyin or romanized. To add to the confusion, each name can have multiple spellings. However, there are two types of Chinese dumplings: gao (crescent-shaped dumplings) and bao (round, purse-shaped dumplings). There are practically limitless variations within these categories, depending on the type of wrapper (wheat and rice being the most prevalent), the type of filling, and whether the dumpling is boiled, steamed, or fried.

The following is a list of the most common types of Chinese dumplings.

The most prevalent type of Chinese dumpling is jiaozi (pronounced "jow-zee"). Jiaozi are crescent-shaped wrappers made of wheat dough that are filled with minced pork, cabbage, and scallions and served with a dipping sauce composed of soy sauce, vinegar, and sesame oil. Jiaozi is a generic term for this sort of dumpling, however, it may also be referred to as shui jiao if boiled, zheng jiao if steamed, and guo tie or jian jiao if pan-fried. The term "potstickers" is widely used to describe them. Har gao (pronounced "ha-gow") is a steamed oval or crescent-shaped dumpling cooked with a transparent wrapper of wheat and tapioca starch and filled with shrimp, pork fat, and bamboo shoots. Har gao wrappers are typically fashioned with seven to ten pleats on the exterior, and the wrapper's starch blend is designed to produce a smooth and tender, yet elastic consistency. The pork fat liquefies when steamed, giving the dumpling a hard (the shrimp should be cooked through without becoming tough or rubbery), yet juicy bite. 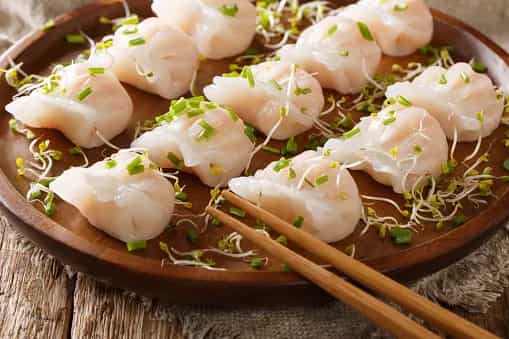 Xiao long bao, often known as "soup dumplings," are a round, purse-shaped dumpling composed of a moderately thick (thicker and doughier than jiaozi, for example) wheat wrapper that is crimped on top. Although they are called soup dumplings, xiao long bao are not filled with soup. Rather, they're stuffed with chopped cooked pork (and occasionally crab) and plenty of collagen-rich pork trimmings. When steamed, the collagen melts and transforms into liquefied gelatin, resulting in an incredibly rich and flavorful broth. Xiao long bao, like har gao and siu mai, are frequently served as part of a typical Chinese dim sum brunch. Siu mai (pronounced "shoo-my") is a round basket-shaped dumpling with an open top prepared with a thin wrapping of wheat dough. Variations of siu mai vary throughout China and other parts of Asia, as they do with most Chinese dumpling forms. Traditional Cantonese siu mai, on the other hand, are filled with ground pork and shrimp, as well as mushrooms, ginger, and green onions.

Siu mai are typically topped with an orange dot of fish roe or carrot (or occasionally a green dot created from a single pea) and steamed in a bamboo steamer basket. 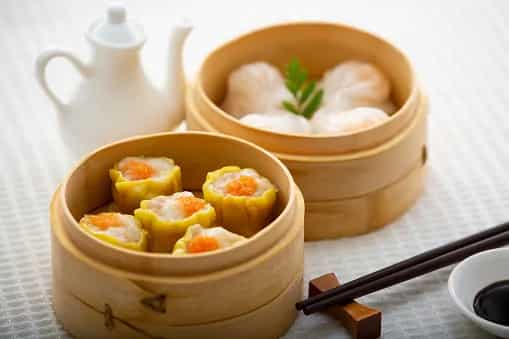 Wontons are another type of Chinese dumpling that can be prepared in a variety of ways depending on the filling and whether they are boiled, steamed, or fried. A typical wonton, on the other hand, is made with a square sheet of dough made from wheat flour, egg, and water (similar to Italian ravioli, but slightly thinner), a scoop of filling placed in the centre of the square, and the dough then sealed in some way, either by folding, crimping, or even tying the bundle up with a chive shoot. Ground pork and shrimp are common fillings, although like with all Chinese dumplings, there are traditional and unorthodox variations based on locale. Boiled wontons are popular and are typically served with a thick broth or soup. Fried Japanese ground beef wontons. Pithes And Pulis: The Rice Dumplings Of Bengali Celebration