What Makes Onam Sadya So Special? All You Need To Know

Onasadya - a feast fit for the Gods is one of the most awaited feasts. This grand gala feast, for Keralites, is surely a much-awaited affair. The festivity is not  complete without the grand, traditional vegetarian lunch called Onam sadya (Sadya' means 'Banquet' in Malayalam) on the Thiruvonam day (the most important day of Onam celebration). Malayalis across the world seem excited about this day. The traditional sadya of the Kerala’s harvest festival sees dishes somewhere around 20 – 28 types which vary from savoury to sweet and more. The dishes vary depending on region to region in Kerala, for example, puli inji is favourite in central Travancore and Malabar areas and also the fact that Sadya doesn’t see much prominence in the Kasaragod region.

In appreciation of King Mahabali  this is celebrated who is supposed to visit his land once every year and hence Onam celebrates this home-coming. The preparation of this elaborative and special meal starts right from pretty early morning and for most families cooking sadya is always a much celebratory activity as the whole family get together to cook. The family together decks up in Onakkodi, or new clothes. Fresh and washed plantain leaves are kept to serve the sadya. Banana and Yam chips are made in advance and breakfast is normally poovada, a dish prepared for Thrikkakara Appan (avatar of Lord Vishnu) as a ritual.

One main dish in this meal is Avial, Thoran and Pachadi, while the former is mostly little gravy and mushy the later made using either pineapple, beetroot or any other vegetables and fruits. Once the Sadya meal is over, not to miss is that the elders of the family are served betel/paan leaf and areca/ supari nut after the meal.

While most think that Onam is an all-vegetarian affair, but around Kannur and Kochi there are fish like avoli and aykura sees the meen vevichathu  and chicken fry that are a part of the sadya traditions in some parts of Malabar. Even from the sambar to pachadi, they taste much different in these regions as here they use coconut paste in sambar unlike other regions. 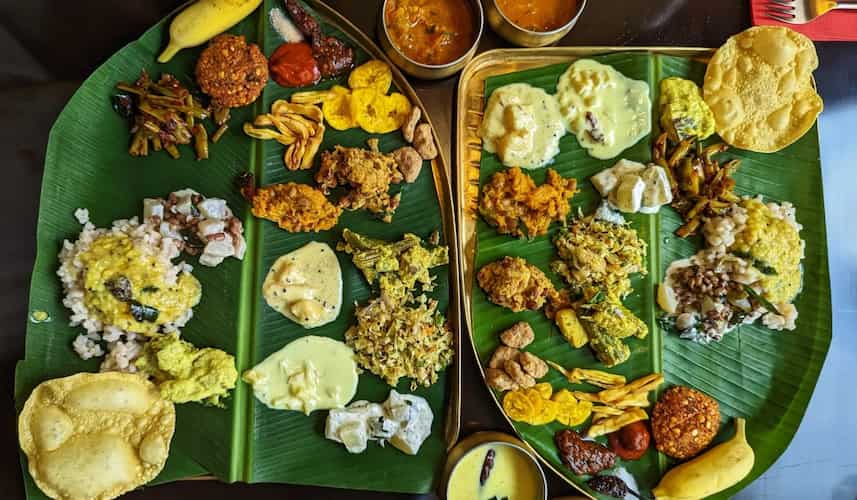 How to Sadya relished

Served on a banana leaf, Sadya is always eaten sitting on the floor cross legged. You are supposing to eat the meal with your hands and that surely enhances the taste of the sadya. The order in which the items are placed is different across communities and regions but the serving starts with chips and pickles first and Avial is always on the right hand side of the leaf. This flavorful veggie preparations sees the goodness of most vegetables that’s in the season and the sweet, spicy, and tangy taste makes it even more delectable.

Sadya is a balanced diet, for example Sharkara varatti is great for salivary gland activator while the Inji thairu is great for digestion and the pickles are palette cleansers.

This traditional meal is all about bringing the whole family during the festive season. This meal has be to experienced at least once in a lifetime!

Onam Sadya 2022- Happiness Of Harvest On Your Plate