Walnut Cake: This Soft And Fluffy Dessert Is Hard To Resist

Walnut Cake is a deliciously easy recipe. The cake is so soft and fluffy, and there’s also a recipe for a lovely vanilla frosting.This would make a nice cake for the holiday season. Nigel Slater, a British food writer, decided to create his ideal last supper about two decades ago. His humble yet admirable choice: a coffee cake with walnuts. “As homemade cakes go, I am not sure anything comes close to this one,” Nigel wrote in an oft-cited column, rhapsodising, “There is no cake so tender.”

Unlike American coffee cakes, British coffee and walnut cakes aren’t typically enjoyed with your morning brew. This cake is more like a fluffy layer cake enriched with coffee and ground walnuts, sandwiched with coffee buttercream, and adorned with more walnuts. Though its exact origins remain somewhat obscure, the dessert has evidently been around for a while. A 1934 advertisement for McDougall’s self-rising flour featured a ‘new recipe’ that was none other than coffee and walnut cake. Today, the cake is ubiquitous across the pond, regularly appearing at bake sales and tearooms alike. As part of the first-ever episode of The Great British Bake Off, the dessert was a technical challenge, while host Mary Berry asked contestants to make a Battenberg-inspired variation in the second season. It’s a cake so good that you won’t be able to resist gorging on it. Here’s the recipe. 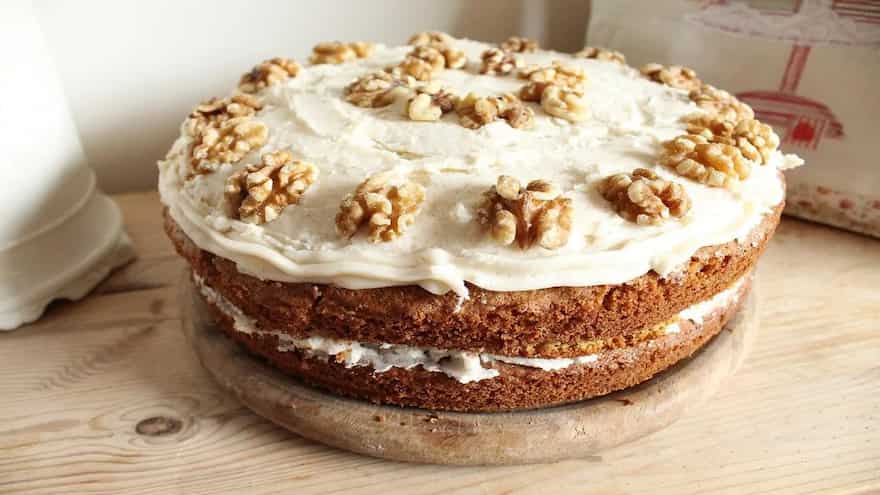 For the walnut cake

•    For the walnut filling

2.    Prepare three round cake pans with butter and flour.

3.    Combine the flour, crushed walnuts, and salt in a mixing bowl. Place aside.

4.    Combine the yolks, sugar, and oil in a separate bowl. Mix well with a hand mixer.

5.    Add the water and flour mixture alternately to the egg yolk mixture.

6.    Then, fold in the beaten egg whites and sprinkle the baking powder in after the mixture is well incorporated. Combine well.

7.    Spoon the mixture evenly among prepared baking dishes and bake for 20 minutes.

1.    Combine the condensed milk, butter, and nuts in a saucepan over medium-low heat.

2.    Mixture will begin to loosen from the pan once you've stirred it for a while.

3.    Stir in the heavy cream until the mixture comes up from the bottom of the pan again.

3.    Place one cake layer on a serving dish and top with a layer of walnut brigadeiro.

4.    Top with another cake layer, then cover with the rest of the brigadeiro and finish with the last cake layer.

5.    The meringue must be spread over the whole cake and browned with a torch.

Recipe: This Coffee Walnut Banana Bread will give the right kick to your morning