Rajasthani cuisine is the cuisine of Rajasthan, which is located in North-West India. Both the residents' warlike habits and the lack of ingredients in an arid location impacted it. It was preferred to eat food that could last for several days and could be eaten without heating. The cooking has been affected by a lack of water and fresh green veggies. Bikaneri bhujia, Mirchi bada, and Pyaaj kachori are some of the snacks popular there. Other famous delicacies include Dal Baati, malaidar special lassi (lassi) and Lashun ki chutney (hot garlic paste), Mawa lassi from Jodhpur, Alwar ka mawa, Malpauas from Pushkar and rasgulla from Bikaner, "paniya" and "gheriya" from Mewar. Jaipur is the capital city of Rajasthan. It is famous for its architecture, culture and most importantly cuisine. This city attracts tourists in abundance. Jaipur is also known as the pink city and is home to some delicious Rajasthani food in addition to some wonderful and bustling tourist attractions. They represent the region's rich palatial heritage and hence might be considered the city's finest belongings.

Here are some Rajasthani snacks to try in Jaipur-

Kachori is a deep-fried puff pastry stuffed with a spicy dal filling. Pyaaz kachori has a delicious onion filling blended in with a variety of spices. Pyaaz Kachoris are slightly larger and come with a variety of sweet and sour chutneys on the side. Since 1965, the Samrat Restaurant in Jaipur has been serving the greatest Pyaz ki Kachori with their all-time favourite Dahi Amchoor Chutney and Tamarind Chutney. This is Jaipur's variation of the chilli fritter, which is popular throughout India. It is not for those who have a zero-tolerance for spice, as the name implies. In this dish, deep-fried long green peppers are stuffed with mashed potato and covered with besan. This fiery, scorching appetiser is a must-try. It is different from other vadas in the way that the regional spices and asafoetida (hing) is added to the gram flour batter into which the green wax pepper is dipped and then deep-fried. This dish is available at the Ghungroo Seth Vada Pav Company and Rawat Misthan Bhandar. 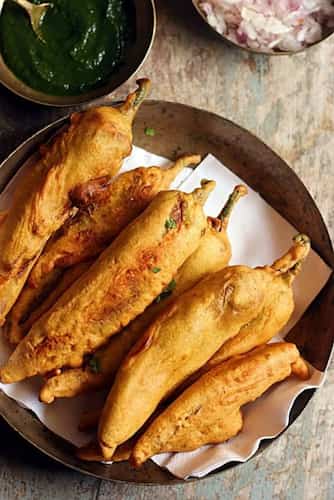 Ghevars are delicious delicacy shaped like honeycombs and served with sugar syrup or rabri (sweet thickened milk). Jaipurites prepare it during all major festive seasons, and it is only available in Rajasthan. But don't be concerned. It will be available all day, every day, in the city's street shops. Flour, cornflour, ghee, and kewda essence are used to make the base. Finally, pistachio or almonds are added to the rabri-topped ghevar to add a little crunch. Some of the places that serve this delicacy are Laxmi Mishtaan Bhandar, Rawat Mishthan Bhandar and Bombay Mishtan Bhandar. Rajasthani delicacy no less than a cake/ pinterest.com

The king of all kachoris, or a king-sized kachori, is the Raj kachori, which is a royal, opulent, and splendid dish. It is a  crispy fried shells (kachori) packed with potatoes, boiling moong dal, yoghurts, spices, and chutneys, and is a famous Indian chaat. Since 1727, Laxmi Misthan Bhandar has been a traditional halwai shop. Try their Raj kachori if you're looking for a kachori. It's not your standard kachori; it's more akin to a chaat, but it's absolutely worth trying. It's made with pulses and sweet and spicy yoghurt, and it'll fulfil all of your hunger pangs. The city's best food in Jaipur is found on the fast-food streets. Dahi Vada, a deep-fried delicacy topped with yoghurt, is one such example. Vada is a savoury doughnut variation. It's created with urad dal, moong dal, sabudana, and mild spices in a batter that's deep-fried to offer you a crunchy and flavorful snack. This is topped with chilled yoghurt, roasted cumin powder, moth dal, and black gram, as well as chaat masala, spicy green chutney, sweet tamarind chutney, freshly cut coriander leaves, and chaat masala. This delicacy is available at Tiwari Calcutta Chaat Bhandar, Panditji ka Dahi Vada and  Laxmi Misthan Bhandar. 3 Street Foods In Jaipur You Must Try!

Jaipur Food Guide: 5 Classic Foods Of The Pink City And Where To Find Them

These Restaurants Are Known To Serve Best Kachoris in Jaipur