As per a family member, 365 varieties of food were arranged considering 365 days of a year. Indians are known to celebrate every festival with a lot of fervour. From Holi, Diwali, Navratri to Lohri or Makar Sankranti, all these festivals are one of the major festivals in India, and we leave no stone unturned to make the most of these days. Makar Sankranti, for instance is one that involves a lot of preparation in advance including that of a lavish feast. The festival marks the sun's transition to Makar or Capricorn, marking the end of the month with winter solstice, and the onset of longer, warmer days. In India, people start prepping for Sankranti days in advance, with the preps for special desserts including coconut ladoos. One can find all of the family members coming together to put up a great show for the festival. Right from grating coconuts to moulding ladoos to crushing the jaggery, there is a whole lot of effort that goes behind Makar Sankranti celebrations. And some go much beyond the usual, especially when the son-in-law of the family is involved.

In India, the son-in-law is seen with the highest of regards in the family, and on festivals it is almost customary to prepare a lavish meal on his visit to make him feel special. But one family, went out and about for him on the occasion of Makar Sankranti. An Andhra family from Narsapuram in West Godavari district celebrated the festival of Makar Sankranti by inviting the son-in-law home for a meal, and we are sure he wouldn’t be able to forget this meal ever. The family prepared a whopping number of 365 different dishes especially for him and his family for the festive feast. Shocked, aren’t you?

As per a report in ANI, 30 different varieties of curries, rice, Pulihora, Biryani, traditional Godavari sweets, hot and cold beverages, biscuits, fruits, and cakes, Paan and Imarti (Indian sweet) were served. The immediate family members from the bride's and the groom's side attended the pre-wedding bash. "To show our love for our future son-in-law, 365 varieties of food were arranged considering 365 days of a year" a family member told ANI. 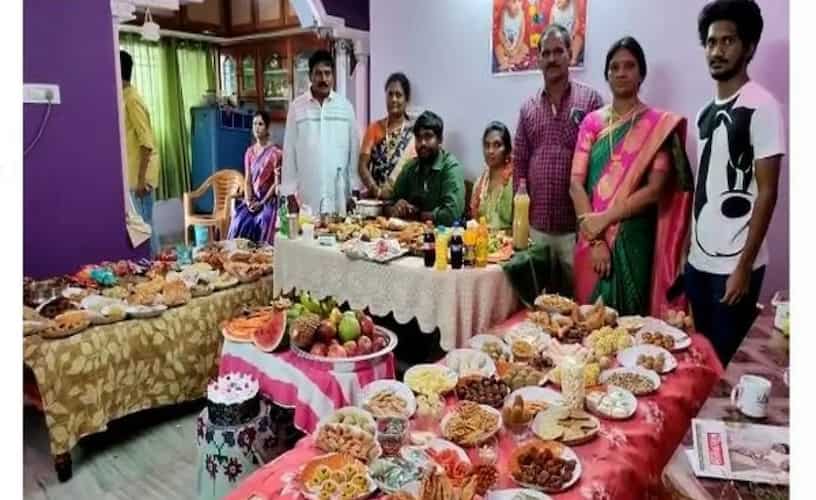 Both East and West Godavari districts are known for their warm hospitality, as they treat their guests with a lot of obligingness. But this gesture of the family of the bride went way beyond and became the talk of the town soon after. As per reports, it was the bride's grandfather Achanta Govind and grandmother Nagamani, who actually came up with the idea and organised this treat, as the festival came right before the impending wedding.

What do you think about the grand feast? Let us know.

3 Foods You Must Donate This Makar Sankranti

Feeding Kids And Crows, This Uttrakhand Snack Has A Special Place In Makar Sankranti

Makar Sankranti: Move Over Kheer, Glam Up Your Festive Spread With This Saffron-Rose Phirni

Celebrate Makar Sankranti With The Goodness Of Oats-Til Laddoo