Varun Dhawan Shares A Beverage With Janhvi Kapoor, Can You Guess?

Read more to find out which beverage did Varun Dhawan and Janhvi Kapoor’s share to mark the start to their journey as co-stars. There’s nothing that soothes the Monday blues like a comforting meal and a soothing beverage. While foodies brace themselves, for the week ahead by digging in to their favourite food and sipping on a hydrating drink, Varun Dhawan and Janhvi Kapoor, who are all set to work together on their upcoming movie ‘Bawaal,’ seem to have taken a similar route. Varun recently shared a photo to his Instagram story that featured Janhvi smiling and talking on the phone to someone. A cup of coffee and a snack lay in front of her and Varun, who was clicking the photo. The duo reportedly, left Mumbai to begin the movie’s shooting in Lucknow. 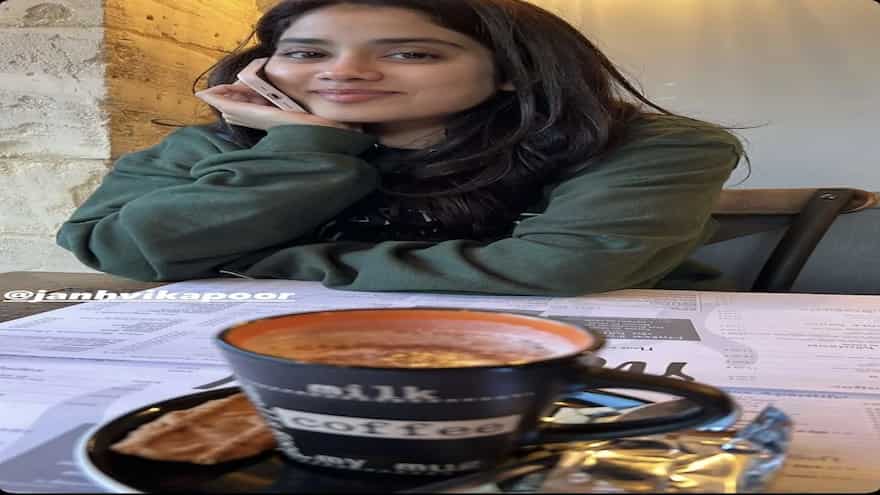 Varun’s love for the hot beverage that he was seen sharing with Jahnvi is nothing new. The actor keeps sharing photos of his fondness for coffer to his social media. Recently, he shared a photo holding a Starbucks coffee in his hand, as he flaunted his abs. He had captioned that photo encouraging netzins to pause everything they are doing, and hydrate with a coffee first. He wrote, ‘go get it, but first get some coffee.’ Varun was previously also in the news for sharing his cup of coffee with the papparazis, who were busy clicking his photos as he made it to his car, after his shoot, in Mumbai. Dhawan frequently puts up stories enjoying coffee on his Instagram handle and enjoys brewing a cuppa for himself, every once in a while.

Janhvi Kapoor, who is a self-confessed foodie, takes to social media from time to time to post about the various dishes she enjoys eating. Janhvi recently posted a spree of photos enjoying Lasagna and a pizza made from buckwheat base to her social media. Previously, she posted photos from the majestic Italian feast that she enjoyed, including pasta arrabbiata, spaghetti alfredo, bruschetta and more. However, don’t be under the impression that this actress only enjoys the Italian cuisine. Janhvi has time and again posted about her fondness for south indian delicacies, and is always posting photos of her eating festive bites on holidays like Onam.

Food is an integral part of everyone’s life and stars keep on posting about the treats they consume as and when they get time for a break from shooting. As the shooting for Bawaal is likely to happen overseas, Varun and Janhvi’s fans and followers might get to see the duo explore regional delicacies of some European countries.