Try This Delicious Potato Soup Made With Leftover Baked Potatoes

The art of sustainable way of cooking using leftovers, can help save tonnes of cooked food that goes to waste every year. Cooking with leftovers is an art that everyone should learn to master in their kitchen. Did you know that according to a recent census, it was found that an average Indian has been annually wasting around 50Kgs of cooked food, while 14% of Indians continue to suffer from malnutrition? Food that’s usually left over after majority of it has been consumed in a meal, can be used to make new dishes that are delicious and healthy. For example, left over cooked rice can be used to make kheer, by just adding in a few ingredients like cardamom powder, milk, sugar etc.

Cooking with leftovers is completely safe and one needn’t worry about the food being stale. The best way to cook with leftovers is to cook them within a day’s time, so that the ingredients remain fresh. The problem of food wastage can be tackled by us, if we start to cook with leftovers, one kitchen at a time. Many recipes involve using most parts of fruits and vegetables which are often discarded because they are thought to be useless. Chef Ranveer Brar has advised his followers in a recent video to not throw away the stems of coriander, but rather use them to marinate your chicken. The coriander sticks lend a freshness to the dish. Similarly, did you know there’s an authentic delicacy found in the cuisine of Karnataka, in which peels of orange are used in sabzi? 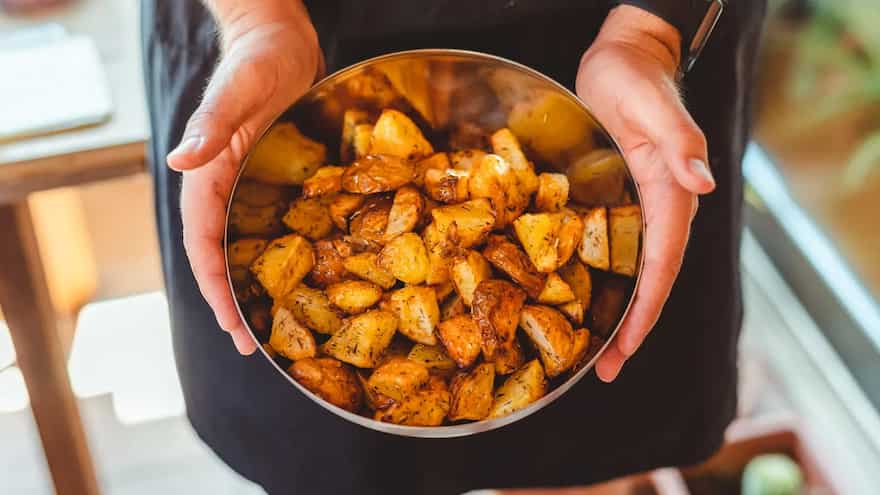 An ingredient that’s used most in Indian households in dishes ranging from chicken to paav bhaji is potato. We are always left with a surplus of this vegetable because of its versatility as an ingredient in Indian cooking. Using leftover potato to whip up a new dish can leave you with a tasty soup. How’s that? If you have any leftover roasted potatoes, then Chef Kunal has the perfect recipe for you, which recreates a potato soup using the leftover baked potatoes.

If you’re feeling inspired to engage in the art of sustainable cooking and are looking for an easy recipe to start with, we suggest that you make use of some leftover baked potatoes and try out this recipe by Chef Kunal:

Beat The Heat With These Yummy Desserts Made Using Leftover Food

Tasty Frozen Yoghurt Dessert Recipes That Are A Must-Try