Normally, whenever we think of 'South Indian cuisine', our mind shifts to the idlis, dosas with coconut chutney that makes the morning fix. Also, the rich curries made by using spices like curry and mustard leaves are hard to resist. In beverages, imli or kokum sharbat make up a great drink. As we focus on the savoury side, the decadent desserts mostly take a backseat. Many marvellous southern creations can make any sweet lover get hooked for life, from the ghee-enriched Mysore Pak to creamy Rava Kesari. So, let’s rediscover the traditional delights of South India.

Just like you eat semolina pudding in the North, people eat Rava Kesari with milk in the south. Although this dessert is made like halwa, milk is used instead of water, but the flavour of saffron makes it unique. You can also easily make this Rava Kesari at home. 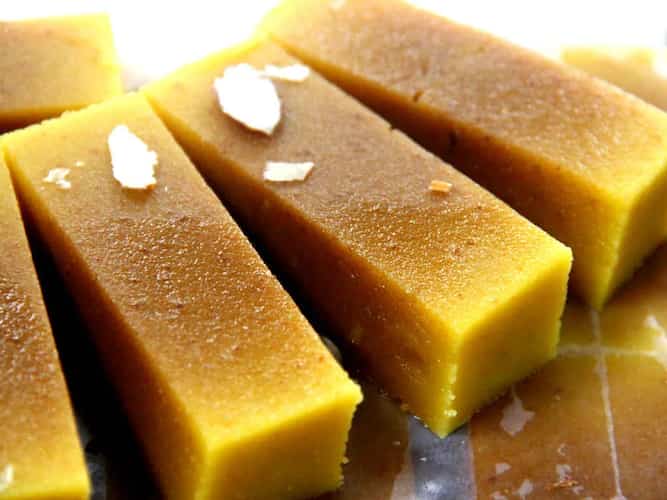 You will find this famous south Indian culinary dessert in every restaurant. This dessert is made from gram flour. Pak is a Kannada word defined as sweet sugar syrup. Four things, gram flour, sweet sugar syrup, desi ghee and oil, are used to make Mysore Pak.

Kozhukkatta is known as modak and is made up of rice, coconut and jaggery. This dessert is prepared by mixing jaggery, sesame and dry fruits in grated coconut-rice flour. It is made in milk and often offered as prasad in many traditional festivals or puja.

Unni Appam is a sweet, healthy snack made from rice, jaggery, banana, roasted coconut, roasted sesame and cardamom. You can easily find this dessert in south Indian restaurants!

Payasam is a south Indian kheer but is made of sevai instead of rice. Apart from this, sabudana, dry fruits, sugar and ghee are also used in it.