Tracing The Origins Of Cream Rolls

The cream rolls evoke feelings of nostalgia. For a long time, these flaky pastry cones filled with cream reigned in Indian bakeries. The cream rolls evoke feelings of nostalgia. For a long time, these flaky pastry cones filled with cream reigned in Indian bakeries. Today, there are thousands of possibilities to pick from, since bakeries are brimming with new items influenced by the western market. However, there was a time when only a few things were shown on the shelves of glass-cased bakery displays.

Cream rolls, pineapple pastry, and Black Forest cake were popular items, and many people still remember them fondly. We, who as children touched the refrigerator displays of bakeries with our tiny hands and popped out our eyes, deciding to buy, still adore them.

What do you think, who invented cream horns? According to most reports, cream horns originated in Vienna, Austria. It's worth noting that there are two comparable desserts with German names. Schaumrollen is straight tubes of puff pastry that are open on both sides, and the form used to produce these is the same mould used to make Italian cannoli. Schaum, which means meringue in German, implies that these pastries were filled with meringue.

The other dessert is called Schillerlocken, and it is the German word for cream horns, or cream rolls as they are known in India. Why is Schillerlocken used? According to Wikipedia, this dish was named after Johann Christoph Friedrich von Schiller (1759-1805), a German poet, philosopher, historian, and dramatist. It is unknown whether Schiller loved cream horns or not, but there is a painting of the great poet, painted by classicist Ludovike Simanowiz, in which he has gorgeous, blond, and immaculate curls. Those locks allegedly inspired the name of these delectable pastries - Schillerlocken, strange, right? 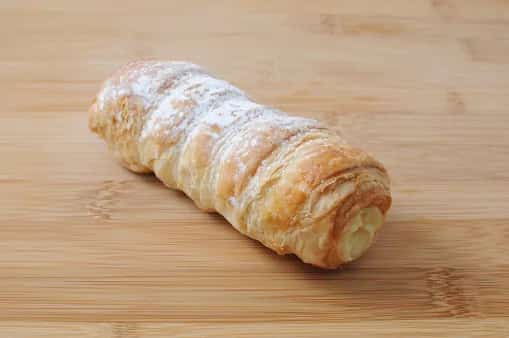 1. Start by cutting a sheet of puff pastry into a long, ribbon-like length. As many pieces as you like, cut. Make sure that the breadth of each piece is just right—neither too wide nor too thin.

2. Take a piece of the puff pastry sheet and roll it around a wooden dowel. Additionally, rotate additional objects around the dowels. Now, bake them for about 40 minutes at 180 degrees Celsius.

3. Remove from oven when finished, then allow to cool. Remove the wood from the cooked pastry rolls once they have somewhat cooled.

4. In the meantime, combine butter, milk, powdered sugar, and vanilla extract in a bowl. While continuing to stir the mixture, slowly add the milk.

5. Once finished, place the mixture in a piping bag and roll it. The piping bag's tip should be cut. Take a puff pastry roll, and fill the centre and opening with the ingredients.

6. Serve the freshly made cream roll right away.

Decline Of Desi Bakeries: An Ode To Fan, Cream Rolls And Rusk